Sri Lanka Briefing Note No 16 : Approaching Elections and Implications for the Transitional justice 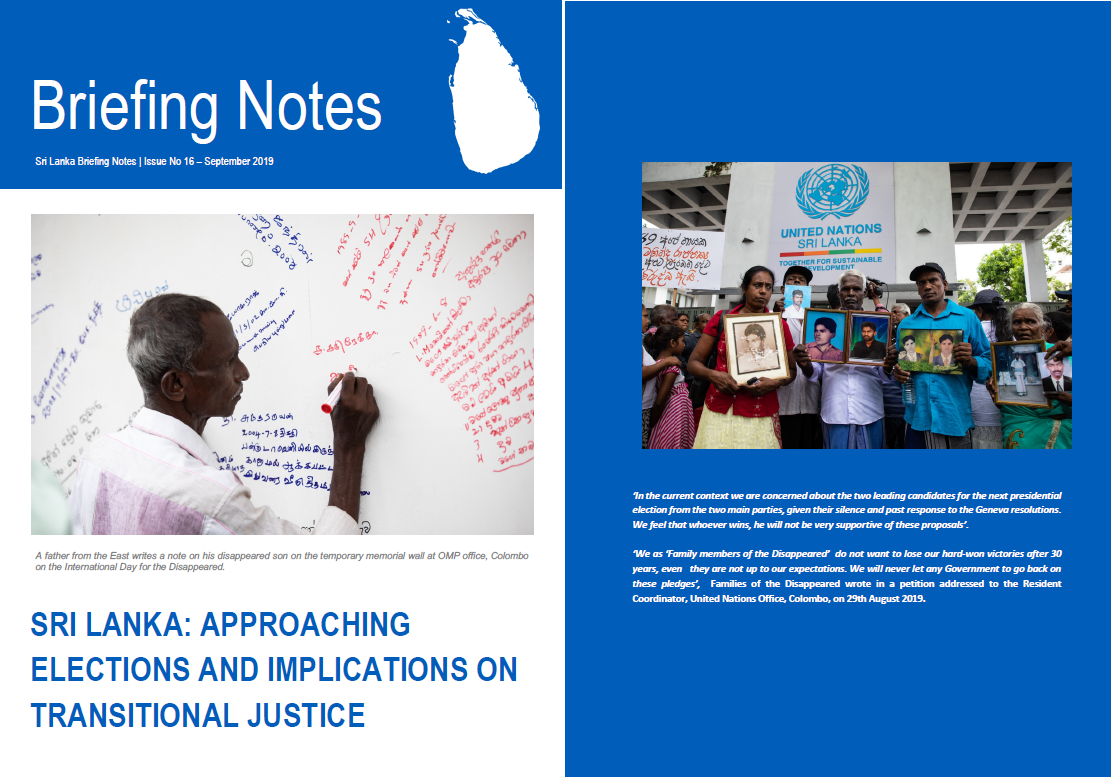 Sri Lanka is going into another presidential election in a few weeks with unresolved human rights issues and undelivered promises in hand. The Executive Presidency continues unabolished despite repeated promises of the presidential candidates who came to power in the last 25 years. Though the 19th Amendment to the Constitution trimmed the powers of the Executive President , the presidency will be strengthened if the authoritarian regime of the Rajapaksas return.

The constitutional reform process has come to a halt. The governing coalition has split up. The conversation on devolution of power to the regions where Tamil people live, no longer finds a place in the mainstream political discourse. The transitional justice process which is progressing at an unimpressive pace, faces the risk of discontinuation.

While economy, democratic reforms, and human rights were at the center of political debate during the previous presidential election, economic and national security concerns dominate the current discourse. Easter Sunday attacks by Islamist extremists have brought the issue of national security to the forefront.

The emergence of militant Sinhala Buddhist groups is a new phenomenon. Violence and hate speech directed at Muslims have reached unprecedented heights. Fake news and propaganda on social media have left the relationships among ethnic groups volatile.

The 2015 coalition which brought President Sirisena to power with the promise of upholding human rights and democracy has disintegrated. Former Defense Secretary Gotabaya Rajapaksa emerges as the most likely candidate to win the presidential election in 2019. This development threatens the protection of democracy and human rights in Sri Lanka, particularly, the rights of minorities.

Read the full report as a PDF:SLB Briefing Note no 16 September 2019