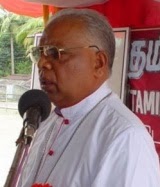 The Bishop of Mannar, Mgr Rayappu Joseph has called for an international investigation to ascertain the truth about alleged war crimes. He said: “Given that most of the Tamils in the north and east of the country no longer have confidence in an internal process. This will contribute to reconciliation”.
Bishop Rayappu Joseph, pointed out that many priests, lawyers, journalists and activists who have tried to cooperate with the institutions on the topic of “war crimes” have been threatened and intimidated. “On many occasions, the police and the Commission for Human Rights have even refused to accept complaints”, he said.

ecause of this position taken – while the Sri Lankan government categorically rejects the idea of an international investigation – the Bishop has been labelled in some circles as “a political activist”, but Mgr Rayappu replies: “There are too many controversial issues in Sri Lanka: people who disappear, others arrested and illegally detained, tortured or killed in prison. I hug, talk and deal with the aspirations of the faithful who live in my diocese and, more generally , throughout Sri Lanka. For me it is a human, spiritual and religious mission”.

The Bishop asks: “What need is there to maintain such a high number of armed forces in the North and East of the island? Why can’t one completely restore the civil administration in those areas, such as in the rest of the country?”.

Mgr. Rayppu denounces “the colonization sponsored by the state in the Tamil areas”, to create an electoral imbalance and progressively eliminate the language, the culture and customs of a people.According to the Bishop, “In Sri Lanka we have a lot to learn from South Africa. There, the majority was dominated by the minority; in Sri Lanka there is a majority that dominates a minority. In Sri Lanka, the government, which is accused of war crimes and massive violations of human rights, is still in power, and is reluctant to committing itself in genuine dialogue”.