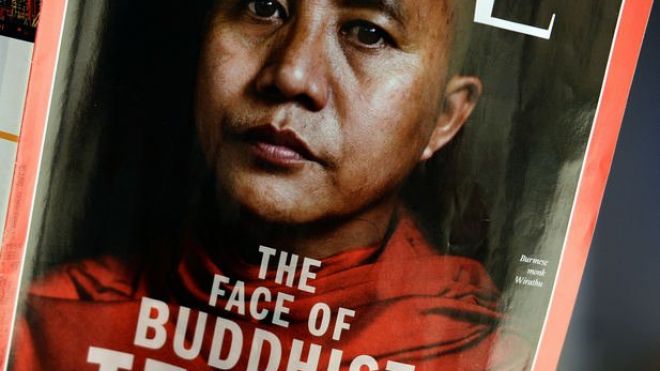 AFP
COLOMBO (AFP) –  Sri Lanka has banned July 1 issue of Time magazine over its cover story on Myanmar’s Buddhist-Muslim clashes, which it said could hurt religious sentiment on the island, an official said on Tuesday.
Customs department spokesman Leslie Gamini said they held the issue because it carried a photo of a prominent Myanmar monk under the headline: “The Face of Buddhist Terror”.

“By operation of law these magazines will be confiscated,” Gamini told AFP. “We did not allow this issue to be distributed in Sri Lanka because we felt it could hurt the religious sentiments of the people.”

Buddhist-majority Sri Lanka, where tensions with Muslims and other minority religious communities have been rising, is the second country to censor the edition after Myanmar also blocked it.

The online version of the magazine was still available, however.

Religious tensions spiked in Sri Lanka this year after a radical Buddhist group objected to the halal certification of food in the country, overseen by Muslims.

President Mahinda Rajapakse, who is a Buddhist, urged monks earlier this year not to incite religious hatred and violence.

Several episodes of religious fighting in Myanmar have exposed deep rifts in the Buddhist-majority country and cast a shadow over widely praised political reforms since military rule ended two years ago.

In March at least 44 people were killed in sectarian strife in central Myanmar with thousands of homes set ablaze.
Communal unrest last year in the western state of Rakhine left about 200 people dead and up to 140,000 displaced, mainly Rohingya Muslims.