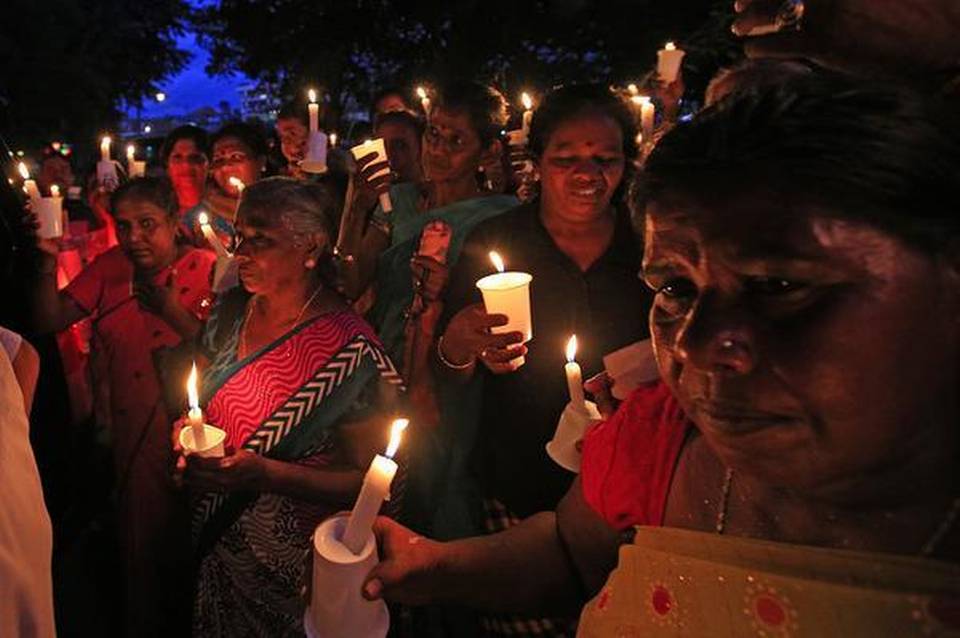 Some of the lands of survivors are yet to be released, relatives are still missing and reconciliation is afar.

Given a choice between living in a camp for displaced persons and in a home of his own, Dinesh Kumar would have chosen the latter any day. But nothing prepared him for the daily battle at his new house.

“I go to the sea to fish, but the catch has fallen drastically in the years we were displaced. I do some home gardening with my wife, we barely manage,” said the 30-year-old, standing in front of his small, Army-built house in Tellippalai, in Jaffna peninsula. Authorities have named the colony ‘Nallinakkapuram’ (colony of reconciliation). But for residents here, concerns over finding livelihood and drinking water have trumped the relief of being back on their land.

Over the last couple of years, over 80 families have relocated here, after being displaced for decades during Sri Lanka’s three-decade-long civil war between the state armed forces and rebel Tigers. The war ended 10 years ago with a brutal finish, as the armed forces defeated the LTTE. It claimed 40,000 civilian lives in the last phase alone, leaving behind a trail of grief and mass destruction.

For the survivors, healing hasn’t been easy. The post-war efforts of the two governments in power since 2009 have at best been patchy, and grossly inadequate, going by several residents’ accounts. With justice out of sight, reconciliation appears even harder for some. Nallinakkapuram residents pointed to gaping holes in the roof of their homes built by the Army. During the rains, many are forced to seek shelter elsewhere. Residents in some other areas, who tried building their own homes with foreign donor grants, often found themselves trapped in debt. The grants proved insufficient amid spiralling costs and jobs remain scarce in the war-hit areas.

The lack of jobs and the pressure of predatory loans, especially among women, have been recurring themes across the Northern and Eastern Provinces, which have tried bouncing back for a decade now. A Presidential Task Force has been working on reviving old factories to generate employment, but the pace has hardly helped, according to many.

Emerging local conflicts over land and water among former and newly resettled residents have not only fanned tensions within the community, but point to the many challenges in resettlement.

Seemingly ‘bread-and-butter issues’, they add up to a stifling post-war reality that makes everyday life significantly harder for the war-hit community. “We lost our homes, we lost our loved ones. Today, as we try to build a new life for our children, we are struggling to make ends meet,” said a resident, who asked not to be named, citing possible “action” from the military. “Why take a risk,” he said.

Ten years after the war, there are families in the north who are still agitating to retrieve their military-held land. Most of the private land held by the Army has been returned in the last few years, but the military still holds considerable amount of state land which, residents say, ought to be used for the public, or for the thousands who don’t make it to beneficiary lists of various projects because they are landless.

“With so few jobs available, a relative of ours worked in an Army-run farm until last year. But wearing the uniform they give and toiling in their farms made her uncomfortable after a point,” said a young woman in Kilinochchi, who spoke on condition of anonymity. “In our case I work in a garment factory, so she quit, but some people don’t have a choice.”

For those who were already concerned about the lingering military presence after the war, the recent Easter attacks have brought a new, but familiar concern. “The attacks were somewhere else, but the military started intimidating us in the north first. The number of security checks and the heightened surveillance is bringing back awful memories of those war years,” said Leelavathi Ananthanatarajah, an activist based in Kilinochchi.

“Some of us are hoping to go to Mullivaikkal tomorrow for remembrance, but we fear they will try to prevent us from even remembering the dead,” she said.

The post-war years have been rather unkind to many like her who are looking for their missing relatives. Enforced disappearances are among the chief concerns of many survivors of the war.

The Maithripala Sirisena-Ranil Wickremesinghe government set up the Office on Missing Persons (OMP) “only to show Geneva that they are doing something,” she said, referring to annual UNHRC sessions.

“We know their task is huge and not straightforward. But we say take some five cases where substantial evidence is available. Show us how you might deal with those cases for us to put our faith in the mechanism,” said Ms. Ananthanatarajah, secretary of an association of families of disappeared persons in the north-east.

Moreover, politicians who promise to deliver on accountability never fail to mention they will never punish a “war-hero”. “What are the chances that we will know the truth? And authorities speak of interim relief and reparations already. That could only mean that authorities think justice is dispensable for us, right? Surely it is not,” she said.