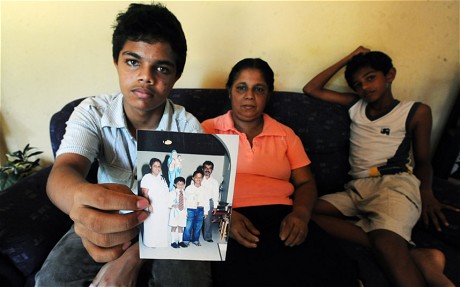 Additional Solicitor General (ASG) Sarath Jayamanna yesterday told the Supreme Court that the Army… …is not giving any support for the ongoing investigation into the disappearance of Journalist Prageeth Ekneligoda.

He added that a high ranking officer of Army was summoned to Attorney General’s Department and requested to support the investigations, but the Army did not respond to the request.

L/Cpl. Rupasena and Warrant Officer W.M.M.G. Upasena filed these FR Petitions stating that they are in detention over the disappearance of Prageeth Ekneligoda, but they have nothing to with that incident. They requested the Court to direct the CID to release them.

President’s Counsel Manohara de Silva appeared for them and submitted to Court that there was no proper detention order to detain them and all the dentition orders issued were illegal. Counsel J.C. Weliamuna, appearing for the wife of Prageeth, submitted to the Court that all the documents given by the Army were in favour of the suspect because they are members of the Army Intelligence Service.

Counsel requested the Court to give an opportunity for the wife of Prageeth Ekneligoda, Sandya Ekneligoda, to participate in the hearing of the two FR Petitions because she is the virtual complainant in this incident.

Court, while giving leave to proceed with two petitions, allowed the Sandya Ekneligoda to participate in the proceeding as the 9th respondent.