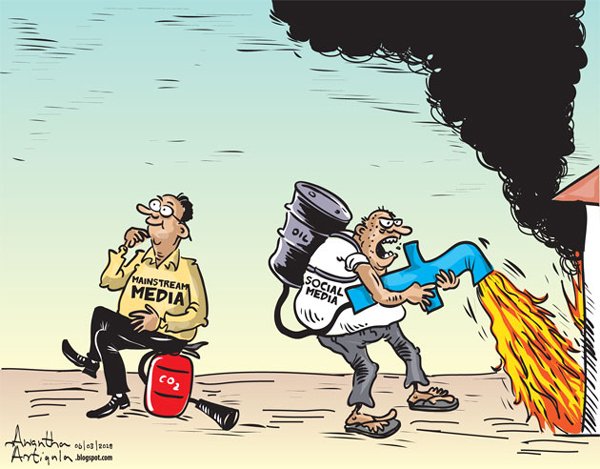 1. Further to the Key Update #04 on the previous situation report at 10.00am today, it is confirmed that 27-year old Abdul Baasith from Theldeniya area has died after mobs set fire to the building he was in. Cause of death is to be officially announced once the magisterial inquiry is complete. (http://www.dailymirror.lk/article/Digana-clash-Man-found-dead-at-a-shop-146822.html)

2. Police curfew which lifted at 6.00am today was re-imposed in Theldeniya & Pallekale Police Divisions in Kandy District around 11.00am, to be effective until 6.00pm today, due to continued volatile situation on the ground. It is expected that the curfew may be extended till tomorrow morning. (http://www.dailynews.lk/2018/03/06/local/144737/police-curfew-extended-teldeniya-pallekele)

3. Cabinet Co-Spokesperson Minister Dayasiri Jayasekara was quoted by Reuters “At a special cabinet meeting, it was decided to declare a state of emergency for 10 days to prevent the spread of communal riots to other parts of the country. He has said the Gazette notification announcing the same will be published today. Sri Lankan President promulgated a State Emergency a short while ago to redress the security situation prevailing in certain parts of the country. “The Police & Armed Forces have been suitably empowered to deal with criminal elements in the society & urgently restore normalcy,” according to a tweet by the President’s media division. (https://www.channelnewsasia.com/news/asiapacific/sri-lanka-declares-state-of-emergency-after-buddhist-muslim-clash-10018012)

4. Police announced that 24 suspects arrested for unruly behavior in Teldeniya and Digana areas have been remanded until March 19th by Teldeniya magistrate’s Court today. However it is unclear at this moment if the 24 people referred to here are the persons arrested initially on early morning of Monday the 5th of March immediately after peace was breached, and whose release was part of the original demands by the mobs which later became much violent as described in the previous update at 10.00am today. (http://www.adaderana.lk/news/46258/24-arrested-in-teldeniya-and-digana-remanded)

5. At the Parliamentary session today multiple speakers including the Opposition Leader R. Sampanthan,leader of JVP Anura Kumara Dissanayake, SLMC Leader Rauff Hakeem and MEP Leader Dinesh Gunewardena condemned the incidents and urged that government take immediate action to arrest the perpetrators. The Prime Minister responding noted that the Cabinet had discussed declaring a state of emergency if the situation persists. He also acknowledged that there were lapses in certain instances on the part of law enforcement officials and assured stern action against those who were found responsible. ( http://colombogazette.com/2018/03/06/jvp-suspects-violence-in-kandy-part-of-an-organised-plan)

1. Police curfew imposed in the Kandy administrative district, to combat a wave of racially motivated violence targeting minority Muslims unleashed by mobs following a personal dispute that resulted in the death of a Sinhalese man (on Saturday morning) was lifted at 6 a.m. today. Police Commandos (STF)/Military patrolling the area will continue according to police reports.

2. The Minister of Education had directed the closure of all schools in the district on 6th March.

3. Reports of dozens of houses, business establishments belonging to Muslims being burnt down and at least 3 Mosques (Muslim places of worship) being burnt by mobs that included Buddhist monks

4. One youth from Muslim community is reportedly dead, after mobs attacked his house and burnt the house while the individual was inside the house

5. Except for a statement issued late in the night of 5th of March 2018 by the Director General of Government Information Department, there has been surprising silence from both Prime Minister Wickramasinghe (who is also the Minister in charge of Police) and President Sirisena on the incidents.

Kandy
 An altercation had taken place allegedly between a group of allegedly drunkard men (later identified as Muslims) and a 41 year-old Sinhalese man on 22 February, resulting in him being seriously injured. Though there are various claims of the actual reason for the altercation, none were related to any racial or ethnic motives.

 However it is suspected that the status-quo changed as mobs came in buses from other parts of the country and coincidentally 4 prominent anti-Muslim extremists (BBS leader monk Gnanasara, Mahasohon Balakaya group leader Amith, controversial ‘activist’ Dan Priyasad and notorious monk Ampitiye Sumana from Batticaloa) went to Kandy on the night of Sunday the 4th of March 2018 onwards.
Additional Notes – Earlier last week violence was reported in Ampara in the Eastern Province:

Reactions and responses to Incidents in Kandy
– Government
 It was reported that President Maithripala Sirisena had directed the police and security sector to “hold an unbiased, independent investigation into incidents at Digana Kandy today”. It also said that President instructed government officials to start a “new special programme” with all responsible parties to create peaceful situation in the area.

 Finance Minister Mangala Samaraweera taking to social media noted that “Enough is enough. Inciting racial violence must be made a non-bailable offence and politicians who give leadership to such violence should be deprived of their civic rights”.

 The Government of Sri Lanka “strongly and unequivocally condemns the recent sporadic incidents of violence that had sparked off in Ampara and Digana,” the Government Information Director Sudarshana Gunawardana noted in a statement on behalf of the government.

 Prime Minister Ranil Wickremesinghe in his capacity as the Law & Order Minister has ordered another inquiry into the recent attacks on Muslim establishments in Ampara, as complaints of Police inaction have surfaced.

 The Office for National Unity and Reconciliation (ONUR) in a statement on 3 March noted that it was the responsibility of the Government to ensure that immediate action is instituted against all those who are responsible for the incidents. “We must learn lessons from the past and do all that is required to prevent a recurrence of those tragic times…. Let us not allow a small group of extremists to turn us back from our desired goal!”

Compiled by the Groundviews.  Read as a PDF for links provided: