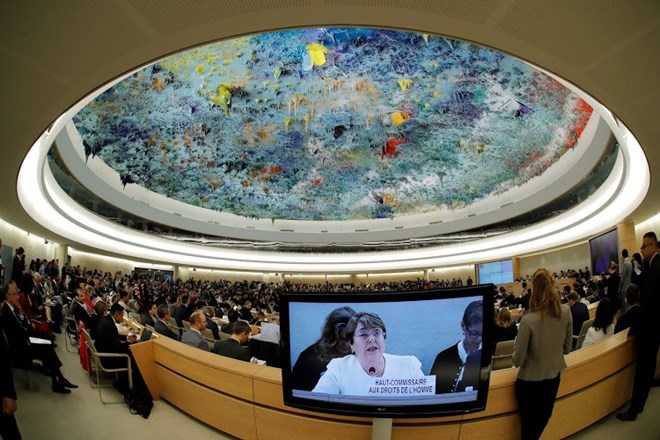 In early-September 2018, former Sri Lankan president Mahinda Rajapaksa proclaimed that his government’s fight against the Liberation Tigers of Tamil Eelam (LTTE) should not be considered an ‘ethnic war’, as ‘military action was not directed against the Tamil community’.[1] While the veracity of such a claim remains open to heated debate, its delivery at this point in time is not surprising. Mr Rajapaksa appears poised to stage a political comeback, and anti-Tamil assertions are catnip to his Sinhalese supporters—especially members of the military.[2] At the same time, a central element of his platform involves depicting current Sri Lankan President Maithripala Sirisena as a stooge to foreign influence for having endorsed UN Human Rights Council (HRC) Resolution 30/1—a move Mr Rajapasksa and his supporters consider a blow to the country’s sovereignty and an incursion on ‘processes that are exclusively the domain of Sri Lanka’s Parliament’.[3] In a further slap to victims, Mr Rajapaksa also characterized the well-founded allegations of human rights abuses by the ‘victorious Sri Lankan military’ as ‘false’.[4]

Fearing for his political life, President Sirisena moved to distance himself from the transitional justice program he had signed-up to:

Two days before the [HRC] sessions in Geneva, Sri Lanka’s president announced plans to move away from implementing [Resolution 30/1] with the aim of saving the security forces accused of war crimes and mass scale human rights violations. […] ‘I am going to introduce a new resolution at the UN […] mainly to get rid of resolutions and human rights allegations against the security forces […] and on the program we should implement with regard to LTTE terrorists.’[5]

Unsurprisingly, this statement was made before a group of Sinhalese activists.[6]

Days later, in her inaugural speech to the HRC, the new High Commissioner for Human Rights, Michelle Bachelet, ‘expressed her concern on Sri Lanka’s lack of progress in addressing war crimes’.[7] Echoing her predecessor, she called for ‘[m]ore progress in advancing accountability and truth-seeking’ and denounced ‘[r]ecurrent incidents of racist and inter-communal violence’.[8] Ms Bachelet said Sri Lanka had ‘moved too slowly towards meaningful implementation of the transitional justice agenda’.[9] Members of the Sri Lanka Core Group also lamented the lack of progress on important areas, emphasizing (among other things) that despite firm commitments by the Government of Sri Lanka (GSL), ‘national accountability mechanisms […] have yet to be established’.[10] Human Rights Watch later catalogued precisely how the GSL has ‘fallen far short’ on its transitional justice efforts[11]—points consistently raised by the Sri Lanka Monitoring and Accountability Panel (MAP) over the last three years.

On 15 September, amid the HRC session, it was again announced that President Sirisena would ask the UN to refrain from pursuing accountability for war crimes committed by Sri Lankan troops and that he would ‘instead call on the [HRC] to “remove these charges”.’[12] Ignoring the existence of Resolution 30/1, its two-year extension, and the last several decades of history, he disingenuously claimed that ‘[w]e can amicably resolve this issue’ and—even more brazenly—that ‘he expected “concessions” from the [HRC]’.[13] The move appears to have played well at home.[14]

And yet, despite his previous political bluster, President Sirisena’s delivery from the international stage was decidedly muted—presumably, to suit his audience. In his 19 September address to the 73rd UN General Assembly, the president was oblique with respect to his view on the GSL’s commitments under Resolution 30/1:

[W]e seek the respectful support of all, as we take steps in a progressive manner, to address allegations and implement resolutions, while protecting the independence and sovereignty of my country. Some expect quick action and short-sighted, short-term solutions. As a country which has suffered an almost 30-year-long conflict, I urge the respectful support of all, in ensuring the success of the journey we have embarked upon to unite the people who were torn by division in my country, to build feelings of unity and compassion, to dispel fear, suspicion, anger and hatred and take forward the beloved people of my country and strengthen and rebuild my beloved motherland as a strong and prosperous democracy. Our path forward must be stable and progressive and not one of haste that may be destabilizing, considering the complex and sensitive nature of issues that we face.[15]

Although the terms were vague, the message—to both his domestic and international constituencies—was clear: The contours of Sri Lanka’s ‘path forward’ will not be charted by the UN.[16] While the HRC should be supportive of any country making genuine efforts to reconcile conflict-affected communities, the evidence has suggested for some time that domestic politics in Sri Lanka will trump international commitments to human rights. Those holding out for the implementation of a credible criminal-justice mechanism under the terms of Resolution 30/1 can expect a very long ‘journey’ indeed.

Looking ahead to the HRC’s 40th Session in March 2019—when the question of Sri Lanka’s compliance is back on the agenda—a fresh approach is needed. And, fortuitously perhaps, recent events at the Council provide a potential solution. On 27 September, with respect to the situation in Myanmar, the HRC ‘overwhelmingly supported a resolution to set up an “independent mechanism” that will collect and analyze evidence of the “most serious international crimes” and prepare dossiers that will make it easier for prosecutors to bring cases to trial in national, regional or international courts’.[17] As noted by the International Commission of Jurists, the rationale behind such a mechanism is clear: ‘The passage of time increases the chances that critical evidence will deteriorate or be lost entirely, reducing the possibility of effective prosecution. An IIIM mechanism would ensure that evidence is collected, preserved and analyzed to a standard and methodology facilitating its use in national, regional or international courts.’[18]

Given the GSL’s continued bad faith under President Sirisena’s leadership, the distinct possibility of Mr Rajapaska’s resurgence, and the absolute certainty of the passage of time, the HRC should set up an independent evidence-gathering mechanism for Sri Lanka with a similar mandate to those on Syria and now Myanmar.

The MAP will issue a detailed report on this and other issues in advance of the HRC’s 40th Session. In the meantime, the MAP will attempt to engage with the Office of the High Commissioner for Human Rights with a view toward salvaging Resolution 30/1 as well as exploring alternative solutions for the victims of Sri Lanka’s civil war.

The MAP provides independent monitoring, advice, and recommendations, focusing on the effectiveness of accountability measures from a victims’ perspective. The views and recommendations of the Panel will enable victims and other stakeholders to participate more effectively in the process and thus enhance the legitimacy of the measures. For more information, please visit: http://war-victims-map.org/

For media enquiries on the above please contact: Richard J Rogers – [email protected]

[2]‘War Targeted LTTE, Not Tamils: Rajapaksa’, The Hindu, 13 September 2018 (Rajapaksa ‘is keen on a political comeback after being ousted by current President Maithripala Sirisena in 2015’.)

[4]‘War Targeted LTTE, Not Tamils: Rajapaksa’, The Hindu, 13 September 2018; see also ‘Sri Lanka President Rejects Foreign Pressure Over War Crimes’, Economynext, 26 September 2018 (‘Former president Mahinda Rajapakse crushed the Tamil Tigers in a no-holds-barred military campaign that ended in May 2009. He also insisted that forces under his command did not kill a single civilian and refused to accept any investigation.’)

[13] Ibid; see also ‘Sri Lanka President Rejects Foreign Pressure Over War Crimes’, Economynext, 26 September 2018 (‘Before leaving for New York, Sirisena had promised to unveil a raft of proposals and also make written submissions to the [HRC] in Geneva for its consideration at the next sessions in March 2019. “I will also make a written request to the [HRC] to settle the allegations against our troops”, Sirisena said on September 15 in Colombo. “I want to tell them to remove these charges. We can amicably resolve this issue”.’)

[14] See Nuwan Senarathna, ‘Rear Admiral Weerasekara to File Petition Against SL Resolution in UN’, FT Online, 18 September 2018 (On 17 September, Rear Admiral Sarath Weerasekara announced that he would ‘file a petition to the [HRC] against the [GSL] for co-sponsoring resolution 30/1’, accusing the government of ‘betray[ing] its people to fulfill the needs of […] foreign nations’. Such petition would be filed ‘on behalf of the entire nation and the soldiers who sacrificed their lives for their freedom’. Notably, he ‘welcomed the decision of President Maithripala Sirisena to speak at United Nation on behalf of the armed forces and recognize their value’.)

[16] See ‘Sri Lanka President Rejects Foreign Pressure Over War Crimes’, Economynext, 26 September 2018 (President Sirisena ‘made no reference to the UN [HRC] resolution seeking a credible investigation into allegations that Sri Lankan troops killed thousands of Tamil civilians in the final months of the war’. Despite previous assertions regarding a reprieve, ‘there was no fresh proposal’, but only a strident ‘assertion of Sri Lanka’s sovereignty’.)

[18] ‘Myanmar: Why an IIIM and Security Council Referral Are Needed Despite the ICC Ruling Relating to Bangladesh’, International Commission of Jurists, 13 September 2018.