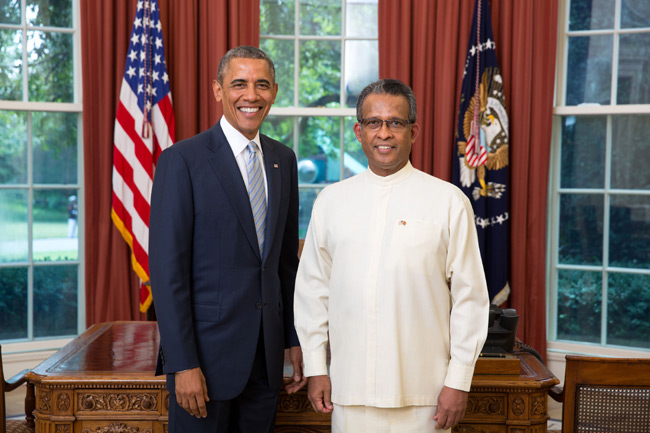 Contradicting Sri Lanka president Sirisena who has pleaded with USA president elect Donald Trump to save Sri Lanka from war crimes charges at the Geneva based UNHRC ,the Sri Lankan Ambassador to USA says that ” there is no question of the US interfering in this process”.

He was answering a question posed by Financial Times published Colombo with regard to the UNHRC resolution 30/1 of March 2014.

The question and Ambassador to the US, Prasad Kariyawasam’s answer is given below.

Q: What stance do you foresee the new US administration taking with regard to the UN resolution calling for an international probe on Sri Lanka’s alleged human rights violations?

And now the Government is taking action to promote, protect and uphold the human rights of all Sri Lankan citizens locally for the benefit of each and every citizen of our country despite whichever community, religion or gender an individual may belong to. It is puzzling as to why there is a tendency to view the strengthening of human rights locally with suspicion. After all, if human rights, justice and rule of law are strengthened, it is the citizens who will be empowered and their safety and security will be upheld.

Therefore there is no question of the US interfering in this process. It’s a domestic process. It is up to the Government to decide the level of international assistance required in the processes initiated by Sri Lanka itself.

Sri Lanka will require assistance for capacity building. This will help Sri Lanka strengthen the capacity of its own local institutions. Sri Lanka’s initiatives on human rights and justice are not driven by foreign governments but by the people’s mandate given to the Unity Government based on good governance principles and the Government’s commitment to also take steps to build a strong, united and progressive nation with strong institutions which will help to ensure the non-recurrence of conflict. Instability and possible scenarios of recurrence of conflict will hamper the economic progress of the country.

Complete interview can be read at  ft.lk