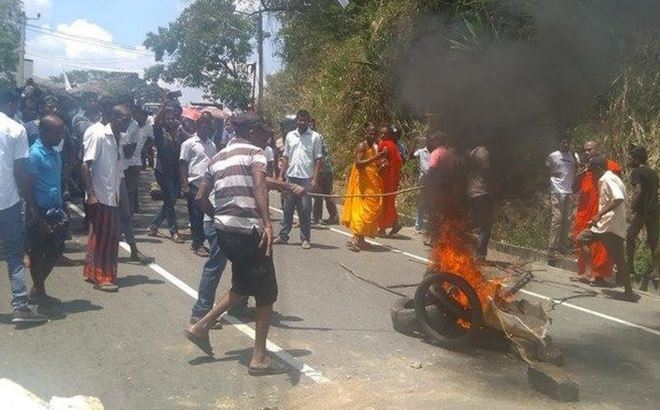 State of Emergency was delayed by the president for 7 days from 06th March 2018.

At this time  Sri Lanka Muslims are facing grave situation as their places of warship, business places and houses are being attacked by murdering extremist Sinhala Buddhist mobs.

Attacks started two days ago in a village called Digana has now spared to more towns and villages in the Kandy district.

Appeals for intervention by the besieged Muslims have not been responded by the law and order institutions and political leadership of the country. We have received calls from informed persons that agent provocateurs are attacking Buddhist temples in the guise of Muslims.

Reports reaching Sri Lanka Brief say that in some other districts too small scale gatherings are  taking place in support of attacking mobs and against Muslims.

Now Sri Lanka government has blocked ( although it is called filleting  by the government social media is not accessible right now)  the Face Book, Viber, Instagram, and Tweeter as a step to stop spreading false rumors. This is only to cover-up its inability   bring the situation under control.

International community needs to stress to the Government of Sri Lanka that safety of all communities is its paramount duty and importance of establishing rule of law in all affected areas asp.

Censorship of social media and state of emergency too should be restricted to shortest time possible.