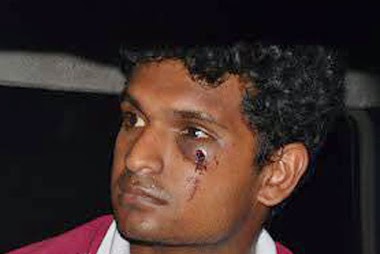 Of the 17 student activists arrested on Friday, four were admitted to the Accident Ward in the National Hospital yesterday, after sustaining injuries while in police custody.
However, the activists claim that two of the more seriously injured students have not been hospitalised despite pleas, a claim denied by the police. The Student Unions claim that the 13 students were brutally beaten by the police while in custody. The students were arrested at two different locations on Friday.
Four students were arrested near the Town Hall post office, while the second group of students, comprising 13 Allied Health Science (AHS) students, were arrested while travelling in a bus. Police officers in plain clothes and in uniform had boarded the bus the student group was travelling in and directed the bus to the Slave Island police station.
All 17 students have been remanded till May 19, after being produced before the Fort Magistrate on Friday night.
“They were taken to the police station by men in civils, and beaten in full view of the public. They were still bleeding when they were produced before Fort Magistrate Thilina Gamage,” said AHS Student Union spokesman Lahiru Madusanka.
The injured were brought to the National Hospital only around noon yesterday. Four students who required serious medical attention were warded, while the others were taken to remand prison, to be taken to the prison hospital if needed.
According to student activists, the students had been forced to remove their shirts before being brutally assaulted by the police while in custody.
However, Police spokesman Senior Superintendent of Police (SSP) Ajith Rohana said that the police used “necessary force” when the students “obstructed arrest”.
He denied claims that students who were injured were not given medical treatment for over 18 hours.
He said that they did not require any medical attention at the time of the arrest.
“It was in the morning that they complained of chest pains and other ailments, so they were taken to hospital today,” he said.
SSP Ajith Rohana also stated that the police would not hold any inquiry on this incident, and that the students are free to complain to any commission regarding the matter.
Despite the setbacks and arrests, the students were last night continuing their protests, demanding that the AHS Degree programme be extended to four years from the present three years. AHS students of all six universities are boycotting classes.
The protest campaign in front of Peradeniya University is on its 146th day, the one in front of the Galle bus terminal has continued for over 138 days, the protest in front of the University Grants Commission has been there for over 36 days, while the one in front of the Fort Railway Station has continued for more than 50 days.
The Higher Education Ministry and the Government Medical Unions have been pointing fingers at each other regarding the matter, without presenting the students with a clear solution.

University academics today condemned the abrupt arrest of the sixteen student activists yesterday evening, adding such actions will only further provoke students than solve their issue.

Federation of the University Teachers Association (FUTA) President, Dr. Chandraguptha Thenuwara speaking to Daily Mirror said intimidating students is not the response to the authorities’ failure to address student grievances.

“Students’ demands and concerns regarding the issue on Allied Health Sciences course quality and the reduction of the course duration are fair. They have been reaching out to the authorities for over a period of three months but have received no response,” he said.

Dr. Thenuwara went on to say that other concerns raised in universities countrywide by student groups demanding a raise of the Mahapola scholarship, accommodation issues as well as matters regarding the quality of their academic courses too are justified.

“We urge the authorities to release the arrested students immediately and reconsider their approach to resolving student grievances. We request the responsible authorities to put a stop to the harassment and arbitrary arrests of the undergraduates and instead, resort to negotiations and discussions with the students,” he added. (Lakna Paranamanna) DM