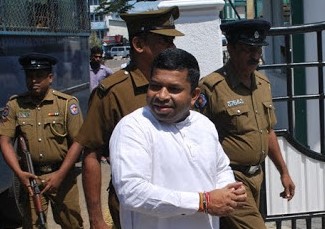 Parliamentarian Joseph Pararajasingham was killed by unidentified gunmen on 25 December 2005 while he attended Christmas mass at the Batticaloa St. Mary’s Cathedral, in the Eastern Province of Sri Lanka. Eight other people, including his wife, were injured during the firing.

Yesterday, the Batticaloa High Court acquitted and ordered the released of all five accused, including former-LTTE cadre and now-Member of Parliament, Sivanesathurai Chandrakanthan alias ‘Pillaiyaan’, in the trial  of Pararajasingham, a former Tamil National Alliance Parliamentarian. The judgment was delivered after the Attorney General’s Department (AG) informed the Court that it would not proceed with the prosecution.  The AG provided no reason publicly for this decision.

“The shelving of this case five years after it began, is a blow to the victims of this serious human rights atrocity.” said Ian Seiderman, ICJ’s Legal and Policy Director.

“This constitutes yet another marker of Sri Lanka’s consistent failure to hold accountable perpetrators of serious conflict-era crimes,” he added.

In November 2020, the AG had informed the Batticaloa High Court that he intended to proceed with the case, notwithstanding the Court of Appeal deemed inadmissible important evidence of the prosecution’s case.

The UN Office of the High Commissioner on Human Rights Investigation on Sri Lanka (2015) had already concluded that “there are reasonable grounds to believe that the Karuna Group (of which Chandrakanthan was a member) killed Joseph Pararajasingham, and that it was aided and abetted by security and army personnel.”

The acquittal in Pararajasingham’s murder case follows that of another Tamil Parliamentarian Nadarajah Raviraj, where an all-Sinhalese jury acquitted five persons including three Navy intelligence officers in December 2016, a decade after his murder.

The UN High Commissioner for Human Rights identified both these cases, in which no progress had been made, emblematic of Sri Lanka’s dismal record on accountability.

The ICJ called on the Attorney General’s Department to reopen fresh investigations into the murder of the deceased legislator so as to ensure justice and justice for the victims of this atrocity.

The ICJ notes that the Attorney General maintains the dual role of  public prosecutor and as attorney for the State, positions which are prone to come into tension.  The former UN Special Rapporteur on the Independence of Judges and Lawyers, Monica Pinto, following her mission to Sri Lanka in 2016 observed that “there is a general perception that, first and foremost, the [Attorney General’s] department defends the interests of the government and not the public’s interest.”

Sivanesathurai Chandrakanthan who broke away from the Liberation Tigers of Tamil Eelam (LTTE) in 2004, functioned as a paramilitary, in support of the then-Rajapaksa Government. He is presently the leader of Tamil Makkal Viduthalai Pulikal (TMVP), a political party aligned to the Government and was voted into Parliament at the 2020 General Elections.

Investigation into the killing only began in 2015, after a new government was formed following elections which saw the defeat of Rajapaksa. Chandrakanthan was taken into remand custody on 11 October 2015 when he arrived at the Criminal Investigation Department to record a statement in relation to the assassination of the late Tamil politician. The Attorney General indicted that Chandrakanthan (who was 3rd accused) in the High Court of Batticaloa for offences committed under the Penal Code and the Prevention of Terrorism Act. He was granted bail for the first time in November 2020 after the primary evidence against the accused was deemed inadmissible by the Court of Appeal. The case was fixed for January 11 only after the AG informed courts he intended proceeding with the case notwithstanding the Appeal Court ruling.