Sri Lanka: 3353 activists have been arrested and 1255 still remain in remand custody under the flimsiest of charges 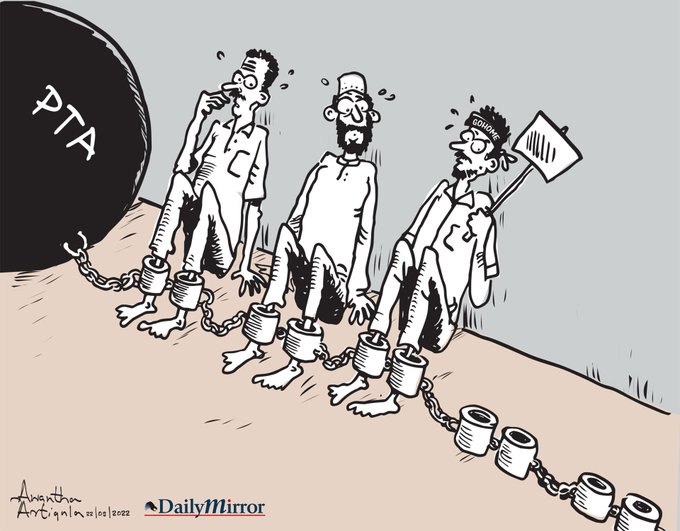 In forwarding a tweet by UN Special Rapporteur Mary Lawlor , senior journalist Ranga Jayasuriya says that Ranil Wickremasinghe has unleashed a full-blown witch-hunt against the protesters: So far, 3353 activists have been arrested and 1255 still remain in remand custody under the flimsiest of charges. 31 activists were arrested Yesterday ( 21st), 6 were remanded.

#SriLanka @RW_UNP has unleashed a full-blown witch-hunt against the protesters: So far, 3353 activists have been arrested and 1255 still remain in remand custody under the flimsiest of charges.
31 activists were arrested Yesterday ( 21st), 6 were remanded. @MaryLawlorhrds https://t.co/tuiB5n0Crn

In an article captioned “SL faces global censure over detentions under PTA” Maneshka Borham of Daily FT has given a detailed view of international concerns on Ranil Wickremasinghe using PTA to detain activists.

The Sri Lankan Government is facing a severe international backlash after the detention of Inter- University Students Convenor Wasantha Mudalige and two others under the draconian Prevention of Terrorism Act (PTA) despite the Government repeated assurances of reform.

Releasing a statement, international rights advocacy organisation Amnesty International South Asia Director Yamini Mishra said using a draconian anti-terror law to crackdown on protesters is a new low for the Sri Lankan Government. According to her, the Government is weaponising an already highly-criticised law, which should be repealed immediately.

“This is a testament to how the authorities are unwilling to withstand any form of criticism and are systematically stifling dissenting voices. This is against Sri Lanka’s international human rights obligations, especially the rights to freedom of expression and peaceful assembly,” she said.

UN Special Rapporteur on Human Rights Defenders Mary Lawlor also expressed her concern about the arrests and urged President Ranil Wickremesinghe to not to sign their detention order requested by the Police. However, Wickremesinghe has since granted the approval to detain the trio for another 90 days for questioning.

Issuing a statement after President Ranil Wickremesinghe’s decision to allow for the detention of the student activists, US Ambassador to Sri Lanka Julie Chung said using laws that don’t conform with international human rights standards like the PTA erodes democracy in Sri Lanka. “We encourage the Government to uphold the rights of the people to express their views,” she added.

Also issuing a statement, the European Union said about it is concerned about the reports on the use of the Prevention of Terrorism Act in recent arrests in reference to information given by the Government of Sri Lanka to the International Community about the de-facto moratorium of the use of the PTA.

Canadian High Commissioner to Sri Lanka David Mackinnon said: “We encourage authorities in Sri Lanka to reconsider the decision to use the Prevention of Terrorism Act given the PTA is widely seen as inconsistent with democratic norms and respect for human rights.”

The International Commission of Jurists also slammed the move saying it condemns the use of the draconian PTA for the targeted arrests of several peaceful protestors and called on the Government to adhere to international human rights standards and immediately impose a moratorium on use of PTA and refrain from targeting peaceful protesters.

The Police are accusing Mudalige and others of possibly conspiring against the State. Police Spokesman SSP Nihla Talduwa has said they were detained in order to be questioned about the violent incidents that took place across the country following the 31 March protest near the private residence of former President Gotabaya Rajapaksa in Mirihana.