SRI LANKA: 15th of December; a day to remember; BASL calls for reconsider Impeachment, guarantee natural justice and will not welcome a New CJ 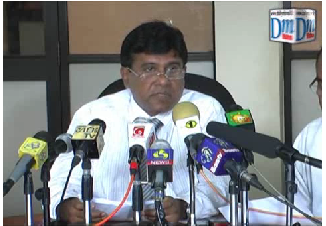 Basil Fernando
The Bar Association of Sri Lanka passed a historical resolution today opposing the impeachment motion and avowing that, if the incumbent CJ is removed, the Bar Association will not welcome anyone who is appointed in her place. The following is a summary of the resolution given by the Lawyer’s Collective.
“The President of BASL formulated the resolution based on the two sets of resolutions that have been received. He presented it to the House. In summary the resolutions had three items:
(a) President to reconsider the impeachment, in the light of his recent statement on the report.
(b) If the parliament proceeds with it, then to enact a procedural law, guaranteeing Rules of Natural Justice
(c) If the CJ is removed without following Rule of Law and Natural justice, then the Bar would not welcome the new appointee”

The Bar Association meeting was a response to a letter written by Mr. SL Gunasekara, a senior lawyer, who wrote,

It was also reported that about 3000 lawyers attended the general meeting. This is the largest reported number that have ever attended such a meeting of the Bar Association. The lawyers came from all parts of the country. The response of the lawyers on this occasion is a welcome change to many years of apathy and inaction. However, as the members of the bar have begun to grasp the gravity of the situation, they have moved to respond.

Earlier this week, the Judicial Services Association also, in a clearly worded statement, expressed their opposition to the Parliamentary Select Committee “trial” and urged the President not to take any actions on the basis of the recommendations of the PSC. They further explained that the removal of a judge should only be done by following the internationally accepted norms and standards.

Thus, the lawyers and the judges of Sri Lanka have spoken, and they have let the President and the country know that the impeachment process as it stands now is unacceptable and illegal, and that they would oppose it.

With these expressions of clear opposition in unambiguous terms, one of the most vicious aspects of the 1978 Constitution has now been challenged. This constitution was passed with the clear intention of displacing democracy and the rule of law, and to give the Executive President absolute power. An early application made by the President to the Supreme Court through a Solicitor General clearly expressed his wish to have the same status as that of a monarch. The Supreme Court, even in the early years after the passing of the 1978 Constitution, rejected this view.

However, from the passing of the 1978 Constitution up to now has been a long period, during which the independence of the judiciary has been severely undermined, and the system of rule of law and due process, well established back then, have seen alarming setbacks during this period.

However, what was in favour of President Jayewardene were the long years of internal conflict, which finally blew up into a civil war. As a result of this internal conflict, the entire society was silenced on all other matters. One of the results was that the reaction against the authoritarian move on the part of the Executive President went unchallenged. There was even an idea that, during a time of internal conflict, an authoritarian leader may be a better alternative. Ideological developments during this period and the way they were manipulated have already been exposed by many and much written material exists on that issue. What is important to note is that there was a silencing of the society during that period, and the emergency regulations, the anti-terrorism laws and the intense violence that existed at the time prevented strong opposition to the undermining of the rule of law and democracy.

The move by the present government to remove the Chief Justice herself in an arbitrary and very rude fashion has created a backlash and perhaps the most important constitutional crisis that has taken place in Sri Lanka since the promulgation of the 1978 Constitution.

The lawyers, the judges and the civil society in general are beginning to reckon with the danger that the society is faced with under the Executive Presidential system. The opposition that the lawyers, judges and civil society have demonstrated against the impeachment move by the government is only a manifestation of a much larger protest and even anger that exists in the country today against the political development that tends towards the establishment of the hegemony of security forces taking the place of the institutions of the rule of law.

In these circumstances, these protests, if they achieve their ultimate aim, should be directed towards then ending of the Executive Presidential system and bringing about significant constitutional changes to re-establish democracy and rule of law. We hope that the firm determination shown on the 15th of December 2012 will be the beginning of a serious reckoning on the part of the society as a whole against the threats forced against it.