Congress of Religions on Impeachment of the Chief Justice:we have to abide by norms of governance and the requirements of natural justice and human rights accepted by the community of nations 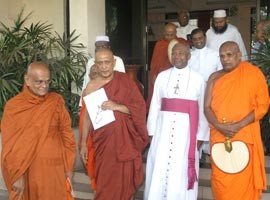 At the outset, we endorse wholeheartedly the appeal of the four Mahanayake Theros to the President to set aside the impeachment motion brought against the Chief Justice.

It is a matter of grave concern to the people of the country that the Government through the accusations levelled against Chief Justice seem to have convinced itself that the Chief Justice has not lived up to the standards of personal integrity expected of her.

Since this is a very serious matter, the Government has the equally grave responsibility to ensure that adequate evidence is provided to prove these charges and at the same time follow scrupulously the procedures stipulated in the Constitution for this kind of action. Until proven fully, no party in a case stands convicted of a charge.

It seems to us that on both counts there are serious deficiencies. Regarding the first, the Government appears to have been motivated more by a series of decisions of the Supreme Court in recent times, which went contrary to its expectations, than by a prima facie case for impeachment. If that be the case, the independence of the Judiciary, which is a cornerstone of a democratic polity and the last bastion of Justice for the people, will be in grave jeopardy.

Regarding the second, the speed with which the Government has proceeded up to now to impeach the Chief Justice, gives rise to a justifiable suspicion about the motivation of the Govt. in this matter. The fact that she has not been given adequate time to respond and prepare her defence, time usually allocated even to ordinary litigants in regular court cases, is unfair. Is that due to political consideration?

Even more worrying is the rejection by the Government of the recommendation of the Supreme Court to postpone the commencement of impeachment proceedings, until it has made up its mind on the Constitutional competence of a Parliamentary Select Committee to make a judgment on the charges against the Chief Justice.

We appreciate the conciliatory gesture of the Supreme Court in order to avoid a direct confrontation with the Legislature. But unfortunately the Government has refused to accept that gesture and gone ahead. This naturally gives rise to the suspicion that the Government is not neutral with regard to the outcome of the case, but is patently seeking a judgment in its favour, somehow or other.

This step denies the fundamental principle of the separation of powers between the Legislature, the Executive, and the Judiciary. While we accept the principle that the legislative authority resides with the Parliament, the independence of the Judiciary to correctly apply the laws, without interference or hindrance, becomes important.

In a globalised world in which countries are coming to be more and more connected, no country can ignore the impact of its standing vis-à-vis the world. While we accept the freedom of a sovereign state to manage its own affairs, we also have to realise that we have to abide by norms of governance and the requirements of natural justice and human rights accepted by the community of nations. If we disregard them with impunity, the consequences can be serious.

Already Sri Lanka has come under the spotlight of the international community with regard to its record on human rights in the context of the 30-year war. This would be thus an adding of fuel to the fire.

Finally, we cannot help thinking that this move to impeach the Chief Justice is another instance of the breakdown of law and order in the country. We publicly profess adherence to religious values, of all four major religions, and as such believe we should always work for a dharmista society. In addition to the social and moral evils pervading our society today, the apparent assault on the freedom of the Judiciary would only add to the contradiction of that belief in real life.

If for no other reason, the moral-religious imperatives of millennia of historical evolution, driven in the main by the Buddhist ethos, should compel us to render justice to the Chief Justice, and thereby do justice to ourselves as a civilised nation. Otherwise, the country and its people will be the final losers. We call upon the Government to do just that.

We intend sharing the content of this letter with the media as well.