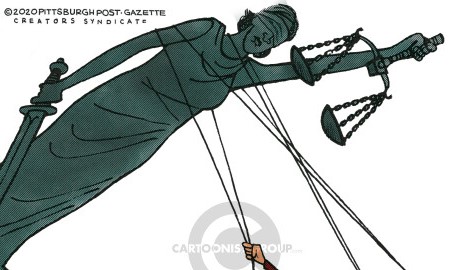 Calling a civil conflict or a civil war, a war itself, is very misleading. Wars are fought with external enemies. However, civil conflict or a civil war is a fight that takes place among the brethren, with the people who should in fact be living together as a nation. What the ties of blood means within a family is politically and socially speaking what exists among everyone who belongs to a nation.

Civil war is a tragedy that destroys the very foundation of a society and of a nation. The primary responsibility of all concerned is to avoid a situation that could lead to bloodletting between those who, whether they like it or not, are part of the same body called the nation. While avoiding such a situation is a primary responsibility of all, the greater burden falls on the hands of those who are running the State. The primary purpose of a State is to create the necessary condition for everyone, despite their various differences, to live together within a framework of mutual trust leading to mutual benefits.

Thus, when we talk about winning a “war” we are in fact talking about a failure that has profound implications. At the end of such an unfortunate situation, the most elementary common sense obligation for everyone and particularly the State is to ask where we failed. The only meaningful question that could lead to a positive result for the present and the future is about the causes of the failure that created the civil war.

It is easy to engage in blame games. However, such blame games are childish and foolish. They belittle the gravity of what is meant by a civil war and trivialize the heavy cost in terms of lives and material losses that individuals as well as the whole of society suffered as a consequence.

Claims of triumphalism are a manifestation of a degenerate moral sentiment. It is said that the defining quality of civilization is the capacity for empathy. If even a tragic situation such as a civil war does not evoke feelings of empathy for those who have suffered and who continue to suffer, the result is a dead nation – dead psychologically, dead socially, dead emotionally and dead institutionally. Nothing has been won. The truth is that we continue to lose.

To be continuing to lose and not being able to recognize this continuing loss creates further distancing among people, paralyzing of all forms of creativity within the society and the nation. This is happening in Sri Lanka not only in terms of a particular group of persons against whom “the war” was directed but also to everyone in the society.

Every major crisis that exists can be traced to some extent to the civil wars that happened in the South, the North and the East from 1971 to 2009. Sri Lanka during this time became a place of great instability and ever increasing poverty.

All these conflicts have contributed to Sri Lanka becoming one of the most indebted nations in the world where debt payments exceed the annual income. This indebtedness is a product of having to make extreme expenditures for the war. And that is going to continue for a long time. So long as the economic crisis deepens, there will be more internal conflicts of all sorts. As the poverty increases, the discontent of all sectors of society will grow and with that, there will be more conflicts.

The kind of State structure we have has no other solution to conflict other than to resort to harsher security measures to repress the people. Social control by extreme forms of repression will become a permanent part of life until and unless the causes that made Sri Lanka incapable of settling its disputes through internal discourse and conversation are rectified.

Already there are manifestations of the abuse of the powers to use administrative detentions in order to suppress every kind of dissent. As we know from past experiences, the abuse of the detention processes under the pretext of national security has been the major cause of dictatorship that we have known in history.

When more and more repression is needed, there is something that the authorities will find necessary to displace, and that is the law. The law in its normal sense begins to disappear and is replaced with what would normally be considered illegal and even criminal. Administrative detention itself is such a measure. However, judging from the past few decades, it could go much further.

It was not long ago that the disposal of dead bodies without following the normal legal procedures such as the provision for post mortems in the case of suspicious deaths were allowed. That was nothing more than the legalization of murder. Such highly planned systems of murder achieved through gazette notifications could happen at any time under these circumstances.

In order to displace the law and to make the abuse of power legalized, it is necessary to weaken the judiciary as much as possible. If the judiciary remains strong, then the people will resort to the courts when they are threatened. When the courts are weakened, people have nowhere to go to and therefore are in a helpless situation. And such a situation is created by design.

One of the most important aspects of a civilized social life is a well functioning criminal justice system. One of the major results of “the war” was the destruction of Sri Lanka’s criminal justice system to a very great extent. Successive Governments have admitted that the police were used during the conflict times for military purposes. That meant that the police function was defeated.

With large scale deaths that have never been investigated, the criminal investigation function suffered a great decline from which it would find it most difficult to rise again. However, after the conflict periods, instead of trying to restore the criminal justice system, it has been greatly undermined by interferences into the investigative mechanism, the prosecutorial mechanism and the adjudication systems.

It has gone to the extent of a Government appointed commission calling for the withdrawal of indictments filed according to the law and to punish those who investigated those crimes and even those who prosecuted them. A culture of extreme fear has been spread throughout the entirety of the system of the administration of justice.

Unable to control even the prisons in a decent manner, the use of inhumane treatment and torture has become part of the way the prisons are run as pointed out in a report published by the Human Rights Commission.

The conditions created by the war continue and are aggravated each day. The system that allowed an internal conflict to degenerate into a civil war is still the supreme law of Sri Lanka, and that is the 1978 Constitution.

While Sri Lanka’s situation cannot be compared to that of Germany in the Second World War because Sri Lanka has not been engaging either in a civil war or any external war, nor have we done crimes against humanity to the extent of the extermination of Jews and other such evils, in one respect Sri Lanka and its constitutional situation is the same as was created by Hitler for his advantage. He took all the power into his hands. Everyone had simply to obey. No independent institutions were allowed to function in any way. That situation is similar to the situation created through the 1978 Constitution and it has become worse.

Thus the 12th anniversary of the end of the war is a moment at which we cannot say the same thing as Abraham Lincoln did at the end of the American civil war in his Gettysburg address:

“That this nation, under God, shall have a new birth of freedom, and that government of the people, by the people, for the people, shall not perish from the earth.”