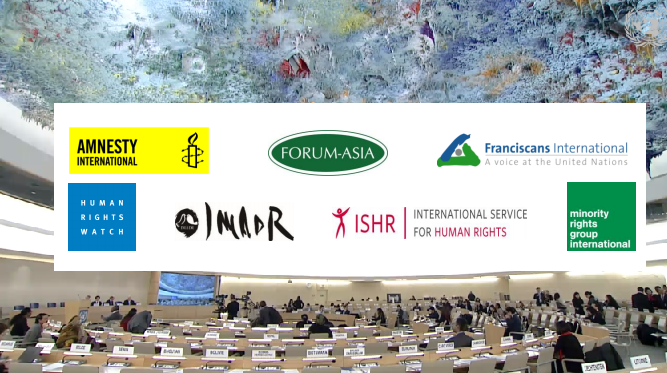 “Considering growing concerns over shrinking space for dissent domestically, the Council remains effectively the only forum where Sri Lankan civil society has the possibility to engage openly in dialogue with the Government and other States on human rights concerns in Sri Lanka and the Human Rights Council needs to take a more robust approach on Sri Lanka” says the joint oral statement dilivered at the ongoing HRC44 by international human rights organisations.

Joint Oral Statement 44th session of the Human Rights Council,
Item 3: Interactive dialogue with the Special Rapporteur on the rights to freedom of peaceful assembly and of association /10 July 2020.

Thank you, Madam President.
As the Special Rapporteur’s report demonstrates, the space for Sri Lankan civil society is rapidly shrinking. For several months now, civil society organisations have been subject to intensified military surveillance and questioning by different government authorities.

Worryingly, the COVID-19 pandemic has been exploited by the Sri Lankan government to impose restrictions on the rights to freedom of expression, association and peaceful assembly, resulting in the arrest and detention of social media commentators like Ramzy Razeek. Senior lawyer and minority and civic rights activist, Hejaaz Hizbullah, who was arrested and detained on suspicion of offences under the draconian Prevention of Terrorism Act, has now been detained for close to three months without being produced before a judge, after having been misled to believe that the authorities were visiting his house to discuss his potential exposure to COVID-19.

Since January 2020, the Government of Sri Lanka has established multiple Presidential Task Forces.

Decisions have been taken with no oversight by Parliament. The Presidential Task Force to build a “Secure Country, Disciplined, Virtuous and Lawful Society” is fully comprised of security sector personnel and given an ambiguous mandate. Sri Lankan civil society has raised a serious concern that the task force can extend military control over civilian life.

Its power can be abused to curtail dissenting voices which are deemed to be “harmful to the free and peaceful existence of society”. The increased deployment of military personal along with the police, and the disproportionate use of force against peaceful protesters, as observed recently, are also alarming.

Considering growing concerns over shrinking space for dissent domestically, the Council remains effectively the only forum where Sri Lankan civil society has the possibility to engage openly in dialogue with the Government and other States on human rights concerns in Sri Lanka, and even this space is increasingly under threat due to deepening risks of reprisals against Sri Lankan civil society actors who speak at the Council. Those human right defenders are increasingly vilified as “traitors” in both mainstream and social media Given Sri Lanka’s announced withdrawal from its commitments to the implementation of resolution 30/1, and the clear and consistent recommendations by the OHCHR that the Council should monitor progress towards accountability, the Council needs to take a more robust approach on Sri Lanka. Against this backdrop, we encourage the Special Rapporteur to continue to follow up on the situation and urge the Human Rights Council to enhance its monitoring of Sri Lanka’s compliance with international human rights law, including to ensure that human rights are protected throughout the forthcoming general elections.