South African initiative in cold storage; Experts too may fail 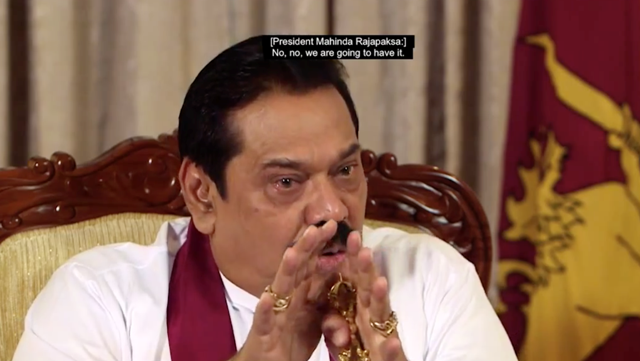 [When questioned Rajapaksa siad that we will have a TRC; photo:Internet]
By Jehan Perera
The government is financing more lobbying companies in the US to change the minds of the US leadership. It has been the United States that has been most strongly pushing for an international investigation into the conduct of the last phase of the war. But it is not going to be so easy as influencing the President of the United States through lobbying companies. For the government’s efforts to be successful it has to show progress in two areas that convinces the international community. First, it has to come up with a superior alternative to the UN investigation that is now underway. Second, it has to show that it is serious about practices of good governance that will support such an alternative mechanism. However, the government is having setbacks in both areas which is not a recipe for success, but is one for failure.

The government’s bid to strengthen the national commission appointed by the President to investigate missing persons has induced it to widen the mandate of that body very significantly. As a result the priorities of the commission as having to shift away from dealing with the issue of missing persons to other complex issues of international humanitarian law and war crimes that were not part of its original mandate. The Chairman of the Commission on Missing Persons has made it clear that the Commission itself did not ask for the international advisors to the commission who have been appointed. In fact they have yet to meet formally, even though a month has elapsed since the first three members of the international advisory team were appointed.

In addition, the decision to expand the international advisory group is likely to lead to a dilution of its effectiveness. While the initial three appointments were acknowledged to be international experts in the field of war related offenses, the subsequent appointments appear to be more ad hoc.

The international advisor appointed from India is not a high profile figure who has dealt with issues arising out of wars, but a person whose main involvement has been in rural litigation. The initial challenge is for the government to be able to show its detractors that it is serious about tackling the problems of human rights and accountability that accompanied the war, and that the strengthened mandate of the Commission on Missing Persons and the international advisors will be equal to the task. So far there has been no acceptance of it by the opposition, let alone the international community.

ELECTORAL STAKES
The decision of senior members of the UNP and TNA to testify at the Investigation into war crimes launched by the UN Human Rights Commissioner, despite the government’s empowerment of its own Missing Persons Commission, is an indication of the polarized nature of Sri Lankan politics. Unfortunately, the government’s inability and unwillingness to work with the opposition in solving the problem has exacerbated the problem for the government. The polarization within the polity can be attributed at least partly to the exigencies of electoral politics. Elections to the Uva Province are scheduled to be held next month, and are widely believed to set the stage for the vitally important Presidential and General Elections to follow.

The problem is that sections within the government see its survival in terms of increasing, rather than decreasing, the polarization in society. The results of this strategy have been seen in the voting patterns after the end of the war. Those areas where the Muslim and Tamil people live in have a different pattern of voting as compared to the areas where the Sinhalese people live. In recent months the failure to stop anti- Muslim activities and the apparent deference to Buddhist groups that attack the Muslim community have caused a further polarization in society. But to the extent that this polarization sustains the government’s majority vote bank, it appears to have considered that the existence of polarization within the country is a price that is worth paying.

The government has repeatedly stated that it will not cooperate with the UN investigation as it is detrimental to the country’s sovereignty. However, the opposition is doing the opposite of what the government has required of Sri Lankans. There was speculation that the government might even make it a legal offense for any Sri Lankan to go and testify before the investigation team. It is likely that such an action would be supported by many of Sri Lanka’s people as they agree strongly with the government that defeating the LTTE was the highest good, and any cost that was borne was worth it. Therefore, the government’s hardline strategy with regard to the international community is more likely to bring it electoral dividends than the opposition’s strategy of looking to the international community for solutions.

FURTHER POLARISATION
However, there is also a further cause for the polarization within the polity which has nothing to do with the issue of whether or not Sri Lankans and political parties will cooperate with the international investigation. This is the government’s continuing practice of deciding on important national issues by itself. The issue of war crimes provides a striking example. The government’s decision to invite international advisors into Sri Lanka to advise the Commission on Missing Persons was not taken after a transparent decision making process. That decision was taken unilaterally and in a non-transparent manner with even most of the cabinet of ministers being taken by surprise. In this context it is going to be difficult to expect the cooperation of the opposition in addressing important national issues.

SA initiative in cold storage
Prior to the President’s surprise decision to appoint the international advisory panel to the Missing Persons Commission, there was considerable interest in the South African model of dealing with the past. At the present time, the South African initiative seems to have been put into cold storage. But it is an offer worth considering very seriously. The role of South Africa would be to ensure that the highest standards of transparency and that there will be fair play to all sides in an inclusive process, and not only targeting the government. Such a partnership with South Africa in pursuing the path of truth and reconciliation can go a considerable part of the way to win over many to support a nationally driven process of truth and reconciliation but which has international involvement.

The South African example of reconciliation is today entrenched in the consciousness of the international community as a success story. At the present time it seems that a properly constituted and mandated Truth and Reconciliation mechanism with South African support is the best option to transform Sri Lanka’s internal and external relationships in a positive direction. It requires the participation of all key sectors, including the opposition. By way of contrast, the international advisory group appointed by the President without consultation with other key sectors has not won the acceptance of key groups on the ground whose support would be necessary to make the process a credible one. The Bishop of Mannar, Rayappu Joseph, who is an important civil society and religious leader representing the North, has rejected the Commission on Missing Person.

The Bishop has written to its Chairman that “I have decided not to make representations before your commission. I have over the years grown to be weary of domestic mechanisms in resolving serious injustices that Tamil people have faced over the period of the war, prior to it and after its conclusion. Over the years many commissions such as yours have been set up and there is absolutely no shred of evidence that they have tackled impunity. Most, if not all of these commissions have provided only to be eye washers for the then Governments in power.”