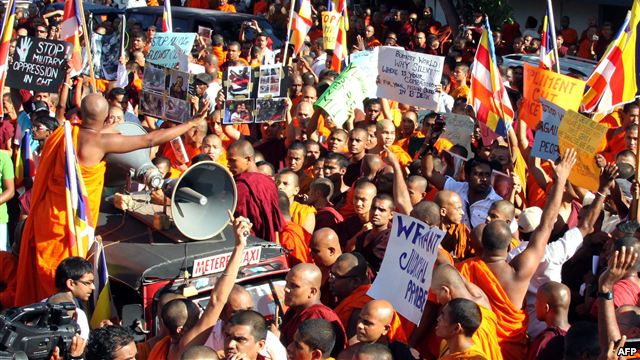 The Sri Lanka Muslim Congress has, in a resolution unanimously adopted on Saturday, noted ‘with grave concern the intensity and widespread religious intolerance’ and ‘attempts to stall progress in devolution by weakening or abolishing the provincial council system’.
The following is the full text of the Resolutions unanimously adopted at the 24th Delegates’ Conference of the SLMC:

Whereas, the founding objectives of the Sri Lanka Muslim Congress include to ensure that Sri Lanka is pluralistic, undivided and united within which all communities could live equally with due participation in decision making and due access to state power through satisfactory sharing of power through devolution.

And whereas the SLMC notes with grave concern the intensity and widespread religious intolerance that are being unleashed and spread unchecked, the attempts to stall progress in devolution, the attempts by different elements to scuttle and abrogate the existing devolution by weakening the provincial council system and also to even abolish the provincial council system and the lack of focus in resettling those in protracted displacement.

Therefore we the Delegates of the SLMC resolve as a matter of priority the SLMC concentrates on the following:

1. That the SLMC shall take every possible step to influence and prevail upon the government to address immediately the issue of religious intolerance and propagation of hate-speech and to ensure that all religions and places of worships are protected and every religious practice and customs are safeguarded and permitted to the satisfaction to the followers of each religion.

2. That it is most appropriate that this 24th Delegates’ Conference reiterates our commitment to ensure “power-sharing” as a means of achieving shared rule and dignified coexistence of all citizens and communities including those numerically smaller communities.

3. That the SLMC shall use its influence to further the devolution to the Provincial Councils and shall oppose any attempt to weaken and/or sabotage the existing provincial council system, and/or to establish any alternate and concurrent structures that could exercise the powers of the existing Provincial Councils and/or also any attempt to abolish the provincial council system without setting up an alternative mechanism through which state power could be devolved and shared as acceptable to all communities.

4. That we the Delegates of the SLMC shall oppose any move which will undermine the devolution process and shall firmly stand for a meaningful devolution to safeguard and ensure equal rights to all communities inhabiting Sri Lanka.

5. That it is further resolved that the SLMC shall henceforth oppose enactment of any legislation that is considered and/or aimed at eroding the powers of the existing Provincial Councils and shall strive to further enhance and strengthen the existing mechanism to make devolution meaningful.

6. That this conference notes with deep sense of regret that despite 43 long months have passed since the end of the war the displaced persons due to the war both recently displaced as well as those in protracted displacement have not been duly resettled with satisfactory reparation. This is particularly significant in relation to the ethnically cleansed Muslims from the Northern Province in 1990 and therefore we the Delegates of the SLMC resolve that the SLMC urges and ensures that the government takes immediate and concrete steps in formulating and implementing a National Policy for Resettlement of the Internally Displaced Persons and Refugees as well as ensuring that conducive environment is established to facilitate the voluntary return of the Northern Muslims and to provide and protect economic, social and cultural rights.

7. That the SLMC shall persuade and influence the government to implement in full the recommendations of the LLRC immediately to address the issues dealt therein.

8. That this conference reiterates its commitment to extend solidarity to the struggle of the people of Palestine for self-determination and Statehood and calls on the government of Sri Lanka to strengthen its relationship with Palestine and to engage constructively in the efforts to dismantle the structures of Israeli occupation in Gaza and work towards the achievement of durable solutions that would satisfy the aspirations of the people of Palestine
IS