SLB- UPR papers No 05/2017:Violation of human rights by the Police 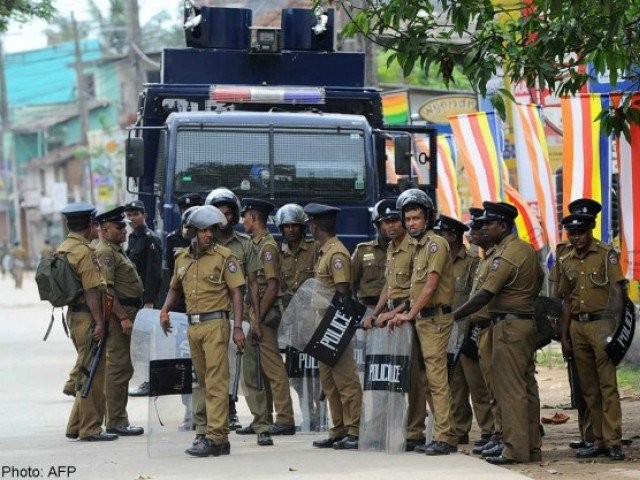 Violation of human rights by the Police

Sri Lanka’s independent National Police Commission (NPC) does not have power to discipline & control the police force. Although the NPC has requested to make structural changes to give it the independence and control which it presently lacks, no positive action has been taken by the government[1].  NPC web site does not provide information in all three languages[2] and is not even updated[3].

An increasing number of cases of illegal arrests, torturing suspects, shooting at suspects accused of general offences, covering up their wrong doings by the police are being reported.

Evidence of police chief being abusive

Inspector General of Police Mr. Pujitha Jayasundara has used physical violence against civilian employees and the incident has been recorded by CCTV. No action has been taken by the government against this abusive behaviour.

Mr. Jayalath Kandambige Chaminda (39), a resident of Meegahajandura, Bandagiriya in Hambantota District in Sri Lanka, had been extra-judicially killed on April 27,  2017, by officers attached to the Central Anti-Vice Unit of Walana, Panadura and Police Special Task Force (STF).

Mr. A D Pushpakumara was arrested on June 18, 2017 by police officers attached to the Pitigala Police Station following a domestic violence complaint made by his wife. He was publicly tortured at the time of his arrest, witnessed by numerous onlookers. His body was found the next morning floating in the Oluvila Canal

Mr. D P Premasiri (65) of Grandpass, Colombo 14 in Colombo District, was illegally arrested and severely tortured at his house in front of his relatives and neighbours on August 09, 2017. Later, he was handcuffed and pushed against a parapet wall causing him to fall over on the ground and was fatally injured. He was brought to the National Hospital of Sri Lanka by relatives and pronounced dead on admission.

Mr. Chadik Shyaman Wickramarachchi (42), a resident of Rakgahawatte, Biyagama in Gampaha District, was extra-judicially killed on February 25, 2017, by officers of the Paliyagoda Police Station. No investigation was carried out over the matter denying justice for the victim and his family.

Mr. Magoda Pathirage Hemavipul (42), was extra-judicially killed on September 19, 2017, by Officers attached to the Pitigala Police Station. The victim was arrested the previous day and detained in a cell overnight. In the early hours of the 19th his dead body was found lying in the cell.

Mr. Naiwala Appuhamilage Gamini Edwad (50) resident of Divulapitiya Police Division, was illegally arrested by Crime Branch Officers of the Police Station on October 02, 2017. Later, during his interrogation, he was tortured in to admitting that he committed theft.  He was produced before the Magistrate on the next day and remanded. Later admitted to Negombo General Hospital due to his acute medical condition, on admission the victim was pronounced dead.

Pitawalagedara Chandrarathna (47), resident of Bakamuna Police Division, was arrested on May 04, 2017 and charged with participation in a murder. After being detained for 14 days, he was found dead on September 18, 2017–murdered inside the Polonnaruwa Remand Prison.

Mr. Jayalath Pedige Udaya Samantha Sooriyakumara (31), resident of Warakapola Police Division in Kegalle District, was shot by a team of Police Officers while he was walking with his mother on August 15, 2017. He was immediately brought and admitted to the Wathupitiwala Base Hospital for assessment and urgent medical care. Later, Police issued a communique stating that the victim was innocent.

Mr. Sathasivam Madisam (17) of Karadiyanaru in Batticaloa District was swimming with his friends at Mundeniyaru Lagoon on July 24, 2017 when numerous Police Officers attached to the Maduru Oya Camp Special Task Force arrived, fully equipped with weapons. Seeing the officers with weapons the boys were in fear of their lives and started running. The officers fired in the air and ran after the boys. Sathasivam fell into the water and was drowning. Though his brother and went to his rescue, the Police did not allow him to be pulled out. His body was later brought out of the water by the officers themselves.

[4] All these incidents have been reported by the Asian Human Rights Commission, an NGO based in Hong Kong @ http://www.humanrights.asia/