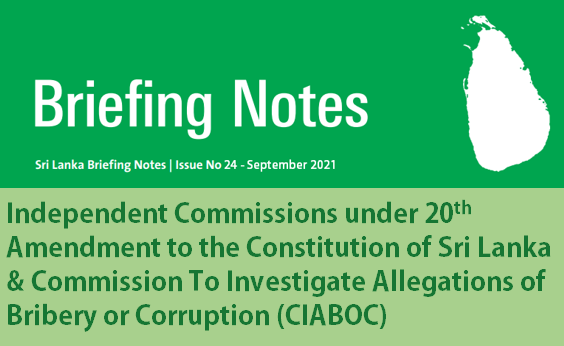 20th Amendment to the constitution of Sri Lanka expanded the executive powers of the president allowing him to appoint his nominees to the Independent Commissions. Under the now defunct 19th Amendment appointments were decided by the Constitutional Council. 20th A. abolished the Constitutional Council and established the Parliamentary Committee which can only make observations of the president’s nominations. In this fact sheet SLB provides professional and political details of the persons appointed by president Gotabhaya Rajapaksa to some of those commissions.

Commission To Investigate Allegations of Bribery or Corruption (CIABOC)

The Commission[1] shall consist of three members, two of whom shall be retired Judges of the Supreme Court or of the Court of Appeal and one of whom shall be a person with wide experience relating to the investigation of crime and law enforcement.

In an interview with Sinhala language daily “Deshaya” (July 06, 2014)   the SC judge Eva Wansundara set out her extra ordinary friendship with then President Mahinda Rajapaksa.[2] “The former judge Eva Wansundara had conceded [3] that Mahinda Rajapaksa is a close friend and that he had asked him to drop by at Temple Trees while returning home after completing work at the Attorney General’s Department. When she visited Temple Trees she was appointed as a Supreme Court judge. This was the level of friendship she had described during the interview.

In March 2008 as a High Court judge she convicted[4] journalist JS Tissanayagam, who wrote articles criticising the Sri Lankan government’s war against the Tamil Tigers was sentenced to 20 years’ hard labour under the country’s anti-terrorism laws. Wijesundera was one of the High Court Judge who ruled on the White-Flag trial that convicted former Army Chief Sarath Fonseka to 3 years of rigorous imprisonment in 2010. The decision was 2 to 1.

Wijesundera’s long term affiliations with Mahinda Rajapaksa and his family are well known[5], with the former President reportedly having signed as a witness in her daughter’s wedding and allegedly  gifting the judge’s daughter a car as a wedding gift.

Chandra Nimal Wakishta (Member) is former deputy Inspector General of the police and war time head of State Intelligence Service (SIS). When he was asked about the persons who have been detained without charges, he said that[6] “We tell them that they have done a service to the country by being in detention. It is very important for them to know that.” He was accused of misleading Interpol and British Authorities by issuing an illegal arrest warrant in 2014[7].

Withdrawing Cases on a “Technical Fault”

Under the new commissioners appointed by President Gotabaya Rajapaksa dozens of bribery and corruption cases filed earlier has been withdrawn. Number of them involves leading members of the present government.

Participating at a TV talk show Attorney-at-Law and former Member of Parliament Ajith P. Perera stated that 42 such cases have been withdrawn by CIABOC citing technical faults.   He further noted that practice of re-prosecution that has been the usual practice where technical faults occur was ignored in these cases[8].

Former Director General of the Commission and former Solicitor General Dilrukshi Dias Wickramasinghe has said that the commission had withdrawn about 45 cases filed at her time not due to lack of evidence but due to a technical issue.

The chargesheets in the above cases were withdrawn as the new administration of the Commission has recently taken a policy decision that cases cannot be filed without the full written approval of all three Commissioners.

But earlier the Commission filed the relevant charges, they were signed by only one commissioner. The Commission had then ruled that there was no legal problem with the methodology that had been in place for 21 years.

“All of those cases were filed because there is very clear evidence and  I can still prove these cases by showing evidence before a public court. Every case is filed with evidence, and I say that responsibly. She further said. Dilrukshi Dias Wickramasinghe, a former Solicitor General also stated.[9]

Commission to Investigate Allegations of Bribery or Corruption (CIABOC) has withdrawn number of high-profile cases relating to bribery and corruption. This has occurred in the context that the report of the controversial ‘Presidential Commission of Inquiry into Political Victimization during the Period Commencing 08th January 2015 and Ending 16th November 2019 tabled in Parliament in March 2021 has recommended acquittal of suspects in number of these cases.

Details of some of these high profile  cases withdrawn or failed to prove are given below.

On 22nd of January, former Director of the Sri Lanka Customs, Ranjan Kanagasabey, who was charged with soliciting a bribe of Rs 1.6 million to compile a report for the release of certain goods was acquitted. The high court judge held the opinion that there was a discrepancy in evidence and insufficient evidence to prove the charges against the accused[10].

On 25th of February, Agriculture Minister Mahindananda Aluthgamage was acquitted and released from the case that alleged he misappropriated Rs.3.9 million from a trade union affiliated to the Sri Lanka Freedom Party (SLFP). Judge held that the prosecution had failed to prove charges against the accused beyond reasonable doubt[11].

On 15th of March, the Bribery Commission informed Colombo Chief Magistrate to withdraw the charges pertaining to a case of alleged misappropriation of Rs 883 million funds by former MP Sajin de Vass Gunawardena while functioning as the CEO of Mihin Lanka, due to technical shortcomings. Accordingly, he was acquitted from the case[12].

On 15th of March, Ex-DIG Vaas Gunawardena and his wife Shayamali Priyadarshani Perera were also acquitted and released from a case filed against them with regard to illegally acquiring land. They were released as the time period to lodge such a complaint has exceeded[13].

On 18th March, the Colombo High Court ordered the release of Minister Rohitha Abeygunawardena from a corruption case for the alleged unlawful acquisition of assets estimated at Rs.41.1 million following the Bribery Commission’s decision to withdraw the indictments, on the basis that the case was filed without obtaining directions from all the directors[14].

On 30th March, former Attorney General & Former Chief Justice, Mohan Peiris and two others were acquitted and released from a case filed by the bribery commission, after the commission withdrew its allegations[15].

On 15th March the Colombo High Court concluded case proceedings against former Secretary to the President Lalith Weeratunge and former Telecommunications Regulatory Commission (TRC) Director General Anusha Palpita in connection with the controversial Sil Redi distribution case during an election, based on a previous order made by the Court of Appeal acquitting the two suspects[16]. They had been previously convicted and sentenced to three years in prison[17].

Minister Johnston Fernando, Ex-Sathosa Chairman Eraj Fernando, and Former Director of Operations at Sathosa Mohamed Shakeer were acquitted from two separate bribery cases filed against them for allegedly using 153 government workers for political activity and causing losses to the state by the Colombo magistrate court, based on a previous order issued by the Colombo High court[18].

On 21st of May, a three-judge bench of the Permanent High Court Trial-at-Bar ordered the acquittal and release of eight suspects, including Nissanka Yapa Senadhipathi, Chairman of Avant Garde, who were charged with operating a floating armory at sea. The defendants were accused of operating a floating armory onboard the MV Avant Garde near the Galle Harbor, illegal possession and transportation of 203,395 live ammunition without a license on board and causing a financial loss of 11.4 billion rupees to the Government by granting approval to the Avant Garde Maritime Services to operate a floating armory in Galle Harbor during the period from 07 August 2012 to 8 January 2015[19]. The three-judge panel ruled that the ship appeared to have a valid license to possess firearms and ammunition based on a letter issued by the defence Ministry and a statement given by the former Defence Secretary[20].

On 1st April ruling Sri Lanka Podujana Peramuna (SLPP) MP Milan Jayathilake and  former Chairman of the Dompe Pradeshiya Sabha Ajith Sisira Kumara were released from the charges filed in connection to a bribery case, after the Commission to Investigate Allegations of Bribery or Corruption had informed the Court that it will withdraw the case filed against the two suspects.[21]

Four bribery cases filed against former Development Lotteries Board Chairman Chandrawansa Pathiraja were withdrawn by the bribery commission as the commission withdrew its charges claiming that the case was filed without the approval of all three commissioners. He was accused of incurring a loss of Rs.64 million to the government in 2010 during his tenure as Development Lotteries Board Chairman by dealing with private institutions that had not signed agreements for the sale of lotteries.[22]

On 2nd July 2021, six suspects including ex-Chairman of the Sri Lanka Land Development Corporation (SLLDC), Prasad Harshan de Silva were acquitted from an alleged misappropriation of a sum of Rs 33.9 million over the construction of the D.A. Rajapaksa Memorial Museum at Medamulana in Hambantota as Attorney General withdrew the case.

Gotabaya Rajapaksha was the first accused in the trial, however he was acquitted previously using Presidential immunity in the Constitution.

On 30th of July, former Deputy Minister Sarana Gunawardena was acquitted from eight bribery cases for allegedly causing losses to the government by obtaining rented vehicles to the Development Lotteries Board (DLB) while serving as its chairperson in the year 2007. The Case was withdrawn on the basis that the written approval of all the three commissioners of the bribery commission had not been obtained when the cases were filed.