Image: Staff dig up skeletons at a site of a former war zone in Mannar, Sri Lanka ( REUTERS )

Excavators in Sri Lanka have found the skeletal remains of 21 children as well as signs of possible torture of the dead in the biggest mass grave in  the country’s former civil war zone, Mannar, putting a spotlight on the island’s recent record of human rights violations.

So far 276 skeletons have been exhumed, with forensic archaeologist Professor Raj Somadeva saying the number already makes it the “largest mass grave ever explored on the island”.

“We have excavated only 70 per cent of the gravesite, so the body count is bound to be much higher,” Professor Somadeva told The Independent.
Metal objects that appear to bind together the legs of the dead have raised new questions about what happened to the victims in the mass grave.
Who they were – and who killed them – remains uncertain. However experts agree the presence of children shows this was “certainly a [whole] community of people”.
The excavation, which started in May when a construction worker stumbled upon a human bone, is still in its early stages according to the chief investigation officer of the Mannar mass grave, Dr Saminda Rajapakse.
“We still don’t know the exact period of these deaths,” he said. “We have no idea who the victims are, their names or whether they were Tamil civilians, rebels or Sinhalese soldiers. Nothing.”
Although pottery, porcelain, metal objects and some jewellery worn by the victims have been found at the gravesite, there are no signs of clothes.
While it is too early to hold responsible either the Sri Lankan military or the Tamil Tiger rebels, who fought a bloody civil war from 1983 to 2009, human rights activists and the families of missing people are already demanding justice.
P Nagamma, a 67-year-old Tamil woman, said she believed her 18-year-old son lies buried in the Mannar mass grave. She told The Independent he was arrested by the Sri Lankan military on suspicion of being a terrorist in the early Nineties.
“He had just gone out to meet a friend and eyewitnesses told me that some unknown men took him away near the site where they found the grave,” Ms Nagamma said tearfully. “I have been waiting for him for 27 years, somehow hoping he’ll be alive somewhere. But now I think he’s lying in that grave.” 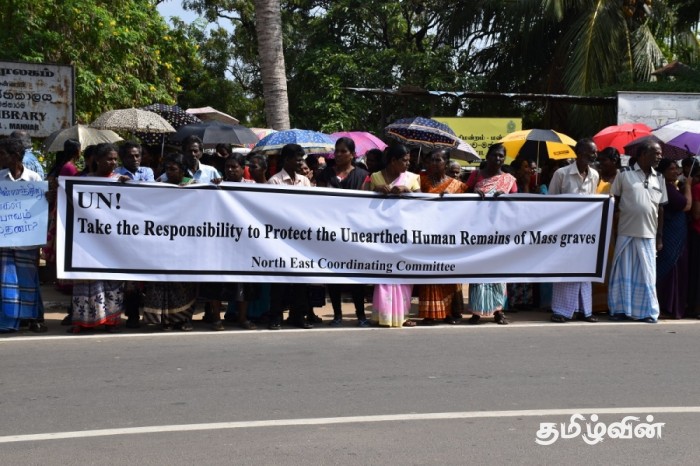 Ms Nagamma was not alone in that belief. Sandrapradasham Niranchan, a lawyer fighting for the families of the disappeared, has filed affidavits on behalf of nine families stating their husbands or sons were taken into custody by the army, navy or unknown groups in Mannar and were among the victims in the mass grave.
“Torturing and killing civilians is a blatant human rights crime. There are children in that mass grave. And we are certain there are more of these gravesites around the country where the disappeared Tamils have been buried,” he said.

The mass grave in Mannar, a Tamil-majority area, was the scene of a number of battles during the war, in which more than 100,000 people died and at least 20,000 – mostly Tamils – remain missing.

Rights groups allege both the military and the Tamil Tigers are to blame for civilian deaths and disappearances. However, former president Mahinda Rajapaksa, who faces international war crimes charges and was instrumental in ending the long drawn-out conflict, has maintained the Sri Lankan military caused not a single civilian casualty.

A spokesperson for the Sri Lankan military claimed it was not responsible for the grave. “The army is not involved in that gravesite. We had nothing to do with it,” brigadier Sumith Atapattu said.

The Tamil Tigers themselves committed many atrocities, ruthlessly executing soldiers, Tamil civilians who did not support them and sometimes their own guerrilla members. The terrorist group, which had sophisticated air, sea and land units is also accused of using civilians as human shields throughout the conflict.

“It is extremely possible that the LTTE (Tamil Tigers) could be responsible for the people in that grave,” Dr Paikiasothy Saravanamuttu, an ethnic Tamil human rights activist, told The Independent.

“But whosoever committed these atrocities has to be held responsible, because this is not just a war crime, but a crime against humanity,” he said.