Sirisena gets into political hot water as elections approach 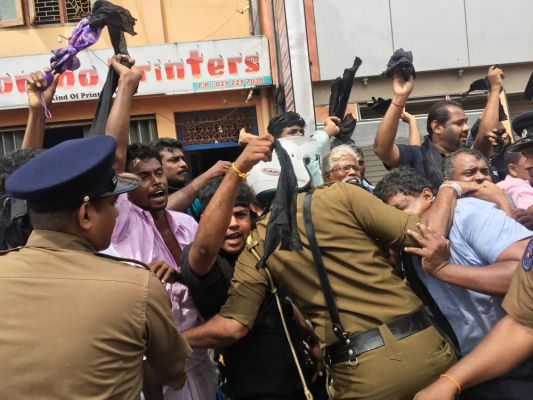 Elections to the Sri Lankan local bodies and Provincial Councils are due in 2018. But President Maithripala Sirisena and Prime Minister Ranil Wickremesinghe heading the Yahapalanaya or Good Governance regime in Colombo, not prepared for it.

The lack of preparedness is seen in the way they had been trying every trick in the book to get the elections postponed until it became politically impossible to continue to do so.

The main reason for the reluctance is the lackluster performance of the “National Unity” government which is basically an uneasy alliance between the Sri Lanka Freedom Party (SLFP) led by Sirisena and the United National Party (UNP) led by Wickremesinghe.

To give the devil its due, the Yahapalanaya government can boast of making peace with the UN, the West and India, all powerful forces which had been alienated by former President Mahinda Rajapaksa.

The government enacted the 19th. Constitutional Amendment to make it impossible for anyone to be President more than twice and had established Independent Commissions to oversee the working of key arms of the State.

But all other problems facing the war-torn developing country have remained unattended, leading to a steady erosion of popular support.

Job opportunities have not increased for the hoi polloi given the absence of adequate, large scale public and private investments. Much money has been pumped into the private construction sector, but this is a bubble which can burst given the shortage of labor due to the political reluctance to recruit foreign labor.

Although the Yahapalanaya government promised to end high level corruption and set up new institutions to investigate thousands of cases against the predecessor regime of Mahinda Rajapaksa, progress on this has been slow.

Lack of unity in the government grievously affected policy making, policy consistency and policy implementation. Decisions taken by the UNP or the Prime Minister would be nullified by the President, which had caused frustration among major foreign investors like China and India.

During the honeymoon period when the government was enjoying goodwill all around, the government promised to re-draft the country’s constitution to end the 70 year old ethnic problem involving the majority Sinhalese and the minority Tamils. But the ardor has dimmed over time, as both the communities feared the worst about the attempt to change the constitution and hardened their stand.

The Sinhalese began to feel that the constitution will give too much to the Tamils, and the Tamils felt that government was backing out of its commitments to them for fear of losing its Sinhalese voter base.

Based on the content of the Interim Report on the new constitution, the Sinhalese led by nationalists such as Rajapaksa and the top rungs of the Buddhist clergy, alleged that Sri Lanka will cease to be a “unitary” State and become “federal” which, according to them, will be a stepping stone to the secession of the Tamil areas of the North and East.

Fearing rejection and loss of power, government leaders from the President downwards, pledged that they will not do away with the “unitary” State and will not bring about a constitution which does not pass muster with the top Buddhist clergy.

The stance of the government annoyed the Tamil leaders and dismayed the Tamil masses, who had overwhelmingly supported Sirisena in the January 2015 Presidential election in the hope that they he will give them a political solution based on regional autonomy.

While disappointing the Tamils in regard to constitution making, the government also failed to deliver on other promises made to them and the UN Human Rights Council (UNHRC).

The Office of Missing Persons (OMP) is yet to start functioning. A credible Sri Lankan-led Judicial Mechanism to investigate and try cases of alleged war crimes is yet to be set up. There has been commendable progress in the return of seized lands to Tamil civilians .But the military’s overbearing presence in the Northern Province is still an irritant.

Apart from the fate of thousands of missing persons, the continued detention of about 132 Tamil prisoners is a major emotional issue among the Tamils.

While the Tamils consider these to be “political prisoners” who ought to have been released after the war ended in May 2009, the State considers them to be hardcore cadres of the Liberation Tigers of Tamil Eelam (LTTE). some of whom have serious cases against them. Three of them had allegedly massacred 38 Sri Lankan soldier-prisoners towards the end of the war.

TNA Forced To Choose Side

The leaders of the Tamil National Alliance (TNA), who support the Sirisena government have been wanting to speed up the investigations and trials, but the government has been too slow, partly on account of the tardy judicial process and partly out of a fear that releasing detainees of this sort will cost it Sinhlese-nationalist votes.

In the meanwhile, anger has been brewing in the Tamil community, which has begun to accuse of the TNA of not doing enough, given its “influence” as the government’s “loyal opposition.”

Sensing the Tamils’ mood, the TNA supported the total shut down in the Northern Province last Friday and boycotted Sirisena’s visit to Jaffna on Saturday.

Sirisena boldly met the demonstrators led by the firebrand M.K.Shivajilingam and warned them frankly that if the Tamils stop supporting his efforts to render justice, the “devil” (Rajapasa) is waiting to step into his shoes.

The government has failed to help Tamils on the economic front too. Steps to promote the economic advancement of the Tamil hoi polloi are yet to be taken. The accent has been on improvement of infrastructure like arterial roads and railways which do not address the day to day problems of the people who are yet to recover from the war and stand on their own feet.

Sirisena is struggling to retain his hold on the Sri Lanka Freedom Party (SLFP) which could break up in December 31 if the deadline set by the President for setting the house in order is not met.

Though the house that has to be set in order is the government and not the party as such, Sirisena appears to have done precious little to get the government moving.

On the contrary, he has turned his attention to the SLFP, purging it of Rajapaksa loyalists. Seeing that offering carrots like ministerial portfolios has not worked, Sirisena is now sacking pro-Rajapaksa elements from organizational positions and replacing them by hand picked loyalists.

He hopes that the Rajapaksa camp will get the tired old warhorses and that his camp will spring to life with the injection of new blood. But even new blood cannot deliver votes if the performance of his government continues to be below par.
SAM