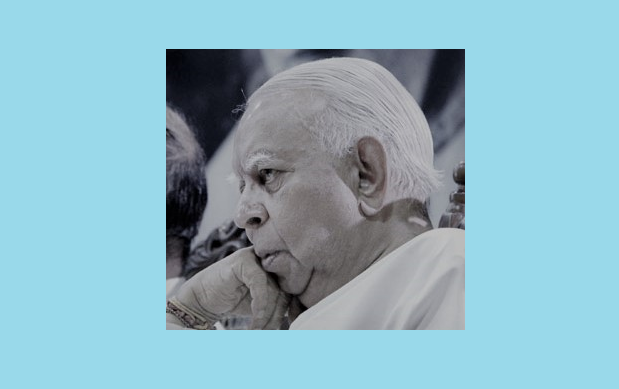 Whatever his political ideologies are, 83-year-old Rajavarothiyam Sampanthan, the leader of the Tamil National Alliance (TNA), and Leader of the parliamentary Opposition, is one of Sri Lanka’s politicians who has the distinction of living a simple and austere life.

Not for him are the luxury Government bungalows, hand crafted teak furniture or wooden flooring, wall mounted HDTVs in different rooms, expensive curtaining and airconditioning most ruling party politicians are now accustomed to.

He lives in a third floor dilapidated apartment at the Summit Flats. The rain soaked plywood front door has peeled into strips at the bottom. The drawing room is some ten feet by twenty feet area. A quarter of the space is taken by a large table. Stacked atop are the foldable foam rubber mattresses of a group of Ministerial Security Division (MSD) personnel who provide protection. The four chairs in the drawing room have seen much better days. The covers of the foam rubber cushions are worn out. They have changed colour after constant use. One loose arm of a chair is tied to the seating pane with a roll of thick thread. A second chair shook as the legs were unsteady. A few steps along a red cement stairway in the sitting area, obliterated in the middle by constant use, is his bedroom.

After the August 2016 parliamentary elections, the TNA became the largest political party other than those in the Government and Sampanthan became the Leader of the Opposition. The one-time successful lawyer from Trincomalee before he took to politics is yet to receive an official bungalow. “I have been shown a few buildings but I found they were all unsuitable,” he told the Sunday Times. Now, he said, a letter has been sent to him allocating a house. “We have to look into it,” he added.

One morning when I arrived for a meeting with the veteran politician, I was told he was at breakfast. I later learnt that his valet Gopal Murugesu had walked across to a kiosk along nearby Havelock Road to get the food — a bun.
Here are excerpts of answers Sampanthan gave to questions posed to him:

MOVES BY SLFP MINISTERS NOT TO ABOLISH THE EXECUTIVE PRESIDENCY DURING CONSTITUTIONAL CHANGES: I do not want to get involved in SLFP politics. A lot of the people who are making noises are those who were against President Maithripala Sirisena. They did not contribute to his victory in any way. They did not have the courage to go against {former} President Mahinda Rajapaksa.

ON THE SLFP WANTING TO DISALLOW A MERGER OF THE NORTHERN AND EASTERN PROVINCES: This has been discussed at the Steering Committee meetings. They will send their report to the Constituent Assembly. We will have to await their decision.

THE TNA STANCE ON THE MERGER BEFORE THE PARLIAMENTARY POLLS IN AUGUST LAST YEAR: That is well known. We have not abandoned any position of ours. We will endeavour to frame a Constitution that will be acceptable to all people including the Tamil people and the Tamil-speaking people.

The TNA said in its election manifesto last year “principles and specific constitutional provisions” paramount to the resolution relate mainly to the sharing of the powers of governance…..” It said “fundamental to achieving genuine reconciliation, lasting peace and development for all Peoples of Sri Lanka,” included “the contiguous preponderantly Tamil speaking Northern and Eastern Provinces is the historical habitation of the Tamil people and the Tamil speaking peoples.”

ON THE SLFP MOVE NOT TO SUPPORT ANY CONSTITUTIONAL CHANGE THAT REQUIRES A REFERENDUM: Our view is that nothing should be done behind the back of the people. People should approve the new Constitution at a referendum. That is the substance of the resolution adopted by the Constitution Assembly.

ON PRESIDENT SIRISENA AND PREMIER WICKREMESINGHE’S DECISION NOT TO HAVE FOREIGN JUDGES IN COURTS PROBING ALLEGED WAR CRIMES: There is a resolution adopted at the United Nations Human Rights Council (UNHRC) in October 2015. That is one of the recommendations made by the Task Force on Reconciliation. There is a need to ensure that the victims have confidence in any process. It is up to the Government to make decisions that will ensure justice is meted out.
Sunday Times