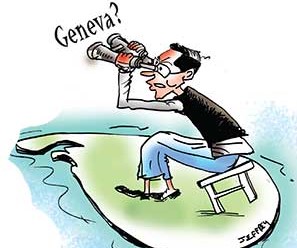 Are we beginning to see a new trend in Presidential Governance?

What exactly will the special Presidential Trio sent to the United Nations Human Rights Council – UNHCR – in Geneva do?

Will Dr. Sarath Amunugama, Mr. Mahinda Samarasinghe and Northern Governor Dr. Suren Raghavan, be a rival team to the official Sri Lankan diplomatic team led by our Ambassador in Geneva?

There are contradictory and rival attitudes here about the UNHCR’s Resolution on Sri Lanka, adopted in 2015. Many, who are from the Sinhala majority and are supportive of pro-Sinhala Buddhist policies in governance strongly oppose it. It is their democratic right. There are also many, especially those from the Tamil minority, and also from the Sinhala majority who are supportive of it, again a democratic right.

What is the third line that President Sirisena and his Chosen Trio will present to the UNHCR, this country and to the world community? It certainly is more than a mere diplomatic puzzle, and will fall in line with the baffled political thinking of President Sirisena, who has been showing for some time that he does not agree with the Resolution.

Why not get the history of this cleared. He was the Head of Government, leading a UNP – UPFA Coalition, which co-sponsored this Resolution, with the United States, the UK and several other countries. Since then, has he at any stage been openly critical or rejected the contents of this Resolution. The answer is an emphatic NO.

He did make a speech at the UN General Assembly when he said Sri Lanka must be allowed to resolve its own problems. How correct! But what has his government done to actually resolve the pre and post-terrorism problems this country has been and is faced with this?

With his emerging attitude to the UNHCR, President Sirisena maybe wanting to be the South Asian “Trump”, with his own thurumpuva against this UN body. Will the Presidential Trio or Janadhipathi Thunkattiya he has sent to Geneva tell anything as effective as what the US Ambassador to the UN, Nikki Haley, said about it? She called it a “cesspool of political bias”, and that it was a “hypocritical” body that “makes a mockery of human rights”.

Very harsh words in the field of international diplomacy, no doubt. But we must not forget that this had much to do with the UNHCR’s positions regarding Israel, the strong ally of the US and Trump, and little to do with human rights and related issues in other countries. These words were not supportive of Palestine and the Palestinian people, whose cause is supported by Sri Lanka and its people.

Will President Sirisena and his emerging Thunkattiya have anything to say about the rights of the people of Kashmir, vis-à-vis their regrettable by the powers in India? What new or alternative proposals will Sirisena and his Trio have about peace-building and reconciliation in Sri Lanka, in the situation of a rising majority-minority confrontation?

Will they promote the thinking that is rapidly gaining ground that War Heroes must not be brought to justice for any offences they may have committed, in sheer violation of the law, and nothing to do with military action or performance?

Will they follow those who consider Hilterite thinking and attitudes are the solution to Sri Lanka’s problems, and would support a call for ‘Heil Hitler” in the leadership in this country?

President Sirisena speaking at the recent launch of a book has said there is no one in this government who accepts what he says. He was emphasizing on ignoring his pro-environment and nature on the building of the new Colombo-Kandy Expressway. He does have a cause for complaint. But what action did he take, as President, Head of Government and Minister for Environment, to prevent the wrong actions he speaks of?

Was it alright as long as his SLFP members were part of the Cabinet and Government? Did he begin to see the need to expose such faults only after he did that huge violation of the Constitution on October 26 last year?

MEP leader and Joint Opposition member Dinesh Gunawardena has said President Sirisena has sent his delegation to Geneva because he had no faith in the government. He has seen the trend of things, very much in line with the Sirisena thinking of today. What a level to fall down to from the Philip Gunawardena thinking if the past!

Will we soon have a Janadhipathi Thunkattiya to act in place of the Cabinet of Ministers he presides over, to implement government or presidential policy?

Will a Presidential Trio even replace the important Houses of the Judiciary that are treated with increasing disrespect by the current presidency?

What we are moving to is more of a Sirisena Naadagama in the politics and governance of Sri Lanka.