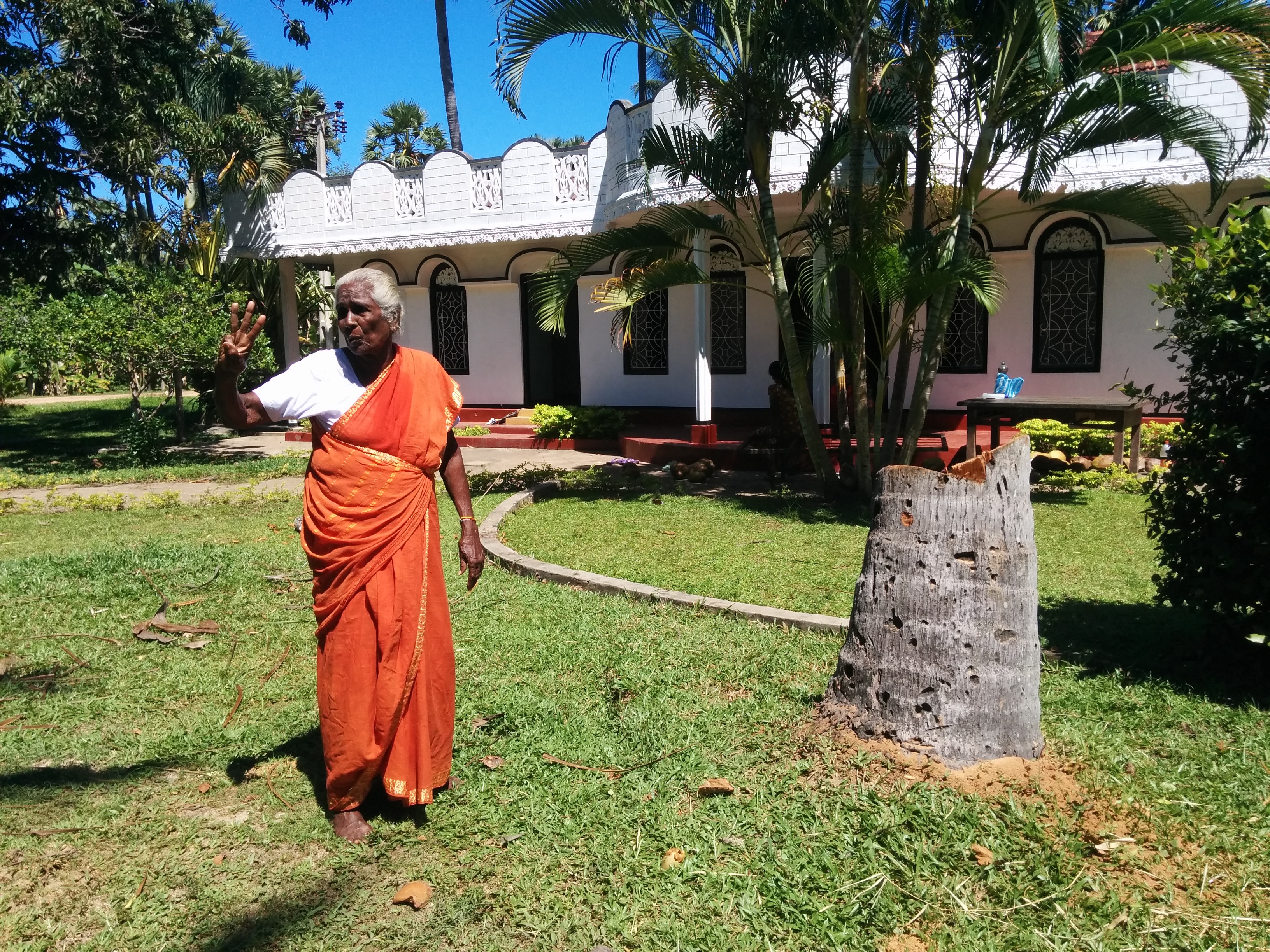 We first met 83 year old grandmother Sellamma when she was part of a protest fast outside the Puthukudiyiruppu Divisional Secretariat. At that time, her land and house across the road had been occupied by the Army for eight years. She was protesting along with her neighbours, mostly women, whose lands and houses had also been occupied by the Army. Even after a meeting with the Prime Minister in the early stages of the protest, they had vowed not to give up their protest, until their houses and lands were handed back to them.

After a month’s protest, Sellamma and some of her neighbours, were successful in forcing the Sri Lankan government and its’ Armed forces to return some parts of their village back to them. It was joyful occasion to meet Sellamma, her son, relatives and neighbours back on their own lands and houses last week.

But rather than talk about their victory in making the Army relent, Sellamma talked to us about the pitiful state in which they found their houses and the land, upon their return. She personally took us around to show us all the damage done.

“They (the army), must have been angry with us because we were protesting and asking for our homes back, so they destroyed our houses. We heard them (the army) breaking things whilst we protested across the road. I don’t know why they would do this to us? When we stepped into our home for the first time since 2008, there was shattered beer bottles and other glass pieces covering the entire floor. Our houses were stripped of its doors, some windows, kitchen sinks, the glass from our cabinets, and electrical fittings. Some window grills and glass were broken or removed all together, and entire roofing sheets had been removed from my son’s house. The toilet mirror has been taken, and the toilet is also not in working order anymore. They (the army) have cut our coconut trees and built summer huts in our garden. A few houses in our neighborhood have been razed to the ground. When we were brought back after the war to see our houses in 2014, these houses were all intact.” Sellamma told us.

“This was our ancestral house where my seven siblings and I grew up with our parents. The army has bulldozed our main house and kitchen to the ground post-2011, when we were last brought here to see our homes. We had a separate kitchen because there were so many of us to feed. I don’t understand why they would do this? The Army had built an outdoor kitchen complex in our garden, with a pipe leading straight from the kitchen to the well. The waste water from the kitchen has also gone back along the pipeline to our well and contaminated it. Our well is also now infested with insects and snakes, so we have covered it up, as the smell too is unbearable and the water is unusable,” said another returnee, of her recently released home in Puthukudiruppu.

“Our house used to be over there,” said an old amma (mother) pointing across to what now resembled a field. “They (the army) have mined so much sand there, that the land has become all marsh land now. It’s covered in overgrown grass and water, s0 that we can’t even access it anymore. Our house too has been destroyed,” she said sadly.

While Sellamma’s struggle and victory is inspiring, the sad reality she has had to return to, would have serious implications on the reconciliation process.

Firstly, why must elderly women like Sellamma resort to fasts and protests for the government to fulfill basic commitments it has made to the people and the UNHRC, such as releasing military occupied land?

Secondly, why did the Army destroy and loot these houses and properties prior to returning them to their rightful owners?

Thirdly, why is there zero government support for recent returnees, now returning home after eight years of displacement due to military occupation?

Fourthly, when can returnees expect compensation/reparation for the use of lands and houses by the Army, loss of income generation due to the occupation, destruction of property and trees, and losses as a result of looting by the Army?

Lastly, all the land releases so far, have been partial releases. In Puthukudiyiruppu, only about 7 acres of lands out of 19 been handed over, after a month long protest fast. Villagers told us that the Army had committed to release another 10 acres in 3 months time, and another one acre after 6 months. But will these promises be kept?

Sellamma’s struggle is one of many struggles against military occupation of lands in the North that gained prominence last month. Sustained, indefinite protests had led to release of lands in Pilakudiyiruppu and Paravipaanchan, which were released a few days prior to the Puthukudiyiruppu land release. When we visited these villages, we saw the trail of destruction left by the occupiers – the Air Force and the Army. We were told that there was no support at all from the government towards resettlement. We experienced and heard of continued intimidation and surveillance by the Air Force in these areas. At the same time, protests demanding the return of military occupied lands continue in areas such as Keppapulavu.

Celebrating Sellamma’s and others’ victories, as a result of sustained fasts and protests is still difficult, in the backdrop of returnees struggling to cope with military destruction of their homes, receiving no support from the government, including basic shelter and livelihood support, and continued protests of others displaced to regain their land still under military occupation.