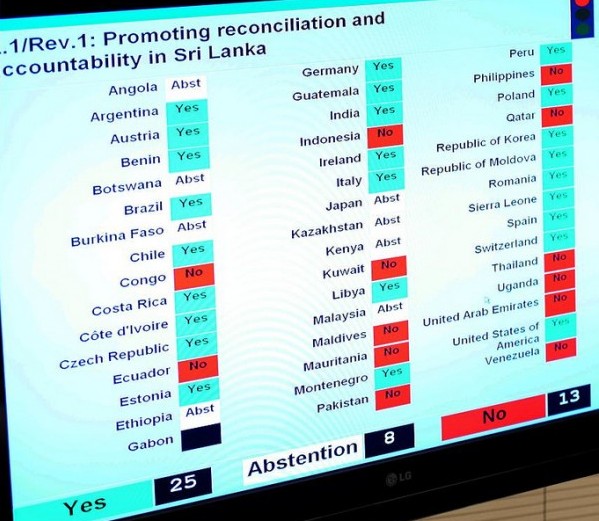 M.A. Sumanthiran MP
The recent passage of the second UN Human Rights Council resolution on reconciliation and accountability in Sri Lanka was a triumph for all its citizens. This is because it is now clear that Sri Lankans who desire ethnic reconciliation, democratic reform, positive peace, justice, and an end to the culture of impunity are not alone.
The international community’s disapproval of the incumbent regime’s intransigence is a clear message to the government that it would do well to heed the voices of moderation within Sri Lanka.

The text of the Council’s resolution reveals major changes from last March. These include increased references to the issue of accountability for international human rights and humanitarian law violations; recognition of an explicit obligation on the government to conduct a credible and impartial investigation into those violations; acknowledgement of continuing violations of a whole gamut of fundamental rights in Sri Lanka; recognition of the report of the High Commissioner for Human Rights; and the ‘noting’ of a call by the High Commissioner for an international inquiry into alleged violations of international law. Thus, while the original text was finessed down in later versions, the resolution is a sign of real progress from March 2012.

More critically, the resolution received the support of almost the entirety of the European, Eastern European and Latin American blocs, along with a clear majority of African votes. Even in Asia, India was joined by South Korea in supporting the resolution, while Japan and Malaysia – loyal friends of the Sri Lankan government – abstained.

This resolution was not, therefore, western. Neither is respect for values of equality, democracy, liberty and justice. Instead, these are deeply cherished universal values, explaining the cross-continental support for the resolution. Indeed, some of the votes in favour of the recent resolution came from countries like Sierra Leone, whose Representative noted just prior to his affirmative vote that his country was “[a] country that witnessed a bloody and destructive ten year civil war; a country that has bounced back from that bloody and destructive civil war through genuine reconciliation and accountability.

We are compelled to support this resolution.” India, which helped Sri Lanka receive a congratulatory resolution in 2009, has now reflected the views of its citizens in reflecting an appreciably more critical tone and position. The government must understand this trajectory clearly. Its strategy of alienating the democratic world and banking on a few perceived supporters is gradually eroding support worldwide. Put simply, the geopolitical argument for reform is strong.

Even stronger is the urgent need for Sri Lanka’s Peoples to embark on a cathartic process of reconciliation. If we fail, the toxic mix of religious and racial intolerance, unremedied grievances and an absence of the rule of law will take its inevitable toll. Arresting the current trend is critical in the North and East – where Tamils live with a permanent military siege and fear – but also for members of other communities.

The recent emergence of extremist ethno-fascism has rendered the Muslim people vulnerable, thus reflexively invoking memories of 1983. In the South, families of victims of State, LTTE, or armed rebel violence also deserve an acknowledgment of their grief and the truth relating to the loss of their loved ones.

That is why the TNA supports calls for a genuine accountability process that delivers on all victims’ rights to truth, justice, reparations and guarantees of non-recurrence. In doing so, we are giving voice to the deep and anguished calls of our own people, not for revenge, but for a just peace.

The Human Rights Council has spoken clearly. Sri Lanka must now implement the constructive recommendations of the LLRC, but also conduct an independent and credible investigation into violations of international human rights and humanitarian laws.

As we have noted many times previously, only an international investigation can satisfy the conditions of independence and credibility. The government of Sri Lanka has a choice: elect to do the right thing, or lose the choice to decide.
DBS