Sampanthan stands by Sumanthiran & appeals for unity among the Tamils to achieve a political solution. 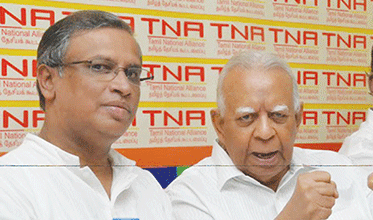 My attention has been drawn to the interview said to have been given to the media by Mr. M. A. Sumanthiran, President’s Counsel, former Member of Parliament Jaffna District, and Spokesman for the Tamil National Alliance.

Mr. Sumanthiran has been frank and forthright in his answers to questions that have been asked with the deliberate purpose of promoting mischief and disunity amongst the people of this country particularly amongst the Tamil people with the ulterior purpose of sabotaging efforts to find a resolution to the National Question within the framework of a single united undivided and indivisible Sri Lanka.

Over the past 30 years after the signing of the Indo Sri Lanka agreement and the enactment of the 13th Amendment to the Constitution much work has been done by successive Presidents and Governments, under the leadership of President R. Premadasa, President Chandrika Bandaranayaka Kumarathunga, President Mahinda Rajapaksha, President Maithiripala Sirisena and Prime Minister Ranil Wickeremesinghe to bring about a resolution to the National Question based upon substantial consensus catering to the needs of a multiethnic, multilingual, multicultural pluralistic society all of which are matter of record.

The questions posed to Mr. M.A. Sumanthiran are intended to promote confusion amongst all people, both the Sinhala and Tamil people. The purpose of this interview is to disturb the ongoing process amongst all people both Sinhalese and Tamils. The people should not get confused and misled by such mischievous endeavors.

During the history of a long political struggle for equality and justice such as the Tamil political struggle which commenced in 1949 and has lasted over 70years various events have taken place. The Tamil struggle when it commenced was democratic, peaceful and non-violent. The Liberation Tigers of Tamil Eelam (LTTE) commenced their armed struggle in the late 70s and early 80s, after a period of 30years since the commencement of the democratic peaceful and non – violent Tamil struggle.

If there had been a reasonable resolution to the Tamil Question in the first three decades, the LTTE would never have emerged on the scene. It was the failure of the majority leadership to implement pacts and agreements entered into with Tamil Leader Mr S.J.V. Chelvanayakam who was committed to non-violence that resulted in the emergence of LTTE. Even during the time of the armed struggle which lasted till 2009, the peaceful Tamil political struggle continued and continuous up to date.

The people of this country need to look at how the future can be bright for all people, on the basis of justice equality. Mr Sumanthiran whose ultimate interest is in a just and acceptable resolution has answered questions from this perspective. He has also expressed his own views on some issues. There can be progress and prosperity in Sri Lanka and for all its people only if the National Question is resolved on the basis of permanent peace evolved through a resolution based on justice, equality, self-respect and dignity.

I would appeal to all the people in this country, the Sinhalese Tamils and all others not to be misled by such mischievous endeavors and to concentrate on the efforts to find a reasonable and acceptable resolution to the National Question based on a substantial consensus.

I would like to communicate to the Tamil people of the Northern and Eastern Provinces that our strength to achieve a reasonable and acceptable resolution lies in your being united behind such a position rather than giving expression to contradictory views on issues that are perhaps not strictly related at present to the resolution of the National Question.

It will be the duty of every citizen to strive unitedly to the achievement of this objective.