‘Rubbing salt in our wounds’: Thajudeen’s family hits back at Mahinda 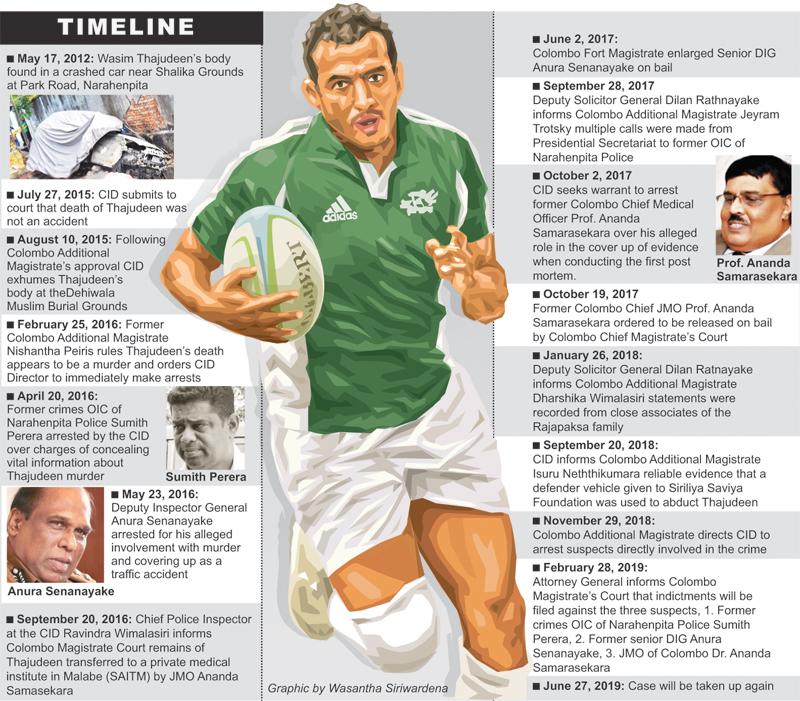 Mahinda Rajapaksa’s claim that the star rugby player was killed driving at 175km per hour has irked the murdered sportsman’s family after his administration presided over a murder cover-up for three years. Sunday Observer can reveal new details this week, about the last few hours of Wasim Thajudeen’s life and how telephone analysis has linked officers formerly attached to the Presidential Security Division to the scene of the ‘accident’

The family of murdered Sri Lankan Rugby Captain Wasim Thajudeen broke its silence last week, after former President Mahinda Rajapaksa quipped callously at a SLPP event in Kegalle that it was speed that had killed the young sporting icon, even after a court ruled his death a murder three years ago.

Ayesha Thajudeen, the sister of the murdered rugby player has refused press interviews for many months. Her family, she says, has been faced with one bitter disappointment after the other for seven long years, on the road to getting justice for her brother Wasim.

But the remarks by former President, whose family is at the centre of the scandal surrounding the star sportsman’s suspicious death, goaded Ayesha into speaking to the Sunday Observer last week.

“It is ridiculous to still say my brother’s death was an accident when it is scientifically and judicially proven – with a clear court ruling – that it was murder,” Ayesha said in an interview, breaking her long silence on the subject.

Rajapaksa, now Opposition Leader told the SLPP rally in Kegalle that “only Knight Rider could have saved” Thajudeen, whose vehicle, he claimed, had been travelling at 175km per hour when it crashed on Park Road, Colombo 5 seven years ago. 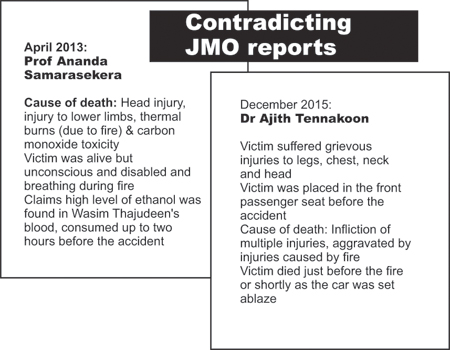 At the time of his death, on May 17, 2012, Wasim Thajudeen was 28-years-old. His remains were recovered lying on the passenger seat of his charred car near Shalika Grounds on May 7, 2012.

Police ruled the death a traffic accident, with a report by a Judicial Medical Officer Ananda Samarasekera to back the claim. Samarasekera’s report found evidence of alcohol in the sportsman’s blood and claimed carbon monoxide poisoning from the crash had caused the victim’s death.

The strange death of a young man in his prime, his well-known relationship to the first sons and the rugby clubs rivalry sent the rumour mill into overdrive soon after the crash headlined in the newspapers. For years, speculation swirled about truth of the “accident”, ultimately making Wasim Thajudeen a campaign slogan in the 2015 presidential election, with the common opposition using his mysterious death to illustrate the hubris and impunity with which the former ruling family had conducted its affairs.

It is distressing enough for Thajudeen’s family that the murder investigation has taken this long to reach a conclusion. For Ayesha Thajudeen, the remarks by Opposition Leader Rajapaksa, during whose presidency her brother was murdered, was a case of rubbing salt in her family’s wounds.

“Our only hope now is that justice will be served by God,” she told the Sunday Observer. “Mahinda Rajapaksa is only making a fool of himself by making such statements. He is inviting unnecessary discussion when the court has ruled that it was murder,” she added.

Ayesha Thajudeen is right. In February 2016, following exhumation of her brother’s body and a second post mortem that extensively contradicted the first, a judge ruled that Wasim Thajudeen had been murdered. The CID was ordered to make arrests in the case. A panel of three doctors confirmed that Thajudeen’s femurs, pelvic bones and teeth had been broken prior to his death, a senior official familiar with the investigation into the rugby player’s murder told the Sunday Observer.

Former President Mahinda Rajapaksa has cause for concern. In the past four years, the investigation into Wasim Thajudeen’s murder has repeatedly reached very close to home. The Attorney General reported to court that there was “reliable information” that a defender vehicle linked to former First Lady Shiranthi Rajapaksa’s charity, the Siriliya Saviya Foundation, had been involved in the chase and abduction of Wasim Thajudeen on May 17, 2012.

Extensive analysis of telephone records on the night of the murder has identified phone calls involving Narahenpita Traffic OIC Sumith Perera and a Senior Superintendent of Police formerly attached to the Presidential Security Division (PSD), and placed at least one other PSD officer near the scene of the ‘accident’ on Park Road.

Analysis of Thajudeen’s mobile telephone has also revealed that he made a final phone call to his friend Sahreen Rief, shortly after midnight. The phone call lasted several minutes, and revealed the stunning detail that up to 30 minutes before his death, Wasim Thajudeen knew he was being pursued and marked for attack. Thajudeen told Sahreen during that brief phone call, that he would probably never see her again, authoritative sources told the Sunday Observer. Less than an hour later, the rugby captain’s car was ablaze on Park Road.

Phone call analysis has also found that then DIG of the Colombo Crimes Division (CCD) Anura Senanayake, who is also a suspect in the Thajudeen murder investigation for allegedly covering up the killing, called the CCD less than an hour before the murder and asked for a ride to the CCD Headquarters in Kolonnawa from his residence in Rajagiriya.

The Attorney General has informed Court that analysis was also being conducted into the telephone processing systems at the President’s House, the Presidential Secretariat and Temple Trees in connection with the 2012 murder.

There has also been endless speculation about an alleged love triangle involving Thajudeen and the former President’s son Yoshitha. Hambantota District MP Namal Rajapaksa and his brother Yoshitha, both rugby players themselves have been questioned in connection with the investigation into Thajudeen’s murder.

Wasim Thajudeen, who also captained the Sri Lanka Rugby Team, led the Havelocks Sports Club team, while Namal and Yoshitha Rajapaksa played for the rival Navy Club team. In sporting circles, Thajudeen has been described as being arrogant and irreverent in his alleged encounters with members of the former first family. MP Namal Rajapaksa has always insisted that Wasim Thajudeen was a friend and fellow sportsman, repeatedly denouncing what he has called efforts by the current Government to politicise his murder.

In the first three years since his death, Police maintained that Thajudeen, after attending a party, was driving towards the airport when he lost control of his car and crashed on to a wall of Shalika Grounds, damaging the wall.

However, long time residents of Park Road, who spoke to Sunday Observer this week, said that the wall had been broken long before the accident in 2012.

Years after the preliminary JMO report, on July 27, 2015, CID submitted to court that they believed that Thajudeen’s death had not been an accident. On August 10 the same year, following Colombo Additional Magistrate’s approval, the CID exhumed Thajudeen’s body at the Dehiwela Muslim Burial Grounds.

A fresh post-mortem was carried out on the exhumed remains. In early December 2015 an expert board comprising Colombo Chief JMO Ajith Tennakoon, Specialist Dr. Jean Perera and Additional JMO S.G.A. Hewage handed over a second report to the Colombo Additional Magistrate Nishantha Pieris.

Its content startlingly revealed that Thajudeen had in fact succumbed to injuries during a brutal assault. The ruggerite had multiple injuries on his legs, chest area and neck. The report also contradicts Samarasekera’s original finding that the victim died of carbon monoxide poisoning. Instead, the second post-mortem found that the mount of carbon monoxide present in Thajudeen’s body showed that he had died just before or only moments after the car began to burn.

As a result of the second post mortem report, Prof. Samarasekera, who had conducted the initial report in 2012, found himself in hot water.

When the case was taken up on February 25, 2016 former Colombo Additional Magistrate Nishantha Peiris ruled Thajudeen’s death appeared to be a murder and ordered CID Director to immediately make arrests.

Three arrests were made. Former crimes OIC Narahenpita Police Sumith Perera, Deputy Inspector General Anura Senanayake, and Colombo Chief Medical Officer Prof. Ananda Samarasekara were named as suspects for their attempts to cover-up the murder. The trio was not charged for their involvement in the crime.

In one of the hearings of the case Deputy Solicitor General Dilan Rathnayake said multiple calls had been made from the Presidential Secretariat to former OIC Narahenpita Police on the night of Thajudeen’s murder.

The defender vehicle has been a key lead for investigators. The vehicle bearing the registration WP KA 0642 was owned by the Sri Lanka Red Cross Society and donated to the Carlton Siriliya Saviya Foundation chaired by former first lady Shiranthi Rajapaksa.

This vehicle, originally white, was painted twice (to blue and black).Prof. Ananda Samarasekera, who is suspected of having falsified the first post mortem report into Thajudeen’s death only got a six month suspension as JMO. When the CID moved to arrest him, as the third suspect trying to cover up a murder, Prof. Samarasekera filed a fundamental rights application in the Supreme Court and succeeded in blocking his arrest by law enforcement. He joins a long list of Rajapaksa era officials who have obtained these unprecedented orders to block arrest in legitimate criminal investigations by the country’s apex court. The Sunday Observer made several attempts to contact Prof. Ananda Samarasekera for comment, but the calls went repeatedly unanswered. To date, the CID has only been able to arrest suspects involved in the cover-up of Thajudeen’s murder. To get to the actual killers has proved a far more difficult task. Shifting political sands, and the potential return of the Rajapaksa regime to power holds witnesses back from testifying, denying investigators critical information needed to conclude the case, officials familiar with the investigations told the Sunday Observer. In every emblematic case involving violent crimes committed during the Rajapaksa regime, investigators keep hitting this same roadblock. None of this is surprising to Ayesha Thajudeen. “The whole world knows what Mahinda Rajapaksa and his family are like,” she told the Sunday Observer, “what more can ordinary citizens do to find justice in this country?”