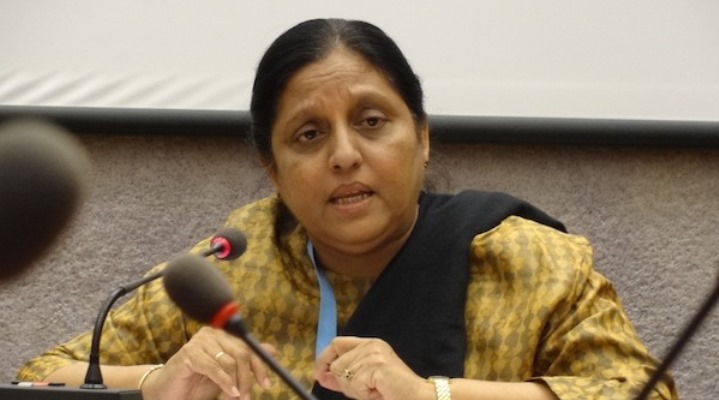 Making a statement at the on going 27th session of the UNHRC, Dr. Nimalka Fernando called for ”international solidarity and protection for all human rights defenders, lawyers, media personnel and civil society organisations who are facing threats for resisting authoritarianism in Sri Lanka and working to give effect to the resolutions on Sri Lanka passed by the HRC in 2012, 2013 and 2014 to promote reconciliation and human rights in Sri Lanka.”

The statement was made on behalf of the International Movement Against All Forms of Discrimination and Racism ( IMADR).

We welcome the statement made by the High Commissioner Zeid. We wish to reiterate the need to provide effective protection to all human rights defenders all over the world and strengthen protection mechanisms for those cooperating with the UN, especially with this Council and other mechanisms including the Commissions of Inquiry. It is unfortunate that the Government of Sri Lanka has refused to co-operate with the OHCHR investigation, and is determined to unleash a fear of possible detention and prosecution of those wishing to give evidence before this mechanism. The Government-controlled media and political leaders of the ruling party are the main sources for carrying out these threats.

Freedom of association, assembly and expression have been further threatened with the letter issued by the Director/Registrar of the National Secretariat for Non Governmental Organisations on the Ministry of Defence and Urban Development letterhead addressing all NGOs. The main part of this letter focuses on ‘Non-Governmental Organisations acting beyond their mandate’ with emphasis on “It has been revealed that certain Non Governmental Organizations conduct press conferences, workshops, training for journalists and dissemination of press releases which is beyond their mandate. We reiterate that all Non Governmental Organizations should prevent from such unauthorized activities with immediate effect”. This circular attempts to divide activities of NGOs as some authorised and others unauthorised. Those unauthorised will face the consequence of being ‘dis-mantled’. The purpose of the Sri Lankan authorities has been made very clear that it will attack, dismantle and demolish NGOs which are urging the Government to uphold democratic principles, respect the rule of law, investigate into the disappearances, inquire into alleged crimes committed during the war as well as into grave and serious violations of the international human rights and humanitarian laws and continuing violations. The Government of Sri Lanka has categorised democracy, human rights and independence of judiciary as anti-government terminology. The present rulers of Sri Lanka are thinking that NGOs can be bulldozed into oblivion.

Three months have lapsed with no investigation into the Aluthgama incident where the Muslim community was attacked by the extremist Buddhist organisation, Bodu Bala Sena (BBS). The riot was pre-planned. The peaceful co-existence of religious communities in Sri Lanka is being threatened without any action taken against the BBS by the regime. The convergence of political power, extremist Buddhists’ violence and security agencies in pressuring religious minorities and imposing Sinhala Buddhist hegemony have become permanent features of post-war Sri Lanka. We condemn the detention and deportation of Pakistan asylum seekers in Sri Lanka by the authorities and urge GOSL to cooperate with the UNHCR and respect its international obligations. This is threatening all attempts made by civil society organisations to promote reconciliation and dialogue transcending ethnic, religious and other such community barriers. Family members of the disappeared face intimidations and harassments regularly from the intelligence apparatus of the Sri Lankan state.

The vision and mission statements of all NGOs operating in Sri Lanka are broadly defined based on the principles of various UN Conventions and the Universal Declaration of Human Rights. The Government of Sri Lanka and its NGO Secretariat are denying us the space required to promote these fundamental principles accepted and endorsed by the international community.

We seek international solidarity and protection for all human rights defenders, lawyers, media personnel and civil society organisations who are facing threats for resisting authoritarianism in Sri Lanka and working to give effect to the resolutions on Sri Lanka passed by the HRC in 2012, 2013 and 2014 to promote reconciliation and human rights in Sri Lanka.
Thank you Mr President.