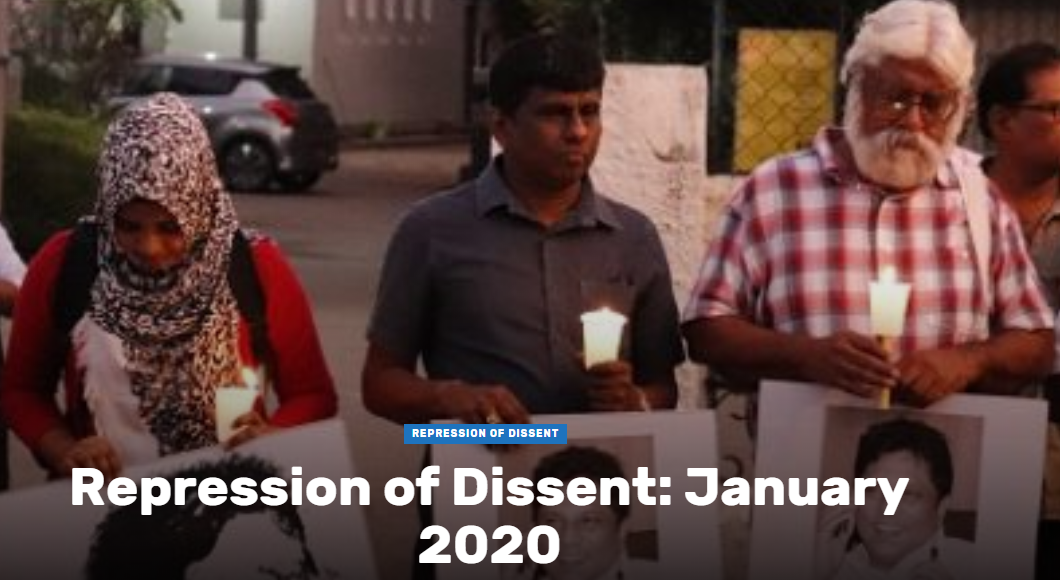 1 January 2, 2020, Batticaloa: Sri Lankan police in plain clothing has entered the house of the Batticaloa based journalist: S. Nilanthan, purportedly to arrest him, and threatened his family when it was discovered he was not at home. (https://www.tamilguardian.com/content/sri-lankan-police-threaten-family-tamil-guardian-correspondent-arrest-warrant)

2 January 5, 2020, Kilinochchi: Foreign Journalist was denied access to Iranaitheevu island by the Navy. She had a valid journalist visa and media accreditation card issued by Department of Government Information, which had been endorsed by the Ministry of Foreign Affairs. (personal interview(

3 January 10, 2020, Colombo: Officer in Charge (OIC) of Mulleriyawa Police has refused to accept a complaint made by a female journalist. about threats she has received due to her work. The OIC had also behaved in a manner that had threatened her life and dignity, according to the Free Media Movement. (Free Media Movement http://www.fmmsrilanka.lk/the-free-media-movement-condemns-the-degrading-treatment-meted-out-for-professional-journalists/)

4 January 17, 2020, Chilaw: Prasad Purnimal Jayamanne: a journalist based in Wennappuwa in Chilaw was assaulted by group linked to few politicians after he exposed unauthorized filling of a paddy field in Wennappuwa. Mr. Jayamanne has told Free Media Movement that he was assaulted by a group including the son of a former Wayamba Provincial Council member who had taken over the land filling from another former Wayamba Provincial Council member who claims to own the paddy field. (http://www.aithiya.lk/n_view.php?id=3476&lan=1)

5 January 18, 2020, Batticaloa: The Grama Niladari (GN) had visited a house of a Batticaloa based journalist around 11 am on 18th January and told him that the Criminal Investigation Department (CID) in Colombo had requested details about him. The GN has noted down the personal details of the journalist including his data of birth, place, origin, family details etc. (personal interview)

6 January 19, 2020, Jaffna: The house of a Tamil local news journalist had been attacked and vandalized by a group of unidentified men in Mannipay, Jaffna. (https://www.tamilguardian.com/content/tamil-journalists-home-wrecked-vandals-intimidation-attempt)

7 January 20, 2020, Online Journalist Azzam Ameen faced hate speech based on his ethnicity after a call recording between him and former minister Ranjan Ramanayake was released online. A statement provided by Ameen on the incident states that he had to speak to Politicians and others in his capacity as a journalist, and has always safeguarded professional integrity. He had stated that he had moved away from his employment (BBC) over the incident involving some distorted private telephone conversations which have been made public. In addition to the content of the call, he had been subjected to hate speech in an organized manner due to his ethnicity and religion as a Muslim / Islam. (https://www.facebook.com/AzzamAmeenSL/photos/a.1549879965318657/2203342193305761/?type=3&theater)

8 January 23, 2020, Batticaloa: Seven Journalists of Batticaloa Press Club had received death threats, with leaflets of their photographs highlighted, warning that they will soon be executed. The leaflets were pushed through the door of the Batticaloa Press Club building. (https://www.tamilguardian.com/content/tamil-journalists-sent-threats-death-punishment-batticaloa)

9. early January 2020, Trincomalee: Members of an NGO in Trincomalee were asked to come to the Counter Terrorism Investigation Division (CTID) headquarters in Colombo for an inquiry. Two leaders went for the inquiry. They were questioned about their funding and activities and requested to submit detailed reports. personal interview

10. January 10, 2020, Jaffna: Sri Lankan intelligence has erased Jaffna street art painting which depicts an image of a tiger, after threatening Tamil artists. Tiger symbol was used by LTTE as their symbol. However the erased artwork does not resemble the symbol of LTTE. Meanwhile many street art paintings which promotes militarization were allowed in the South. Above is the painting erased and below is the LTTE symbol depicted in the LTTE flag, from a government newspaper in January 2020. [(1) https://www.tamilguardian.com/content/sri-lankan-intelligence-erases-jaffna-street-aart-after-threatening-tamil-artists , (2) https://twitter.com/TamilGuardian/status/1215572416027602944 (3) https://www.dailynews.lk/2020/01/14/local/208360/ltte-remains-terrorist-group]

11. January 15, 2020, Mullaitivu: As reported by Tamil Guardian, Sri Lankan security forces have intruded Neeraviyadi Hindu temple’s Pongal celebrations. As preparation for the festival celebrations were underway, Sri Lankan intelligence officers were reportedly photographing those present at the temple, whilst uniformed police officials parked vehicles and conducted patrols nearby in an apparent act of intimidation. During the last decade, Buddhist monks have forcefully built a new Buddhist temple at the Neeraviyadi Hindu temple premises after Buddhist archaeological remains were discovered by the archaeological department. However, reportedly there are no Buddhists in the area. There is an ongoing legal case between two temples regarding this. (https://www.tamilguardian.com/content/sri-lankan-security-forces-intrude-neeraviyadi-temples-pongal-celebrations)

12. January 16, 2020, Mannar: Few leaders of an NGO based in Mannar were questioned by the CTID in Colombo. (personal interview)

13. January 18, 2020, Jaffna: As reported by Tamil Guardian the Sri Lankan military has interrogated a Tamil youth in Jaffna, after accusing him of leading a campaign for the removal of a military base from the local area. Soldiers have reportedly raided the house of the youth in Chulipuram, and informed his family that he was to be summoned for questioning the next day. During the interrogation, he had been asked to sign a letter stating that he did not want the military to leave the area. (https://www.tamilguardian.com/content/sri-lankan-army-interrogates-tamil-youth-after-calls-demilitarisation)

14. January 20, 2020, Jaffna: Families of the victims of the Mirusuvil massacre were threatened by unknown persons in a white van. (After about 13 years of the case, the first accused army Staff Sergeant Sunil Ratnayake was found guilty for the murder of eight civilians in Mirusuvil, Jaffna has been sentenced to death by the Colombo High Court on 25 June 2015. Current President Gotabaya during his presidential campaigns has told that he would release all the military officers who have charged with serious crimes). [(1) https://www.jvpnews.com/community/04/254898 , https://www.tamilguardian.com/content/men-white-van-intimidate-relatives-mirusuvil-massacre-victims (2) http://www.adaderana.lk/news/58267/gotabaya-pledges-to-release-imprisoned-war-heroes-by-nov-17]

15. January 21, 2020, Vavuniya: A woman activist predominantly working with the war affected children and families was asked to come to the CTID on the 21st Jan 2020 for an inquiry. After she informed the Human Rights Commission of Sri Lanka, they have spoken to the CTID and subsequently told the activist that it is not necessary for her to go. personal interview

[title]C. Legal changes, appointments and other developments that may impact dissent[/title]

16. January 1, 2020:  Shavendra silva allegedly accused of crimes against humanity during the war was appointed as acting chief of defence staff. Army Commander Lieutenant General Shavendra Silva was appointed as the acting Chief of Defense staff by the President. effective from 1 January 2020, in addition to his present office of the Commander of the Army. (https://www.army.lk/news/incumbent-army-chief-serve-acting-chief-defence-staff)

18. January 15, 2020: A cabinet decision is reported to have been taken to draft National Intelligence Act which would legalize impunity for intelligence officials. Activists have also expressed concerns about this act stating that it could be also used as a tool for repression of dissent [(1)https://www.facebook.com/newslk/videos/467918424163343/ [9.00 -10.00 minutes], (2) http://www.jdslanka.org/index.php/news-features/politics-a-current-affairs/923-sri-lanka-to-legalise-impunity-for-intelligence-officials (2) Article in “Anidda” Sinhalese paper, 26th Jan. 2020, page 15.]

19. January 22, 2020: Legal Draftsman was reported to be finalizing the proposed Cyber Security Act (1). When a draft act was presented by the previous government, activists have expressed concerns whether this will be used to repress the dissent (2) and others asked time for wider public consultation on the protection of privacy and defending the freedom of expression online. (1) (http://www.defence.lk/Article/view_article/837 (2) https://mawbima.lk/news-more/17083 (3) https://www.vikalpa.org/?p=35087)

20. January 16, 2020: Commodore DKP Dassanayake who has been accused of abduction of 11 youth case was promoted to the rank of Rear Admiral and then appointed as the Commander of Northwestern Naval Area. (http://www.hirunews.lk/232391/commodore-dkp-dassanayake-promoted-to-the-rank-of-rear-admiral (2) https://ceylontoday.lk/news-more/12019)

21. January 18, 2020: CA Chandraprema, who has been named as a member of a death squad group in late eighties in an affidavit and been arrested, was reported to be appointed as Sri Lankan envoy to the UN in Geneva (https://www.colombotelegraph.com/index.php/proposed-sri-lankan-envoy-to-geneva-c-a-chandraprema-was-a-member-of-prra-death-squad/)

22. January 27, 2020: The Presidential Commission inquiring into incidents of alleged political victimization has requested the Attorney General (AG) to suspend court proceedings, where the former Commander and Spokesperson of the Navy are implicated. AG has refused to follow the order saying Presidential Commission does not have an authority to do so. (https://srilankabrief.org/2020/01/sri-lanka-presidential-commission-of-inquiry-ordered-ag-to-suspend-cases-against-two-military-leaders/ https://colombogazette.com/2020/01/28/ag-refuses-to-bow-down-to-pcoi-instructions/)

23. January 29, 2020: Colombo Former Director of the Criminal Investigation Department (CID) Director Shani Abeysekera had lodged a complaint with Police On Alleged Death Threats from an unidentified person. the Witness Protection Unit of the Department of Police has requested the CID and the intelligence agencies to launch an investigation into the complaint lodged by Abeysekera. The former CID Director has also requested Police protection in the light of alleged death threats. https://mail.asianmirror.lk/news/item/30798-former-cid-director-shani-abeysekera-lodges-complaint-with-police-on-alleged-death-threats, ( http://www.ft.lk/front-page/4-8-b-debt-to-be-repaid-in-2020/44-692599)