Reporter’s diary: the charge of the saffron brigade in Sri Lanka 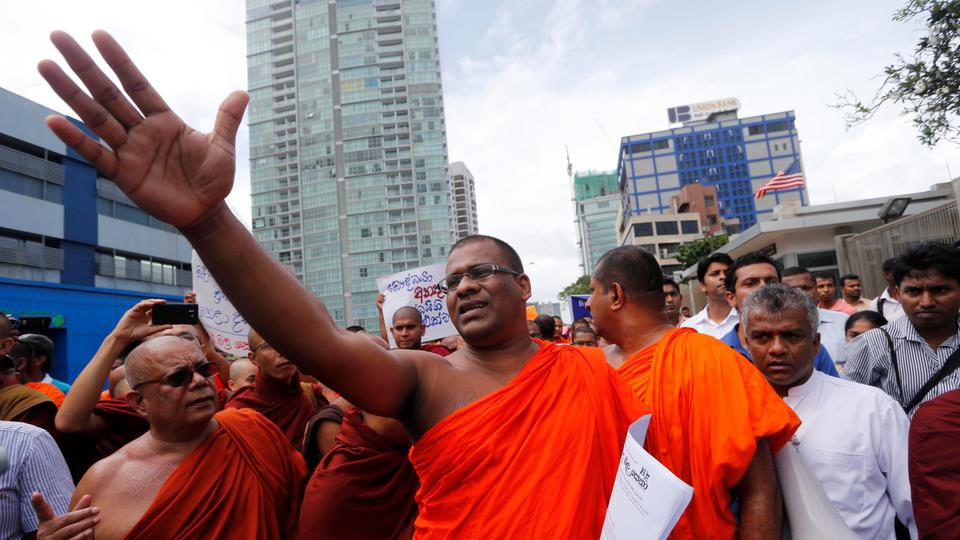 Bodu Bala Sena leader Galagoda Aththe Gnanasara is a man whose words lead to action. When he threatens Muslims in a speech, mobs ransack Muslim neighbourhoods. And people die. Off the podium, the Buddhist monk remains the ultimate showman.

COLOMBO — Galagoda Aththe Gnanasara is a well-fed man. His jowly features and rounded fleshy shoulders belong to someone who has succumbed to at least one of life’s pleasures without too much resistance. Tall and sturdy, Gnanasara is far removed from the time-honoured image of a sinewy Buddhist monk who sustains himself on a bowl of rice daily as he puts his mind to matters that transcend the material world.

The Buddhist holy man is clearly seduced by all things material. His designer glasses, latest smartphone and plush four-by-four, complete with driver, are but superficial examples of this.

What really gives it away is the fact that he has, over the years, embroiled himself in the fraught world of Sri Lanka’s ethnic tensions to the point where he is now an influential – and many would say dangerous – player in some of the most contentious issues the country is facing. And he appears to be relishing every moment of it.

Gnanasara is the general secretary of Bodu Bala Sena (BBS), an ultra-nationalist Buddhist organisation. Gnanasara and the BBS, also known as the Buddhist Power Force, are blamed by many for inciting deadly violence against Muslims in the Buddhist-majority country over the last few years.

I’m clearly dealing with no ordinary monk here, and for someone who is about to grill him on some of his most controversial actions, this poses a number of challenges, not least how to keep on the right side of him without compromising the nature of the interview.

I needn’t have worried. The first time I meet Gnanasara at the mansion-like BBS headquarters in April, he seems delighted that I have a cameraman. The showmanship he displays when he’s the centre of attention lasts throughout the two days we spend with him.

He also appears to be unfazed by the fact that he’s been in court all day, facing serious of criminal accusations of hate speeches that target Muslims and other minority groups, and inciting violence.

Then again, this nonchalance may be due to the fact that he’s faced these allegations for years, but has not been convicted so far.

Gnanasara is all smiles as he shakes our hands, and this affable manner remains constant during our hour-and-a-half long interview, even when I confront him with some of the many offensive and provocative pronouncements he has made. Still, it is not too long before the duality of his nature is exposed.

I remind him of the derogatory language he uses frequently when referring to Muslims and Islam, including when he referred to Allah as “an octopus.”

During the course of the interview, I also bring up a speech he made in June 2014 in which he threatens Muslims and calls on the Sinhalese to “stop loitering, unite and fulfil your duty.”

Within hours, a group of hardline Sinhalese nationalists stormed a suburb near the town where he made the speech and burnt down hundreds of homes and businesses. At least three men died in this attack.

“How do you respond,” I ask, looking Gnanasara directly in the eye.

He does not flinch or show any remorse as he replies, “Yes, I will say that even tomorrow. It won’t change. What is said there is true. The truth is the truth.”

At times he is openly offensive, but he slips these comments in when I am least expecting them.

When I ask him, “Do you believe Muslims are causing problems in Sri Lanka?” he starts off in the most diplomatic of tones. “We have Muslims who are traditional and moderate,” he says, “who have lived for generations in this country. Such Muslims and the Sinhalese lived in co-existence for years.”

But then he hits me with, “What country in the world does not have problems caused by Muslims? There is only one problem, and it is a global problem.”

His manner has been so appeasing that when he reveals what he really thinks, it completely throws me.

He talks about national unity and reconciliation, dialogue and non-violence. But when I ask him if he believes violence is unacceptable, his reply is quick and confident.

“If a violent group arrives and starts attacking the non-violent people who are meditating, should we just wait and watch?”

The threat is thinly veiled, and could very easily get lost because of the manner in which it is made, but human rights groups dispel any doubts about his real intentions.

“They have been open about their hatred towards many minorities, not just Muslims but also towards others,” says Omar Waraich, Amnesty International’s Deputy Director for South Asia, referring to Gnanasara’s organisation BBS.

“We certainly believe elements of the BBS have been inciting hatred that has led to violence.”

It is clear that incitement to hatred is having a pernicious effect within Sri Lanka, which is leading to minorities to being targeted.”

Waraich articulates a widespread concern but despite this, BBS’s popularity seems to be growing among more moderate sections of Sinhalese society, in particular those who fear their ethnic identity may one day become sidelined.

As Kalana Senaratne, a senior law lecturer at the University of Peradeniya in Kandy, explains, “Some of his speeches have been clear cases of inciting violence. But he also advocates a more moderate position.”

“He knows the politics of Sinhalese nationalism and also how to respond or talk to a wide segment of Sri Lankan society.”

Gnanasara employs this tactic during the interview. He is articulate and charismatic, so it’s not too difficult to see why many are drawn in by him.

But when my questions get direct and uncompromising, and there are times during the interview I worry he might throw us out. Instead, Gnanasara offers us tea and I get the sense that he’ll just about do or say anything, as long the spotlight remains on him.

It’s the same showmanship on display when I meet him a few days later at one of his temples.

I spend half a day filming him and he’s happy to do take after take under the blazing sun, to the point where my crew and I are certain that if I ask him for another three weeks’ worth of filming with him as the focal point, he would drop everything and oblige.

Our filming is interrupted at regular intervals by young monks who greet him with absolute reverence. He responds with an air of aloof grace usually seen in the mannerisms of royalty.

He also stops every now and then to cuddle and cajole the young children who are attending Sinhalese cultural classes at the temple. They, in turn, look to him with adoring eyes, as if their favourite uncle is visiting with armfuls of gifts.

His love of life manifests itself particularly at lunchtime, when he tucks into a plethora of dishes that include various kinds of chicken, at least half a dozen types of vegetables, a variety of salads and a generous choice of desserts and fruits.

All this is provided by Sinhalese families with recently deceased relatives in the belief that feeding monks is a way to ensure their loved-ones will achieve eternal peace. Judging by the manner in which Gnanasara tucks in, it’s clearly a belief he readily subscribes to.

There’s another reason for this exuberance.

Gnanasara has close ties with sections of Sri Lanka’s political establishment, in particular with members of nationalist opposition parties. This has considerably elevated his status and given him more than a veneer of respectability across large swathes of the country.

“These groups have had links with politicians, are invited to parliament to have discussions with the president and various ministers,” Senaratne says. “So it is difficult as an observer to say if this is a classic hardline Sinhala Buddhist movement or if it is one of the broader Sinhalese nationalist groups.”

This also explains why Gnanasara is addressed as thero –  venerable –  by everyone, why his group is so well-funded and why he is often invited to give talks overseas.

As my crew and I leave, Gnanasara shakes our hands and tells us he’d be happy to talk to us any time.

He is amicable to the end, most likely in the knowledge that he is virtually untouchable and nothing I or anyone else can do or say is likely to change that anytime soon.