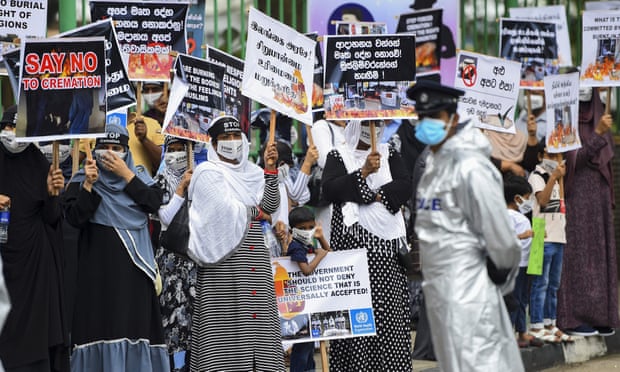 Image: A protest in Colombo in December over the Sri Lankan government’s policy of forced cremations in Covid-19 deaths. Photograph: Ishara S Kodikara/AFP/Getty ( The Guardian)

A group of Muslim families are launching a complaint to the UN Human Rights Committee (HRC) about Sri Lanka’s policy of enforced cremation of all those confirmed or suspected to have died with Covid, saying it breaches their religious rights and is causing “untold misery”.

The case seeking interim relief is being brought on behalf of the families by the Muslim Council of Great Britain and with the support of the British law firm Bindmans. It is alleged that the Sri Lankan government is enforcing hundreds of cremations despite international and Sri Lankan medical experts saying there is no evidence that Covid-19 is communicable from dead bodies.

The group of eight complainants acknowledge and accept in their claim that in battling the pandemic, “difficult decisions have to be taken which interfere with fundamental rights”. But they say the government is mandating cremation without any regard for the wishes of families or their religious beliefs.

UN special rapporteurs have written twice to the Sri Lankan government – in April last year and January this year – urgingit to respect the wishes of those who seek burial, and to recognise that the disregard of Muslims’ feelings may lead them not to present bodies for cremation.

It is alleged that as many as 200 Muslims have been cremated in Sri Lanka. In January a Sri Lankan expert committee in January accepted that burial was permissible, but the government has taken no action.

The applicants, all related to people who have been cremated, say the procedures took place without their consent or approval.

In their joint submission seeking interim relief from the Geneva-based HRC, the families claim: “All of the cremations took place in a forced and arbitrarily expedited manner, denying family members any opportunity to respect their religious and cultural beliefs. This has served only to exacerbate the terrible grief suffered by each family member and their community.

“The practice of burial, and the associated religious rituals and practices, are central tenets of the Islamic faith, a faith which is practised by a persecuted minority in Sri Lanka.”

The claim points out that on 1 January 2021, the Sri Lanka Medical Association (SLMA) issued a statement confirming that Covid-19 dead could be buried as “the virus is unlikely to remain infectious within a dead body”, and adding that there was no scientific evidence that burial posed a public health hazard.

Human rights activists say Sinhala Buddhist-majority government’s policy is part of an ongoing attack on Sri Lanka’s Muslim community, who make up 9% of the population. The president, Gotabaya Rajapaksa, was elected last year on a wave of anti-Muslim, hardline Buddhist sentiment, following the Easter suicide bombings by Islamist militants in churches and luxury hotels last April that left 267 people dead.

A case for discrimination has been lodged with the Sri Lankan supreme court, but the initial application was rejected. The case may be heard again in March.

As a signatory to the international covenant on civil and political rights, Sri Lanka is at least in theory expected to follow the rulings of the HRC.