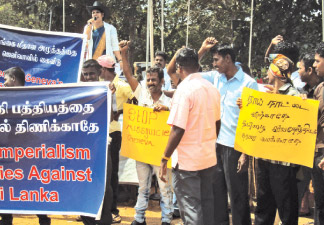 Reports received by GTN says that the forces were forcibly collecting people from Mullaitheevu and Kilinochchi localities to participate in anti UN  protests. One such protest was held on 11th March in Kilinichchi, Vanni district.
The forcibly recruited former rebels – males and females of  the civil defense forces and the pedestrians were  compelled to participate this  protest which was organized by the ruling party.

Previously arrangements were made to hold the protest   in Kilinochci and Mullaitheevu region, however due to the reason of not able to collect manpower, all were transported in buses to Kilinochchi and were directed to take part in the demonstration.

Mainly males and females assigned to the civil defense forces were in large numbers congregated at the Kilinochchi depot junction, and the protest commenced  on the leadership of Sri Lanka Freedom party, Kilinochchi district organizer Geethanjali, which was against US and the Geneva resolution.

The protest commenced at 10.30 a.m on 11th March  near Kilinochchi Central College, and marched through A9 route to the depot junction and slogans were chanted against US and against the UNHRC  resolution.

Sri Lanka Freedom party organizer Geethanjali at this protest chanted many slogans loudly,  “You take care of your job”, ” We will look after our work”, “Don’t interfere in our internal affairs for your benefits unnecessarily” ” When war was in occurrence, you backed to destroy the people”, “now don’t attempt to impede our people living peacefully”, “Our leader is Mahinda Rajapakse, none could topple Mahinda Rajapakse’s government” “Our historic hero is Mahinda” was the slogans loudly voiced by the Organizer.

The protest which was organized by the ruling party was attended by the former rebels recruited to the civil defense force. They were forcibly requested to attend.

The protestors were in the state of attempting to hide their faces from the cameras stated our special correspondent from Kilinochchi to “Global Tamil news” desk.

Mainly the vehicles traveling through A9 route are intercepted and passengers were forced to join the protest states information.

Some former rebels contacted us said, that many of them are not aware of this protest. They were loaded into buses and are detained with police protection. With much fear they related that they are compelled to attend the protest rally.

Protest arranged in Vavuniya against UN. Those joined to civil forces ay be forced to participate

Sri Lanka government has organized a protest at Vavuniya opposing to the resolution proposed  by US against Sri Lanka at the UNHRC.

This protest is to be  held  in Vavuniya on 13th March.

Sri Lanka forces and ruling political parties are engaged in taking extreme measures in organizing,  is according to information catered from Vanni to “Global Tamil news” desk.

Reports further say  that the forces have targeted approximately two thousand persons for this procession.

This rebels who had joined as Civil Defense officers, are assigned to work as slaves in the military farms, beyond their likes and dislikes, and they may be compelled for other assignments like protests.