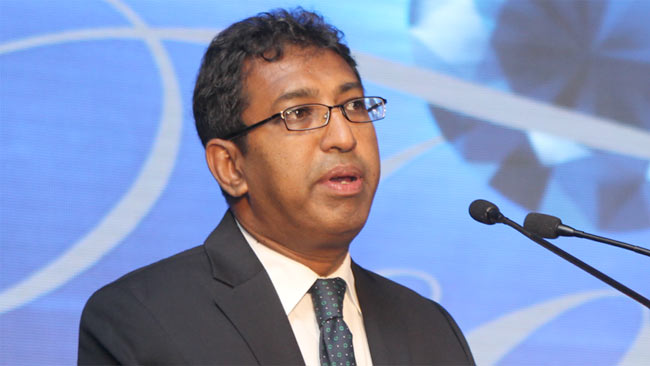 Making the opening statement  at the Third Cycle of the Universal Periodic Review of Sri Lanka- Geneva, on 15 November 2017 by Hon. (Dr) Harsha de Silva, Deputy Minister of National Policies and Economic Affairs provided a long list of Government’s human rights achievements. Further he said that “Sri Lanka has accomplished much. Yet, we do not consider it a reason to be complacent. Neither are we, as some tend to allege, indifferent or uncaring about human rights. We remain acutely aware and conscious that there is much more to be done, to ensure that all our citizens enjoy the rights due to them to their full extent. We firmly believe that citizens empowered by their individual rights will strengthen our nation.”

Referring to the several advance questions that have been submitted in relation to implementation of the commitments in Resolutions 30/1 and 34/1,  the Minister  emphasized Sri lanka is  working consistently and methodically towards that goal, including with assistance from many of you.

After the UPR Sri Lanka session came to an end today at ( 15) at the UNHRC,   Minister Silva tweeted saying that member countries comments were “very positive”.

For example, since the last UPR, Sri Lanka has participated in 6 Treaty body reviews, and the review on the Convention on the Rights of the Child is scheduled for January 2018.

Once again most of these reviews were carried out in 2016 and 2017, manifesting the Government’s clear commitment to these processes. We are determined to never slip back on reporting obligations again, and we are currently discussing ways to strengthen internal systems for this purpose, as well as the effective examination and follow-up of implementation of recommendations of treaty bodies, special procedures, and the UPR.

We will work with the UN Country Office and OHCHR, as well as ‘UPR Info’ in addressing the requirements for setting up and strengthening internal processes for this purpose, along with civil society.

-In December 2015, Sri Lanka extended a Standing Invitation to all thematic Special Procedures.

–Eight thematic Special Procedure Mandate Holders and Working Groups have visited Sri Lanka since the last UPR, with 6 of them being received in the last two years since January 2015.

-Moreover, the Working Group on Arbitrary Detention (WGAD) will visit from 4-15 December this year, and the Special Rapporteur on the Promotion and Protection of the Right to Freedom of Opinion and Expression will visit early next year.

We in fact wonder whether so many Special Procedures may have ever been received by any other country, in such a short span of time.

Additionally, we had the previous and current High Commissioners for Human Rights visit Sri Lanka in 2013 and in February 2016 respectively; and the UN Secretary-General visited us in September 2016.

-the International Convention on the Rights of Persons with Disabilities (CRPD) in February 2015,

-the Palermo Protocol on Prevention of Trafficking in Women and Children in June 2015,

-the International Convention for the Protection of All Persons from Enforced Disappearance (ICPPED) in May 2016,

-the Marrakesh Treaty to Facilitate Access to Published Works for Persons who are Blind, Visually Impaired or Otherwise Print Disabled in September 2016, and

-the Paris Agreement on Climate Change in September 2016.

-This important Constitutional Amendment reduced the powers of the Executive President and strengthened the independence of key institutions with the objective of depoliticizing the public service.

-The Constitutional Council comprises representatives from the ruling and opposition parties in Parliament, as well as independent persons with no political affiliations.

-The President’s term of office stipulated in the Constitution as 6 years prior to the 19thAmendment, was reduced to five years.

-The two-term limit of the Executive Presidency was restored.

-These provisions strengthen the separation of powers by establishing fixed presidential and parliamentary terms, restores the independence of constitutionally appointed institutions and reduces the power of the Executive President over Parliame

-It is empowered to investigate complaints of infringement or imminent infringement of fundamental rights, advise the government in formulating legislation, and make recommendations on ensuring that national laws comply with international human rights standards and on subscribing or acceding to human rights treaties.

-The Commission has been active in the recent Treaty Body reviews of Sri Lanka by submitting shadow reports, and we also welcome the Commission’s contribution to the current UPR Session. The Government has increased financial resources to be allocated to the Commission for next year.

-This Act enables a paradigm shift in the criminal justice system. The Act sets out rights and entitlements of victims of crime and witnesses.

-It provides for the payment of compensation to victims of crime, and establishes a special fund for that purpose.

-On 8 January 2016, the National Authority established under the Act was inaugurated by the President. The proposed Budget allocation in this regard for 2018, has been increased.

-The Inspector General of Police established the Witness Protection Division of the Sri Lanka Police, which is dedicated to provide protection to victims of crime and witnesses, and to investigate offences that may be committed against victims and witnesses.

-An amendment to the Act was passed by Parliament this month on 7 November, to provide for the victims and witnesses of a crime to record evidence or a statement through audio-visual linkage, from anywhere outside Sri Lanka, without personally attending Court, and to facilitate such process through Sri Lanka diplomatic Missions abroad.

-It seeks to foster a culture of transparency and accountability of public authorities, and to combat corruption.

-By giving effect to the public’s right to access information, we are seeking to promote a society in which citizens would be able to fully participate in public life.

-The RTI Commission, set up to facilitate the implementation of the Act, is operational, and the public has already begun to benefit, with their requests for information from various public authorities being facilitated.

-Measures taken include addressing sexual and gender based violence.

-Action envisaged, for which discussion and consultations are proceeding, include legal reforms affecting discriminatory laws and practices, and amendment to personal laws deemed discriminatory.

-Regulations and measures have been made to eradicate the scourge of child labour to ensure the full enjoyment of the rights of the child. Since January 2016, a Special Presidential Task Force for the Protection of Children has been functioning under the direct purview of the President. In June 2016, demonstrating commitment at the highest level of Government, the President signed a pledge on ‘Zero Tolerance of Child Labour’ during an event held to commemorate the ‘Day against Child Labour’.