Rajapaksa – JVP pact, 2005: The Executive Presidential System is destructive and harmful to the democracy of Sri Lanka 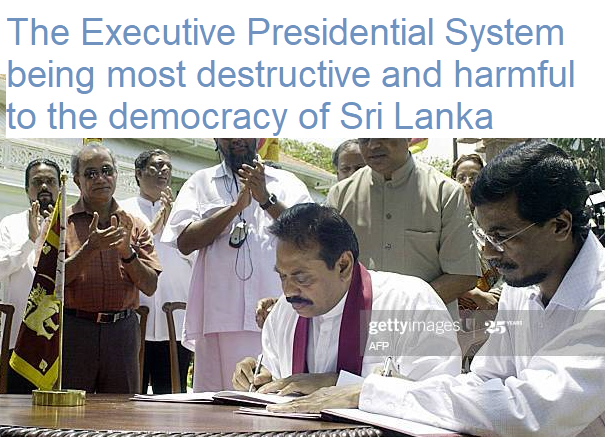 Following is the 12-point policy plan agreed by the JVP and PM Rajapakse:

01. It is hereby declared that the Post-Tsunami Operational Management Structure which was signed between the Government of Sri Lanka and the Liberation Tamil Tiger Elam (herein after referred to as LTTE) on the 24th June 2005 the implementation of which has been already stayed by the Supreme Court of Sri Lanka and also was subject to much public criticism shall not reactivate, enforce or implement in whatsoever manner and for the purpose of accelerating, expediting and regularizing the provision of the necessary relief services to all the people affected by Tsunami, a new program shall be formulated as a priority task on reviewing the existing program and to activate it forthwith through the assistance and intervention of the government. 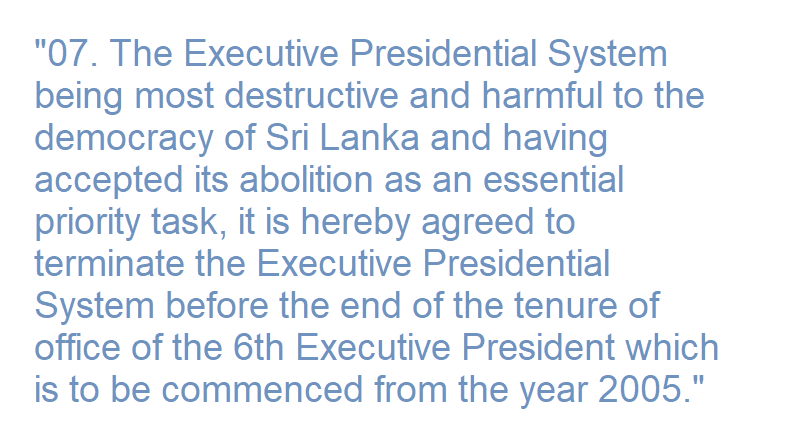 02. We believe that it is necessary to have negotiations not only with the LTTE but also with all other relevant parties to resolve Sri Lanka’s national question and that without being agreed on such lasting solution it is agreed hereby not to grant Interim Self-governing Authority or any such political or administrative structure to LTTE or to hold negotiations with LTTE on that basis.

03. It is hereby agreed to protect, defend and preserve the unitary nature of the Sri Lankan State under any solutions to be presented, formed or formulated for the purpose of the resolution of Sri Lanka’s national question.

04. It is agreed hereby that in considering the harmful and prejudicial effects and other serious implications of the Ceasefire Agreement that was entered and signed by the then Prime Minister Mr. Ranil Wickremesinghe and LTTE on 22nd February 2002, the said agreement shall be reviewed and revised fully and the said agreement shall be completely redone on removing and eliminating all the clauses which are prejudicial and harmful to the national security and foster and nurture separatism and are inconsistent with the Constitution of Sri Lanka.

05. As it is axiomatic that Norway has shown unprecedented bias and partiality towards the LTTE in her role as a facilitator in the negotiation process between the Government of Sri Lanka and the LTTE and in the monitoring mission of the Ceasefire Agreement and also as she has undoubtedly failed to act impartially in performing her obligations, it is agreed hereby to reconsider seriously whether the Norway should be allowed to engage in those activities further and the necessary actions shall be taken accordingly.

06. It is agreed hereby that the re-establishment and restoration of human rights, democracy and law and order which have become completely non-existing phenomena due to the terrorist activities of the LTTE in the North and Eastern provinces shall be considered as a prioritized task and also all the necessary and appropriate actions shall be taken to ensure to all democratic political parties to carry out their political activities without any impediments, to create an atmosphere for the Sinhalese, Tamil and Muslim peoples to live without any fears and perplexity and also to ensure that multi-party political system shall be restored in the said provinces.

09. The harbors, seaports, airports, State commercial banks, the Petroleum Corporation, Ceylon Electricity Board and all other Government establishments and including water and mineral resources which are the nerve centers of the national economy shall not be privatized and also shall agree to abolish any such actions whatsoever taken so far towards privatization of the aforesaid institutions, services and resources.

10. The right to have free education shall be ensured and also any moves towards the privatization of education sector including the “White Paper” presented by the United National Party in 1981 shall be abolished after comprehensive review and carefully considering the views of intellectuals, academics, teachers and students.

11. In resolving the problems faced by workers who contribute to the national production process, and the farmers, factory owners, entrepreneurs, business community and consumers who face hardships in view of soaring inflation, the proposals of the People’s Liberation Front (JVP) shall be accepted and shall agree to act in conformity with that proposals.

12. Sri Lanka shall adopt non-aligned foreign policy and in particular shall be taken into account the regional and the Asian cooperation in revisiting the foreign policy.