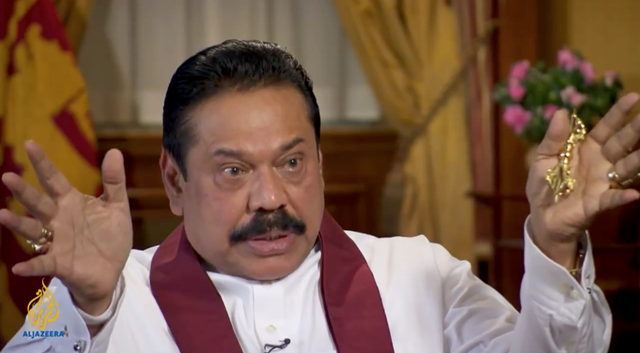 Summarised extracts from the opnion given by prof. Suri Ratnapala (University of Queensland, Australia) to the Bar Association of Sri Lanka on the applicability of the 18th Amendment with regard to the incumbent President seeking a third term:

The question presented for this opinion is whether His Excellency, President Mahinda Rajapaksa is disqualified in Law from seeking election for a third term as the President of the Democratic Socialist Republic of Sri Lanka. On November 17, 2005, His Excellency, Mahinda Rajapaksa was elected President of the Republic. On January 26, 2010, His Excellency, President Rajapaksa was elected to a second term as President. The second election was held before the expiration of the President’s first term of office, as permitted by Article 31 (3) A (a) (i) of the Constitution.
On January 26, 2010, the date of his election for a second term, President Rajapaksa became disqualified from being a candidate at any future election for President. The disqualification resulted from the following provisions of the Constitution. Article 31 (2) – No person who has been twice elected to the office of President by the People shall be qualified thereafter to be elected to such office by the People. Article 92 (c) – Every person who is qualified to be an elector shall be qualified to be elected to the office of the President unless he is subject to any of the following disqualifications … (c) if he has been twice elected to the office of President by the People.

On September 9, 2010, the 18th Amendment to the Constitution came into force. One of the objects of this Amendment was to remove the disqualification of a twice elected President from seeking election to further terms of office as President. The removal of the disqualification was effected by the repeal of Articles 31 (2) and 92 (c) and certain consequential Amendments. There is no doubt that His Excellency, President Mahinda Rajapaksa was disqualified from seeking a third term in the office of President during the period January 26, 2010 to September 9, 2010, when the 18th Amendment became law.

The present question of law is whether this disqualification was removed by the 18th Amendment, so that His Excellency President Rajapaksa is Constitutionally qualified to seek election for a further term of office as President. The answer depends on the further question whether the repeal of Article 31 (2) and Article 92 (c) operates in relation to those who are elected as President in the future or operates in relation to any President elected before or after the enactment of the 18th Amendment.

The condition established by Article 31 (2) and Article 92 (c), was not trivial. It represented an important Constitutional principle and a vital element in the system of checks and balances commonly found in democratic Constitutions that vest executive power in an elected president. It is a condition under which the electorate voted at the 2010 election, in other words, exercised their right of franchise guaranteed by Article 3 of the Constitution. The negation of this condition, therefore, is inconsistent with Article 3. If the 18th Amendment had negated this condition, it could not have been enacted except with the approval of the people at a referendum as required by Article 83.

For the reasons explained herein, in my opinion, any person who has been elected twice to the office of the President of the Democratic Socialist Republic of Sri Lanka before the enactment of the 18th Amendment to the Constitution, is disqualified from being nominated and therefore, from being elected for a further term of office as President.

Original Caption: 18A boomerangs on MR’s attempt at 3rd term in office