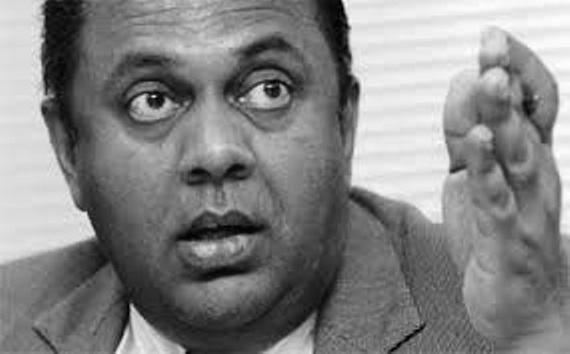 [Mangla Samaraweera, MP]
Sir Desmond De Silva QC, Sir Geoffrey Nice QC and Dr. David Michael Crane were appointed as advisers to the ‘local commission investigating allegations of war crimes by all parties to the conflict’. A regime which categorically rejected all accusations of human rights violations during the war, now seeking the expertise of three of the world’s top war crimes prosecutors was interpreted by some as a 180 degree U-turn to mend its earlier ways and to rebuild its relationship with the international community for the sake of the greater good of our country.

On closer examination of the credentials of the ‘advisers’, however, it is obvious that the motives may not be pristine and altruistic as it may seem at first glance. The role of Sir Desmond de Silva, as an apologist for the excesses of the Rajapaksa regime during the last days of the war is already well documented.

Killing 40,000 Tamils is not a war crime
At the dinner organised by the Association of Professionals of Sri Lankan origin held in April 2012 at The Grange City Hotel, Tower Hill, London to coincide with their Annual General Meeting, Sir Desmond de Silva who was the guest speaker said that killing of 40,000 Tamils by the Sri Lankan security forces to liberate 300,000 Tamils held by the LTTE cannot be called a war crime.

According to the Guardian, Ms. Finucane is quoted as saying:
“It’s a report into which we have had no input, the British government has engineered a suppression of the truth behind the murder of my husband. At every turn it is clear that this report has done exactly what was required – to give the benefit of the doubt to the state, its cabinet and ministers, to the army, to the intelligence services and to itself.

“At every turn, dead witnesses have been blamed and defunct agencies found wanting. Serving personnel and active state departments appear to have been excused.

“The dirt has been swept under the carpet without any serious attempt to lift the lid on what really happened to Pat and so many others.

The lesser known backgrounds of the other two advisers are also important in understanding the real motives of the Presidential proclamation of July 17.

Geoffrey Nice QC, a Professor of Law at Gresham College is an expert on ‘Head of state immunity’ and was contacted by the Gadaffi regime in Libya in its last days to challenge the referral of President Gadaffi to the International Criminal Court (ICC). Sir Geoffrey Nice QC later filed an application with the International Criminal Court on January 30, 2012 asking that the Court grant leave for observations to be made concerning the violation of Saif Gaddafi’s human rights. Nice’s expertise on the head-of-state immunity question has obviously found resonance with the higher echelons of the Rajapaksa Government.

Dr. Crane worked for Guinea’s Dictator
The background of the second expert, Dr. Crane may also be useful in working out the true motives behind the regimes sudden U-turn. Dr. Crane’s role in a war crimes probe commissioned by the military regime in Guinea in 2010 has been widely criticised after it allegedly played down the violence and the regime’s role in the incident.

International media reports said Crane was one of two war crimes specialists who were hired as consultants by Guinea’s former military leader President Moussa Dadis Camara who stands accused by a UN commission of inquiry of responsibility for the September 28, 2009 murder and disappearance of more than 156 civilian protesters in the country’s national soccer stadium. The Crane report places responsibility for the violence on a commander of the elite Guinean presidential guard, accusing the guards of violating orders by President Camara. Crane therefore has experience in saving the ‘skins’ of dictators facing war crimes charges and pinning the blame further down the line on the armed forces.

The background of these two experts give further credence to the rumour doing the rounds in the international grapevine that a senior defence official of the regime has been secretly negotiating for an amnesty for the chain of command. In fact, it cannot be a coincidental that the services of these gentlemen were obtained hot-on-the-heels of the congressional hearing in Washington in early July where legal avenues to prosecute a US citizen of Sri Lankan origin were discussed in detail.

In the face of damning evidence the only way to save the skin of the chain of command would be to pin the blame further down the line on the armed forces and whitewash their leaders. The credentials of de Silva, Nice and Crane are impeccable in this respect, if that is to be their brief.

Unlike the legendary knights in shining armour who spent much of their time rescuing ‘damsels in distress’, the knights of the 21st Century seem to find rescuing dictators in distress more lucrative and profitable.