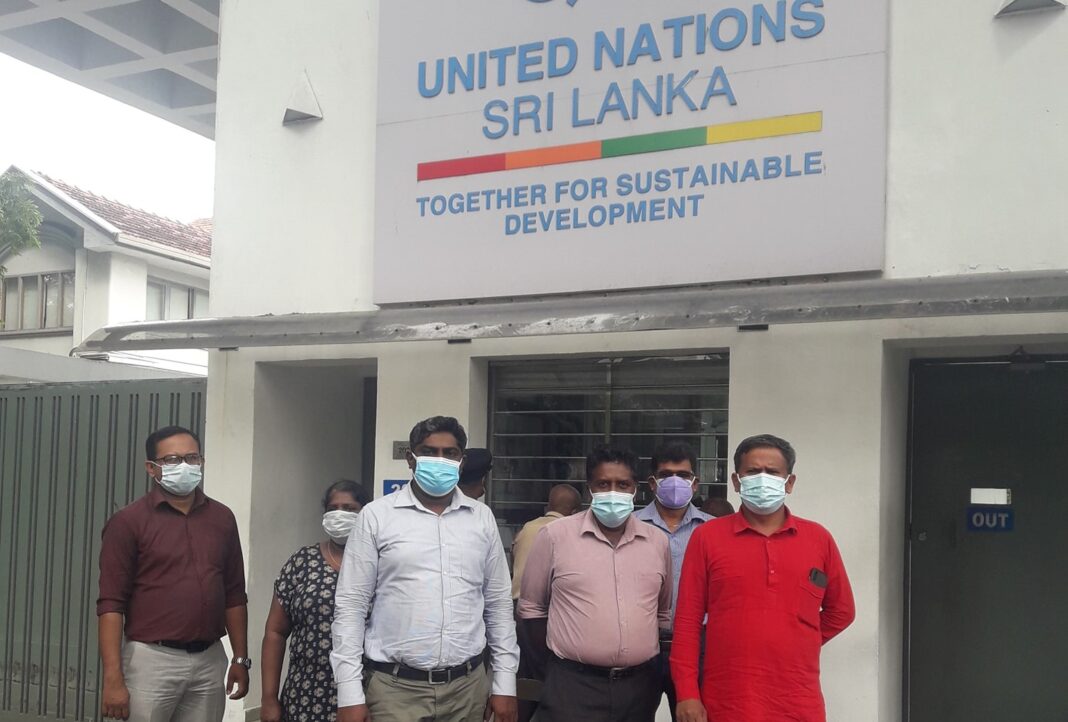 Image: CTU leaders handed over the complaint to UN office in Colombo.

The Ceylon Teachers’ Union (CTU) has submitted a written complaint to the United Nations (UN) High Commissioner for Human Rights Michelle Bachelet about the alleged suppression of peaceful protests that occurred in the country last week and the forced quarantine measures taken by the Police against activists.

CTU General Secretary Joseph Stalin, along with over 31 other activists, were arrested last week during a protest against the controversial General Sir John Kotelawala National Defence University (KNDU) Bill and later granted bail. However, 16 of them were then forcibly led to quarantine centres for 14 days.

This complaint to Bachelet was submitted one day after UN Resident Co-ordinator in Sri Lanka Hanaa Singer-Hamdy said that restrictions imposed to combat the spread of Covid-19 must not unfairly restrict the right to hold peaceful demonstrations.

“Right of assembly includes the right to hold peaceful demonstrations. It helps exercise other rights: Freedom of expression and influence public policies. Vital that restrictions imposed as measures against the pandemic don’t go beyond the legitimate protection of #PublicHealth.”

Bachelet in January alleged there was intimidation of civil society in Sri Lanka, which she termed a worrying trend, along with deepening impunity, increasing militarisation of governmental functions, and ethno-nationalist rhetoric.

In a UN report, she claimed there was accelerating militarisation of civilian governmental functions, reversal of important constitutional safeguards, political obstruction of accountability, exclusionary rhetoric, intimidation of civil society, and the use of anti-terrorism laws.

Meanwhile, six fundamental rights (FR) petitions were filed in the Supreme Court (SC) by the CTU yesterday regarding the arrests made at the protests as well as the forced quarantine of protestors.

“The petitions included our concerns about the right to peaceful protest, the unfair use of quarantine regulations by the Police to suppress activists, and the constitutional right to the freedom of expression,” said Fernando.

The arrests and forced quarantine have been condemned by many parties, including the Samagi Jana Balawegeya (SJB), the country’s main parliamentary Opposition; the Bar Association of Sri Lanka (BASL); and the Lawyers for Social Justice Organisation.

However, Minister of Public Security Rear Admiral Sarath Weerasekara defended the arrests in Parliament last week and vowed to continue similar actions in the future.

“Even in the future, we will arrest anyone who engages in protests or public meetings, and will produce them in court irrespective of their social status.”

However, another protest was held yesterday by the Inter-University Students’ Federation (IUSF) and the Students’ Movement for Free Education at the Lipton Roundabout, demanding the protection of the right to protest, condemning the forced quarantine measures imposed by the State, and against the KDNU Bill due to its threats to free education and the potential militarisation of education. Interestingly, there were no arrests made at this protest.

Meanwhile, the Frontline Socialist Party (FSP) filed a habeas corpus petition yesterday regarding the forced quarantine of protestors involved in both the KDNU and the State Engineering Corporation protests.

“Last week, during a protest about the Engineering Corporation’s delayed payment of salaries to its employees, FSP Propaganda Secretary Duminda Nagamuwa and seven others were arrested and later received bail from the Colombo Fort Magistrate’s Court. However, they were then forcibly taken to quarantine. Similarly, the next day, on 8 July, during a protest against the KDNU, 16 protestors who had received bail were forcibly sent to quarantine.

“The Police are exploiting the Quarantine and Prevention of Diseases Ordinance. There are pictures of the Prime Minister’s relatives attending a festival in Nuwara Eliya a few months ago. Ven. Iththekande Sadhdhatissa Thera’s mother’s funeral was allowed to take place without quarantine regulations. Just a few days ago, pictures of Minister of Trade Bandula Gunawardana attending a function at a Monaragala Sathosa emerged. No measures were taken against them. Why is the law applied unfairly like this?” questioned FSP Education Secretary Pubudu Jayagoda.