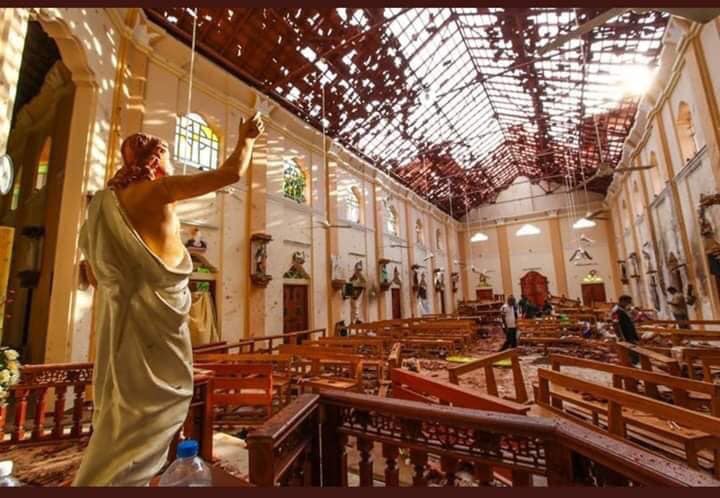 Report of the Select Committee of Parliament to look into and report to Parliament on the Terrorist Attacks that took place in different places in Sri Lanka on 21st April 2019.

On 21 April 2019, Easter Sunday, suicide terrorist bombings that took place in three churches and three hotels in Sri Lanka killed around 277 people (including 8 suicide bombers) and wounded more than 400 people as per the information provided by Police Headquarters. At least 40 foreign nationals and at least 45 children were reported to be among the dead. Investigators identified Zahran Hashim, one-time leader of the National Thowheed Jamaath, as the main suspect behind the execution of these co-ordinated attacks. Subsequent to the attacks, incidents of ethnic violence and tension targeting the Muslim
community occurred in several parts of the country.

The PSC held 24 sittings from May to October 2019 and heard evidence from 55 persons. The present report is endorsed by all members of the PSC.
The PSC makes several findings and recommendations in the report. Below are key findings:

Following the attacks, evidence emerged that prior intelligence information was available regarding the impending attack but that it was not acted upon. The PSC notes that intelligence information related to the attacks was first received by the Director, SIS on 4th April 2019 but there were delays from his end to share it with the relevant intelligence and security personnel. The Director, SIS was called by name by the then Secretary MOD to brief the ICM on 9th April 2019 but failed to do this by saying he would  Report of the Select Committee of Parliament to look into and report to Parliament on the Terrorist Attacks that took place in different places in Sri Lanka on 21st April 2019 send a written update on the intelligence received.

This, the PSC notes is a major failure from the Director SIS, the lead in the intelligence apparatus who had received pride of place at the ICM and NSC. The PSC also notes the failure on the part of the SIS to act up on the subsequent intelligence information received after the explosion on 16th April 2019 in Kattankudy. The PSC notes that the Director SIS bears the greatest responsibility. This is compounded by the fact that since 8th April 2018, a full one year before the incident, he had in writing to the IGP requested for the shutting down of investigations by others into Zahran, which resulted in the SIS becoming the sole investigator into Zahran.

PSC also observes that the SIS missed a series of events that should have alerted the state security apparatus to the impending attacks and demonstrated to them the importance of the intelligence information received. This was in the context of intelligence already known on Zahran and his allies including police reports on him and arrest warrants issued on him dated March 2017. Other incidents since 2018 (described in detail in the findings) demonstrate
how the lead intelligence party should have been more vigilant and taken steps to keep the ICM, NSC and other relevant parties informed. This failure by the SIS has resulted in hundreds of deaths, many more injured and immeasurable devastation to Sri Lanka and Sri Lankans and that must not be treated lightly.

The PSC makes this observation considering attempts made to shield the culpability of key individuals and the need to hold all individuals responsible without further delay.

The PSC further notes, that whilst the greatest responsibility remains with the Director SIS, others too failed in their duties. Within the security and intelligence apparatus, the Secretary MOD, IGP, CNI and DMI failed in Report of the Select Committee of Parliament to look into and report to Parliament on the Terrorist Attacks that took place in different places in Sri Lanka on 21st April 2019 their responsibilities. All were informed of the intelligence
information prior to the Easter Sunday attacks but failed to take necessary steps to mitigate or prevent it.

The PSC makes a very serious finding in terms of the status of the state intelligence apparatus, where intelligence information known to a few was not shared
with relevant parties. The PSC also observes that further investigations will be needed to understand whether those with vested interests did not act on intelligence so as to create chaos and instil fear and uncertainty in the country in the lead up to the Presidential Election to be held later in the year. Such a situation would then lead to the call for a change of regime to contain such acts of terrorism.

Coincidentally or not so coincidentally, the security situation and fear would be unleashed months away from the Presidential Election. The PSC also notes that this occurred in the context of changes in the leadership in the Sri Lankan Army and DMI in 2019. These are extremely serious observations that can impact the democratic governance, electoral processes and security of Sri Lanka and must require urgent attention.

In addition, the PSC observes that the President failed in numerous occasions to give leadership and also actively undermined government and systems including having adhoc NSC meetings and leaving out key individuals from meetings. Whilst the fissures in Government were evident in 2018, amplified with the Constitutional Crisis, these also impacted the security apparatus. Several others are listed in the report as having failed in their duties including the
Prime Minister and State Minister for Defence and the Attorney General’s Department.

An important finding of the PSC is the need for structural and legislative reform which are discussed in Report of the Select Committee of Parliament to look into and report to Parliament on the Terrorist Attacks that took place in different places in Sri Lanka on 21st April 2019 detail in the report. A critical introduction would be an independent and robust National Security Council with a National Security Advisor, essential in addressing evolving
security challenges. The PSC also highlights the need for legislative reforms in several areas such as initiatives to counter fake news and responsible reporting, work in the education sector, the need for greater Parliament oversight, among others.

The PSC also makes note of the rising extremism in Sri Lanka. Evidence received by the PSC indicates that Zahran started a campaign to radicalise Muslim youth and motivate them to use violence to achieve their ends post March 2018 attacks on Muslims in Digana. However, investigations to date have not shown any evidence that Zahran had direct links with the ISIS.

PSC observes that several people of Kattankudy and several local Muslim groups made complaints against Zahran as early as 2013/2014 to the authorities. Testimony also showed that investigations had commenced into some of his speeches and activities. The rise in extremism was also in the backdrop of increasing levels of Islamaphobia.

The PSC also observes increasing levels of Wahabism and Arabization in parts of Sri Lanka in recent years. A physical change had taken place in recent years in Kattankudy town with the emergence of Date-Palm Trees and Arabic lettering on public sign boards. The Batticaloa campus buildings also prominently display Arabic architecture and landscape, making it drastically different to any university building in the country.

Evidence received by the PSC indicates that Arabization commenced and was fostered in Kattankudy by Hon. M.L.A.M. Hizbullah. The PSC notes that the spread of Wahhabism and the Arabization of Kattankudy contributed to the growth of extremism in the  Report of the Select Committee of Parliament to look into and report to Parliament on the Terrorist Attacks that took place in different places in Sri Lanka on 21st April 2019 Islamic community especially in the East and must be further investigated.

The PSC also notes that several politicians made comments subsequent to the Easter Sunday attacks which were inflammatory and irresponsible. The PSC notes that speeches that incite hate and racism, by politicians, religious leaders and others, are extremely dangerous and must be independently investigated and individuals held to account. Inaction will only exacerbate the impunity and contribute to further hate and fear in Sri Lanka.

1. Essential reforms in the security and intelligence sector

3. The need to control and monitor the rise of religious extremism

5. Wahabism and the need for action 6. Media reporting, fake news and other areas of concern

Read the full report as a pdf here: sc-april-attacks-report-en or online here