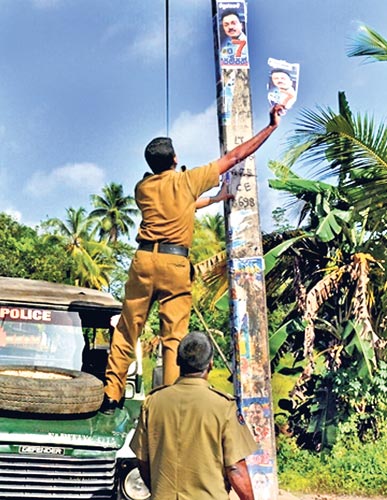 The Human Rights Commission of Sri Lanka, recognizing the right of every citizen to vote, to freely engage in political activities and the right to free and fair elections under the Constitution of Sri Lanka (1978) and international human rights norms, adopted the following guidelines to be observed by all police officers during the run-up to the election, on the day of the election and the period immediately after the election:

(a) Complaints regarding pre-election, Election Day and post-election violence shall be accepted and investigated in terms of Article 12 of the Constitution, which declares that “all persons are equal before the law and are entitled to the equal protection of the law”. The police will be held liable for violation of fundamental rights for any inaction or omission with regard to entertaining such complaints.

(b) Investigation regarding complaints shall be conducted in a strictly impartial manner. Inaction due to political influences or any other unacceptable reason will amount to a breach of Article 12 of the Constitution.

(c) The law which relates to election propaganda shall be applied equally. All political parties and groups shall be treated equally according to Article 12(2) of the Constitution, which declares “No citizen shall be discriminated against on the grounds of race, religion, language, cast sex, political opinion, and place of birth or any one of such grounds. Any unequal treatment or discrimination, especially on political opinion, will be an express violation of Article 12 of the Constitution.

(d) Issuing permits to use loudspeakers and for election meeting shall be in accordance to the law, especially in terms of section 68(2) of the Parliamentary Elections Act No. 1 of 1981. The non-fulfilment of this obligation will result in violation of Article 12 of the Constitution.

(e) Parades during the election period shall be permitted according to the law. Issuing permits for parades shall be according to Articles 12 and 14. Article 14(1) guarantees, among others, freedom of speech, assembly, association, occupation and of movement.

(f) Display of leaflets, posters, and photographs of the candidates, symbols, flags and banners shall be permitted according to election laws. If any party or a group is given privileged treatment, it will be a violation of Article 12 of the Constitution.

(g) The Police shall strictly enforce the law with regard to persons who violate the right of others to vote. If this were not implemented, it would be a violation of Articles 12 and 14 (1) of the Constitution.

(h) Police officers shall provide adequate security to polling centres and other related places and make every effort to facilitate the conduct of a free and fair election in accordance with the law of the land.

(i) The law shall be equally enforced against political parties or persons irrespective of their status or powers when the breach election laws.  Thus it shall be the duty of the police officers to enforce the law strictly against all persons who misuse or cause damage to public property, eg., government vehicles, buildings and premises.

(j) Police have a responsibility to prevent election related violence including post-election violence.  According to past experience, political power is used to commit such acts of violence, which result in violation of fundamental rights.  Police shall take all responsible steps according to procedures established by the law to prevent violation of fundamental rights.

(k) The police shall not participate any type of violence against persons or property, including subjecting persons to torture, cruel, inhuman and degrading treatment or punishment, on their own initiative or at the behest of any other party.

Apart from the above issuing of the said guidelines, the Human Rights Commission of Sri Lanka wishes to have a special meeting scheduled to be held on 11th September 2013 at 10.30 a.m. with the relevant state authorities such as Ministry of Defence, Ministry of Law and Order, Ministry of Public Administration and Home Affairs, District Secretaries, District Assistant Commissioners of Elections, Senior Deputy Inspector Generals of Police of Central, Northern and North Western Provinces to discuss the importance of the rights to engage in political activities and the right to free and fair elections under the Constitution of Sri Lanka and the role of state responsibility. The Human Rights Commission will be monitoring the developments of the proceedings thereafter.
HRCSL