Pros and Cons of South African TRC initiative in Sri Lanka: A long way to go 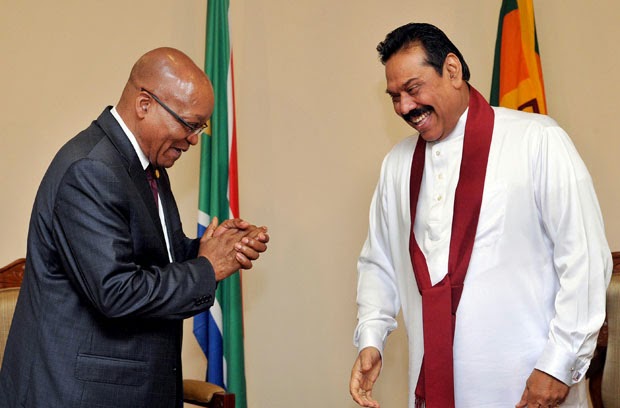 Other than the circumstantial value for the UPFA Government, the South African initiative, if they are serious enough, would come as a very important challenge. It has to determine the future of the now virtually defunct Parliamentary Select Committee tasked to formulate a new political package to address Tamil grievances. Such a package, the terms of reference of the PSC, made clear, could even replace provisions in the 13th Amendment to the Constitution.

Be that as it may, India which abstained from voting at last month’s Human Rights Council sessions reiterated that the Government should fully implement the 13th Amendment and go beyond it. All this only means that the South Africa special envoy would have to tread cautiously to identify common ground before a formula for a formal dialogue is evolved. That is no easy task and would be time consuming. And that is what is in the UPFA Government’s favour in the light of the upcoming Human Rights Council’s international investigation.
Even temporarily, if the South African initiative is a best case scenario for the UPFA Government, many an obstacle remains to be cleared. The worst could come when the process, which would no doubt be long drawn, gets under way and some of the core issues come into focus. An insight into how that would play out emerged from talks the TNA delegation held with Ramaphosa. Besides Sampanthan who led the team, others were Suresh Premachandran, Selvan Adaikalanathan and M.A. Sumanthiran. They were in Pretoria from April 10 to 12. The delegation also met International Relations and Co-operation Minister Maite Nkoama Mashabane and her deputy, Ebrahim Ebrahim.
The South African initiative, Sampanthan said, “must be constructive, holistic and provide comprehensive support to the resolution of the national question. We would extend our fullest support to such an initiative.” During the lengthy discourse with Ramaphosa, he said the TNA discussed the “root cause” of the conflict, “the compulsive need for a reasonable and acceptable political solution as a foundation for genuine reconciliation.” He said they stressed the “need to address accountability and ascertain the truth as a pre-requisite to reconciliation.” This, he pointed out, was with the “need to terminate and reverse the aggressive action by the Government and the Armed Forces particularly in relation to land so far as to change the demographic composition of the Northern and Eastern Provinces.” Other matters included linguistic and cultural identities of those areas. “We are unreservedly committed to the evolution of a political solution within a united undivided Sri Lanka,” he added.

From the political column of The Sunday Times