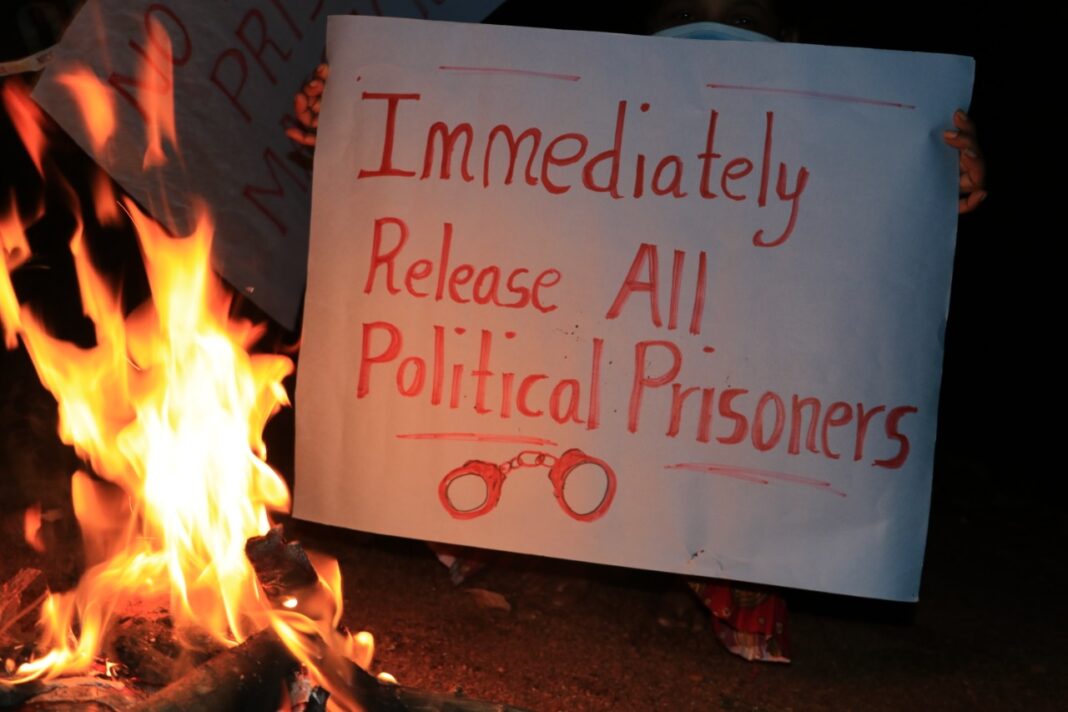 Mr. Nadesu Kuganathan surrendered to the army in the last phase of the war  in 2009 and released after rehabilitation in 2013 after four years. But after three months, he was re-arrested under the Prevention of Terrorism Act (PTA). Last week he was released again after eight years in detention without any charges.

Mr. Malcom Tiron[i] was arrested under the PTA in 2008 and he was released few months ago due to lack of evidence after 13 years in detention. He was charged in 2012 along with another accused but due to death of the other accused, the trial was subjected to long delays. The submission of a death certificate of the accused who died took more than two years and amendment of charges took two more years. Delays were also caused by the absence of police and witnesses on some days court hearings were scheduled. The trial has been presided by nine High Court judges as of December 2020.

Mr. Chandrabose Selvachandran was charged and acquitted as not guilty in 2019 about 13 to 14 years after his arrest. He was single and 27 years when he was arrested. A second indictment against him was for an incident that had happened when he was in detention. He was a cancer patient and died one and half years after his release.

Mrs. Vasanthi Ragupathy Sharma was arrested in December 1999, charged and acquitted as not guilty in 2015, after more than 15 years in detention.

Mrs. Anthony Chandra was arrested in 2008, charged and acquitted as not guilty in 2015 after seven years in detention.

Mr. Ramesh was arrested in December 2008 when he was just 18 years old and released in October 2011. In April 2012 he was re-arrested and charges were brought against him 17 months after his arrest. In February 2015 he was released unconditionally due to lack of evidence. In total, he had been in detention for five years and 8 months.

Ms. Angela Croos[ii] was 25 years old when she was arrested in August 2009 and was released after one and half years in March 2011. No charges have been filed against her. She was denied health care in detention and was given access to doctors only after her father obtained a Supreme Court directive. Her health deteriorated rapidly while in detention and she passed away in October 2012.

Mr. Solomon Caspers Paul and Mr. Muralitharan Raja[iii] were arrested in May 2008, charges were filed against them and they were acquitted as not guilty in February and December 2011.

Mr. Nandakumar and Mr. Chitrakumar[iv] were arrested in April 2008 and released in August 2010 without any charges being filed.

Mrs. Sharma and Mrs. Chandra, detained for 15 and 7 years, have three children. Mr. Nadesu and Mr. Tiron who had been detained for 12 to 13 years also have three and two children respectively. The social, economic and emotional difficulties young children would have faced, including the stigma of being children of “terrorist suspects” is unimaginable. The release as not guilty would have come far too late to mitigate this. Mr. Paul’s child was born while he was in detention and did not recognized him as the father after his release.

“There are people in detention for as long as 18 to 19 years under the PTA without having their cases concluded and, in some cases, charges were not filed for 15 years.”

Many of the detainees reported having being subjected to torture. Confessions obtained with torture or threats of torture were used as primary evidence against most of those who had charges filed against them and different courts have refused to accept such confessions.

Successive governments have done very little to prevent or even do damage control to address the agony and pain of innocents detained under the PTA, their children, parents, brothers and sisters. There has been no formal acknowledgement by any government or of survivors and their families being offered apologies, compensation, livelihood support, counselling and medical care. No one is held accountable for these grave injustices. With some exceptions, media, religious leaders, professionals and society in general have been complicit in these tragedies, sometimes by justifying, sometimes by covering up and sometimes by silence.

Article 13 (5) of the constitution guarantees that every person is innocent until proven guilty but these people named and their families have been severely punished with up to 15 years in detention without being proven guilty by a court. There must be many others like the 11 who have been mentioned.

Most alarmingly, this tragedy is likely to continue. According to a list seen in July this year, 29 people have been in detention for 8 to 15 years under the PTA without having their trials concluded. This excludes Nadesu and Malcom. Some of the 29 could well be judged not guilty by courts.

The Bail Act No. 2 of 1997 states that bail must be granted as the rule and not the exception but the PTA takes away judicial discretion to give bail. However, the PTA provides that detainees can be released on bail if the Attorney General (AG) consents; this process must be used more regularly if we are to prevent ruining the lives of many others. The AG can also expedite the filing of indictments and conclusion of trials.

September was a busy month for the President, Prime Minister, Foreign Minister and others concerned with engaging with the UN and European Union (EU). The UN Human Rights Council sessions are taking place in Geneva and the UN General Assembly in New York. The EU – Sri Lanka Human Rights Dialogue and a monitoring mission from the EU related to extension or withdrawal of the GSP+ benefits that is based on adherence to 27 international covenants including the International Covenant on Civil and Political Rights (ICCPR) and advancements on human rights will commence this week.

It is likely that recent pronouncements by the government to reform the PTA and release some PTA detainees is to appease international concerns. We hope UN and EU officials will challenge empty rhetoric and demand time bound commitments to repeal (not reform) the PTA and fast release of those subjected to prolonged and unjust detention under this draconian law.

They must also insist on human rights of all people especially ethnic, religious and sexual minorities, vulnerable groups like prisoners and workers and dissenters including student activists, trade unionists, journalists, human rights defenders and families of disappeared. The EU must insist on trade benefits alongside human rights without trading one off for the other.

But it is a sad indictment on a government if steps to protect rights of persons in the country are driven by international concerns. Ultimately the government must repeal the PTA and release detainees held for prolonged periods, at least on bail, and expedite trials not to appease international bodies but because it is Sri Lankan citizens like those described who have suffered immensely from the PTA and it is Sri Lankans who will continue to suffer.

[i] Letter of September 4, 2021 from the Committee for Protecting Rights of Prisoners (CPRP) to the United Nations High Commissioner for Human Rights