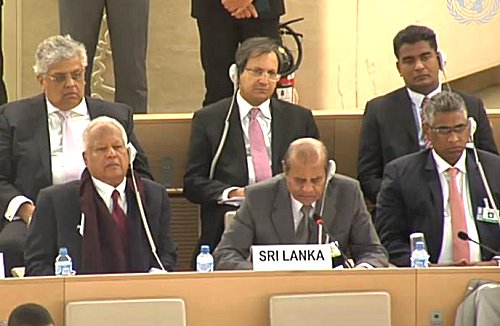 Image: Sri Lanka delegation at the 37 session of the UNHRC. Minister Amunugana at the left.

According to  newsradio.lk Minister Amunugama has said that as next year marks a decade since the end of the conflict adding it is unnecessary to attend the session annually and submit reports as respondents.

The Minister noted 10 years have passed and measures have been taken to overhaul the judicial system, reports newsradio.lk.

Minister  Amunugama  has said that the government must boycott the next year’s regular session of the United Nations Human Rights Council in Genève.

Speaking at a media briefing held in Colombo today, Minister Amunugama has said the government has ensured an independent judicial system in the country and therefore called for an end to international pressure on Sri Lanka to address allegations of human rights violations during the conflict with the LTTE

Political observers in Colombo of the opinion that Minister Amunugama would not have made such a statement without president Sirisena’a consent.  On several occasions Sirisena has disassociated himself form the resolutions cosponsored by his government at the 30th and 34th sessions of the UNHRC.