Presidential coup that will send the Sri Lanka into darkness 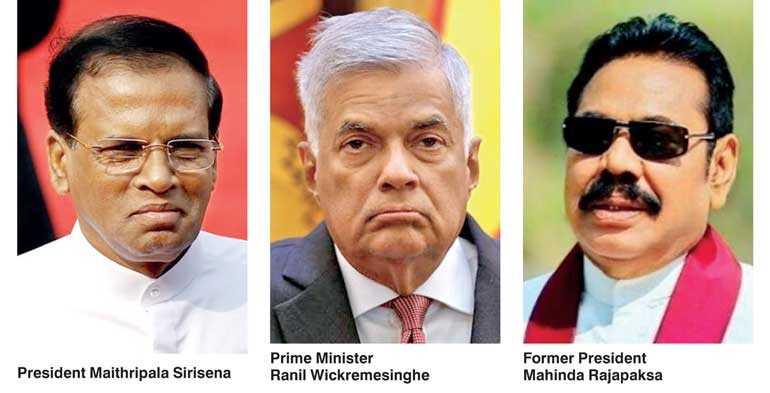 By an activist of the 2015 social media group.

‘So Sri Lanka,’ you are back to square one!

In most countries when politicians fail, we see military coups; however in Sri Lanka, for the very first time, we are witnessing a presidential coup against the Legislature from a man who said to the people that he was not power hungry and was committed to reforms to build a more democratic nation.

Friday 26 October saw for the very first time the real dictatorial power of the executive president being executed, most probably masterminded by the two Rajapaksa brothers holding US citizenship.

The unlawful power grab from the Legislature saw all characteristic of a military coup, but this time led by the President of the country. The immediate action taken to use thugs of Podu Jana Peramuna to take over the national TV stations and Lake House speaks aloud as to who was behind them, as the President being the Minister in charge of the armed forces and national security allowed such actions within hours of giving oaths to a Prime Minister the country had not voted for.

Without batting an eye, the President led this coup, trying in his attempt to stay in power after 2019, using even the devil to do so. His story of the assassination plot indirectly linking India and Field Marshal Sarath Fonseka, together with Gotabaya Rajapaksa, shows the master plan behind this whole coup. This story was built to convince the people that he did the right thing to bring the Rajapaksas back to power.

Simply, if he was not satisfied with the actions taken by the Wickremesinghe-led Government on investigations, instead of bringing the very same man and his family whom he accused of being behind the plot to kill him in 2014, he should have taken Police powers and the Ministry under him and investigated the said plot and attempt on his life.

This whole drama looking at the actors is showing a clear plan of the Rajapaksas to get into power to avoid the exposure of themselves and the corruption as the country steps into next year with elections all year round.

The Budget was around the corner, and if Sirisena had any genuine intentions to topple the Government democratically and to stab the very same people who brought him into power, the ideal platform would have been to defeat the Budget, which is a democratic means to do so.

The funny but serious part of this whole episode is that Sirisena is now exposed not only to the country but to the whole world, that he was the force behind obstructing the justice being done against the corrupt Rajapaksa regime. If not, no one with any senses could imagine in anyway how he could bring the alleged murderers and rogues back into power to form a government with him. The arrogance and the illegality of Sirisena is more visible as he chose to engage in this coup on a Friday evening even without informing the coalition partner in Parliament but pulling the rug to give the surprise element.

If he was a decent man, who was never destined to be the President of this country, he should have had the courtesy to inform the UNF, which included many smaller minority parties, that the UPFA was withdrawing from Government. With the existing Prime Minister still not being aware and being out of Colombo, he installs another Prime Minister at 7 o’clock in the evening, and then informs the existing Prime Minister at 10 o’clock in the night that he is removed. The removal should have been the first step if he was genuine in his business.

As citizens we must understand that this is a politically-failed coup that will sustain short-term happiness for a few, but it will create havoc not just for days, but for years to come, as the very same man who came to power promising a new governance system has led the nation and its people into a new political culture. There is no doubt that it is thugs and murderers who have taken over and that the country will have a huge cost for this blunder and the coup executed by the President on its own people.

Sri Lankans will have to dearly pay for this once again. It is very clear by the statements made by the US, EU and UK that our relationship with the West will once again be at odds as human rights and constitutional behaviour had been highlighted in their media releases and obviously the Rajapaksas will not stand qualified to deliver them.

Last time we averted major economic sanctions due to a change of government. However, this miserably failed coup of the President which is exposed to any man with common sense will lead to further economic chaos.

No doubt young people and intellectuals will keep on leaving the country. Certainly, investments and tourism will be affected. Probably all macroeconomic and the critically-important reforms will come to a halt as patriotism and the war are bound to come upfront to win elections in the upcoming months. People like Wimal Weerawansa will be the stars to start the rhetoric against the West and India.

Certainly, Sri Lanka is back to square one. President Sirisena will be in history books as a traitor who betrayed his own words and the countrymen of Sri Lanka, and probably the first executive president to lead a coup, using J.R. Jayewardene’s still-alive executive powers. A word of caution to our sugar daddies in the West – since these countries never helped Sri Lanka to get out of its financial mess created by the Rajapaksas by 2015, they will now have to look at a strategic location of the Indian Ocean slowly but steadily being entangled in Chinese hands. God bless Mother Lanka!

If one recalls, we wrote an article with our opinion on 3 April with the caption ‘Sri Lanka is plunging into a pit of snakes and darkness’ (http://www.ft.lk/opinion/Sri-Lanka-is-plunging-into-a-pit-of-snakes-and-darkness/14-652570).

Fellow citizens, sadly we have now fallen into that pit and darkness; as an activist group for 2015 we hope Lasantha Wickrematunge, Thajudeen and Eknaligoda are allowed to rest in peace without digging up their bodies for political purposes alone by a President who betrayed 6.2 million voters.