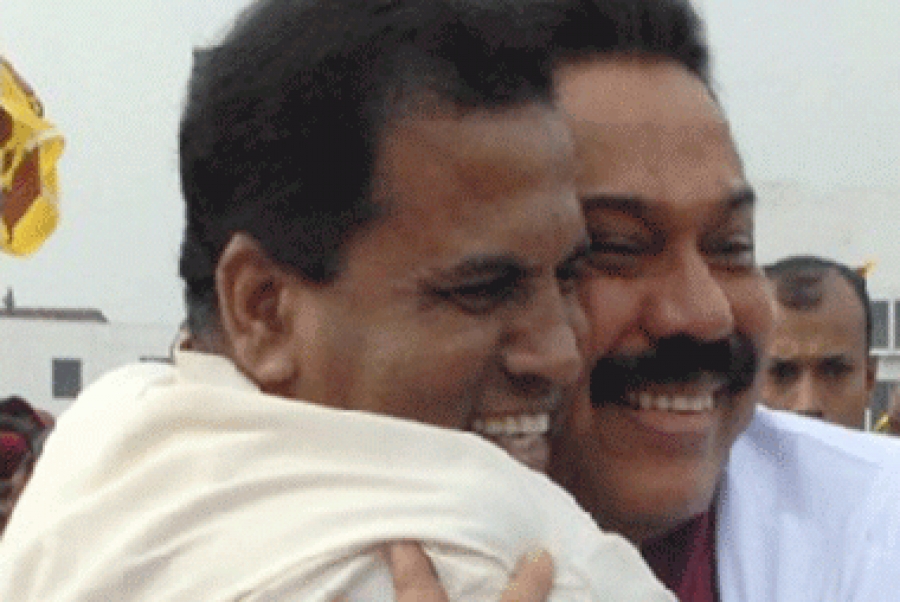 Threatens to act against Commission, FCID and CID if they pursue political agendas.
Says he is not being kept in the loop about high profile arrests and prosecutions.
Demands ‘release or prosecution’ of military intel officials in police custody.

President Maithripala Sirisena slammed the Bribery Commission and two Police divisions for what he called their “hauling” of the former defence secretary and naval commanders to court earlier this month.

In a shocking outburst that laid bare a widening chasm between the Head of State and other Government agencies and political actors within the ruling coalition, President Sirisena charged that the Bribery Commission, the CID and the FCID were working to a political agenda.

Military commanders who had executed the war and the former Defence Secretary had been “hauled” into court by the Bribery Commission last week, the President said, speaking at a function to present land and houses to military personnel at the Sri Lanka Foundation Institute yesterday.

“I am expressing my disgust at this turn of events. Three navy commanders who served during the war and the former Defence Secretary were hauled into court,” the President charged during his speech.

The goal of establishing independent commissions was to restore freedom and democracy, protect democracy and to build a corruption-free country, President Sirisena said. “These commissions cannot carry out political agendas. They must understand their remit,” the enraged President added.

“As Defence Minister and President, I am disgusted,” he charged. President Sirisena asserted that if there were issues regarding Avant Garde and the Defence Ministry, there was a particular process by which to conduct the investigation.

President Sirisena also expressed outrage that he was not kept in the loop about these cases and the decisions to summon ex-commanders to court by senior officials of the Commission and the police divisions.

“I am the President and the Defence Minister, the heads of these agencies have a duty to keep me informed,” he charged.

The President also criticised the continued incarceration of several military intelligence personnel with regard to what he called a famous ongoing case. The officials had been held in custody for 16 months now. “Either prosecute them or release them,” he demanded, referring to the suspects in a high profile disappearance case.

He had made several inquiries about the military intelligence officials in custody, from the police, President Sirisena noted.

“I will never allow the military to be weakened,” he asserted during the fiery speech.

He charged that all these moves were being plotted by “people sitting in corners and discussing matters”.

“So far, I have not expressed these views publicly. But soon I will also be compelled to take action publicly,” President Sirisena warned.

He said a special discussion had been held with the Prime Minister and the Cabinet of Ministers.

“I informed them that if the CID, FCID and Bribery Commission were going to act upon political agendas, then I will be compelled to take action. That is not their role,” President Sirisena charged.

Former Defence Secretary Gotabaya Rajapaksa and eight others were notified to appear in court earlier this month, in a case filed by the Bribery Commission, which claimed the Government had lost Rs. 11.5 billion in revenue as a result of the decision to permit the controversial private security firm Avant Garde to run a floating armoury.

The former Defence Secretary, arguably the most powerful member of the defeated Rajapaksa regime, was granted bail by the Colombo Chief Magistrate after briefly spending time in a court detention cell.

The President’s outburst comes amid speculation in political circles that the former Defence Secretary is regularly in touch with President Sirisena.