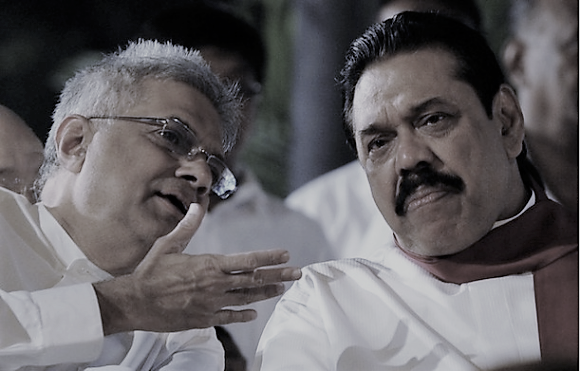 Image: Shall we finish Sirisena? is that what Ranil asking?

Cabinet meeting bombshell exposes widening crack in National Unity Government; SLFP and UNP at crossroads amid reports of PC polls this year Sirisena wants to bring the Rajapaksas to book; but questions about how far he could go; Police say some important arrests are on the cards

The first real sign that the two and half year old coalition — once dubbed harmoniously as the ‘National Unity Government’ — is cracking emerged last Tuesday.It surfaced at the weekly Cabinet meeting at the Presidential Secretariat. In a no-holds-barred speech, an angry President Maithripala Sirisena did not mince his words. He pointedly accused his partner in governance, the United National Party (UNP), of stalling investigations into allegations of bribery, corruption and other acts of fraud allegedly committed by former President Mahinda Rajapaksa, his family members, close associates and top officials. Mama dannawa mewa patharawala pala wei kiyala. Ekata kamak nehe (I know this will appear in the newspapers. That does not matter), he asserted.

Sirisena, who is also leader of the Sri Lanka Freedom Party (SLFP), declared that if he were given the Police and the Attorney General’s Department, he would have produced results within three months (finding previous Government leaders who are guilty of bribery and corruption). Those remarks were clearly a lament that those two subjects were assigned to UNP ministers and he had no direct role. But that remark did raise many issues. Within hours of Sirisena’s admonishment, what he said became the talking point among both the SLFP and the UNP, particularly their respective parliamentarians. Apart from the bouquets and brickbats, questions were also being posed on whether Sirisena himself is under tremendous pressure or feels cornered under various mounting issues.

The occasion for his verbal assault on the UNP, almost putting it on notice, arose from a rather non-committal ‘Note to Cabinet’ which Prime Minister Ranil Wickremesinghe presented. He sought “an appropriate decision” by his ministerial colleagues on the future of the Anti-Corruption Committee Secretariat (ACCS) whose term ended on June 30. More on the ACCS later.
First to Premier Wickremesinghe’s note dated June 27, 2017.

Titled the “Continuation of the Anti-Corruption Secretariat,” the note said:

“The Anti-Corruption Committee Secretariat (ACCS) was established on 20.2.2015 by Cabinet decision no. 15/066/602/002-1 dated 11.02.2015 to accept complaints regarding serious frauds and corruption and to facilitate the related investigations.

“ACCS was established to service the Cabinet-Sub Committee on Anti-Corruption. Further, the ACCS has been forwarding the complaints received by them to the agencies such as Police/Financial Crimes Investigation Division, Commission to Investigate Allegations of Bribery or Corruption etc.

“Now that the Financial Crimes Investigation Division of Police is fully functional, a decision has to be taken on the future operations of the ACCS be continued or not. “Submitted for an appropriate decision by the Cabinet of Ministers.”

This note came up for discussion when ministers had finished most items listed on the day’s agenda. Speaking in Sinhala, President Sirisena asked what the purpose was in extending the tenure of ACCS. What has it done? he asked. Wickremesinghe was to respond saying it had been functioning as a ‘post office’ channelling public complaints it received to the relevant state investigative agencies.

Understanding with the Rajapaksas

Sirisena was visibly angry. As he spoke, one source at the meeting said, he looked in the face of some UNP ministers including Premier Wickremesinghe. He said if Mahinda Rajapaksa came back to power, none of the UNPers was going to be touched. “You have an understanding with Rajapaksa’s people.” Recently the former President said that if he were to come to power again, he would not give up. He would continue to govern. There has been no cases against Mahinda Rajapaksa or members of his family. Even the ones that are probed or action taken are watered-down versions. This was because those in the UNP had brought pressure on the investigators periodically to slow down or not to proceed. The thoughts Sisirsena had been entertaining privately finally came out in the open.

Sirisena lamented that it was only persons who have been identified with him who were being dealt with. One was State Minister A.H. M. Fowzie for misusing a vehicle (that was donated by a foreign government for tsunami related work). The other was former Aviation Minister Priyankara Jayaratne who has been accused of providing a job in his Ministry to his own daughter. These were the “small” cases they were going after, Sirisena said.

It is pertinent to note that the cases against Fowzie and Jayaratne were filed by the Commission to Investigate Allegations of Bribery or Corruption (CIABOC) after complaints were made directly to it. What about the Rajapaksas or others associated with them? asked Sirisena. At this stage Premier Wickremesinghe intervened to say 76 files had been sent to the Attorney General’s Department after the State’s investigative arms — the Criminal Investigation Department and the Financial Crimes Investigation Division mostly — had concluded their probes.

Sirisena replied that senior Police officers who were linked to the investigations had met him and confessed they could not proceed with probes into Rajapaksa and his associates because there was a “lot of pressure from the top.” A somewhat irritated Prime Minister Wickremesinghe asked President Sirisena to name the persons who had interfered but the President did not respond. The President named Gamini Senarath, the former Chief of Staff of President Rajapaksa as one of those against whom investigations have been virtually stalled. Elaborating on what he said about the Attorney General’s Department, Sirisena pointed out to the case that is going on now against Lalith Weeratunga, former Presidential Secretary, for procuring sil cloth with monies from the Telecom Regulatory Commission, as an example. He said Weeratunga had said in his statement that he carried out the act on the instructions of the then President Rajapaksa. Yet, he noted that the AG’s Department had failed to initiate action to question Rajapaksa on his response to Weeratunga’s statement.

In what was clearly an assertion to elaborate on a nexus between the UNP and the Rajapaksas, Sirisena referred to an incident on January 9, 2015 when the results of the presidential election were declared. He said Minister Malik Samarawickrema (also Chairman of the UNP) and the Prime Minister had together arranged for an Air Force helicopter for Rajapaksa and his immediate family to fly from the Army Grounds to their ancestral home in Medamulana. Though he named Samarawickrema, he only referred to Wickremesinghe as Prime Minister. Sirisena asked what would have happened to him if he lost the presidential election.
The Sunday Times