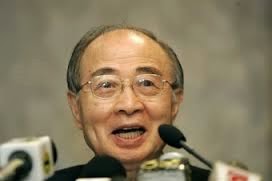 Visiting Japanese special envoy Yasushi Akashi said today that it was not only the International Community but also Sri Lankans who are anxiously “waiting for action and not just sound and fury”.
Responding to a question on corruption, good governance, the adherence to the rule of law and the Government’s commitment to all stakeholders including the International Community to address these concerns, Mr. Akashi said the Government should not repeat such failures on its commitments.

“There is a certain amount of impatience and frustration on these matters and there is a notion that the Sri Lankan Government has taken too much time appointing commissions and then shelving their reports without taking any action. I hope the government of Sri Lanka is reflecting upon these past repetitions. I think time has come for action and I hope that kind action is needed, the implementation of the LLRC report is a good testing case of real action, it’s the people in Sri Lanka not those in other countries are anxiously waiting for action and not just sound and fury,” he said.

Mr. Akashi said matters of good governance were raised during his meetings with Government officials including the President.

He told a news conference at the end of his visit to Sri Lanka that the Lankan government must eliminate the ‘credibility gap’ with regard to the perception and reality regarding the implementation of proposals for reconciliation.

He said though much has been done by the Sri Lankan Government in terms of reconciliation and the National Action Plan based on the LLRC recommendations a gap exists in the perception between the wishes of the International Community and the reality.

Mr. Akashi said the Japanese Government is working closely with the United Nations Human Rights Commissioners Officer and that he had discussed several methods through which the relationship between the UNHRC and the Sri Lankan Government could be strengthened.

He said though the Japanese government did not believe in interfering in the decisions taken by a country, the Sri Lankan Government should be ready and willing to listen to the international community.

“A pre requisite is the willingness of the Sri Lankan Government to listen to the concerns of the International Community and the Human Rights Council which represent the International Community” Mr. Akashi said and commended the efforts taken by the Government with regard to demining, resettlement and rehabilitation of ex-LTTE cadres and expressed hope that the National Action Plan would be implemented.

“Presidential secretary Lalith Weerathunge will be going to Geneva in January to apprise the council of the work done and I think it’s a good exercise. If it has to be someone it is him who could do it and I have full faith in what he is doing” he said.

When questioned as to if the government of Japan concurs with the views expressed by the UN Human Rights Chief Navi Pillay who said that the Lankan government was moving towards an ‘ authoritarian direction’, Akashi was evasive.

I have no right to give my interpretation as to what the UN human Rights Commissioner said several weeks ago. She is doing her job as she feels is right and I say that as a responsible governmentJapan  like to think that it is important to the government Japan will decide on this matter to the best of its ability based on the best of information. And I am grateful for the sincere discussions I have been able to engage with the senior members of the Lankan government and my ambassador stations in Colombo is in constant touch with members of the government and civil society. So on the basis of this we will make our own judgment and take our position which we will express without hesitation in Geneva” he said. (Hafeel Farisz)
DM