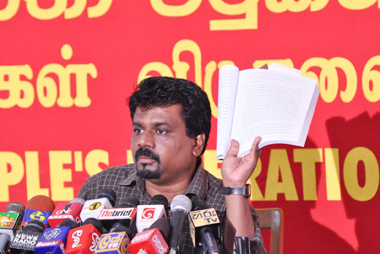 The government that levies high taxes from masses is having car races with the money that is plundered and the real state of this fraudulent government should be exposed to the country says JVP Parliamentarian Anura Dissanayake.
Speaking at a press conference held at the JVP head office at Pelawatta today (17th) Mr. Dissanayake said, “2013 is the 8th year of the Rajapaksa regime. The UPFA has ruled this country for 16 years. What the masses are receiving now are the returns of 16 years of SLFP lead PA administration and 8 years of rule by the Rajapaksa regime.

The masses could be optimistic regarding economic results when any government rules a country for 7 years and goes for an eighth budget. However, during the 7 years of rule of the Mahinda Rajapaksa regime the country was dragged into the deepest economic abyss. The Deputy Minister of Finance Sarath Amunugama has said there is no other alternative to the country other than getting loans and printing money. The expected income of the government for 2013 is Rs.1303000 million. There is a difficulty in a government earning the full expected amount.

The income could be often 10% less. As such, the expected income of the government is equivalent to the amount the government expects to get as loans. In other words when the government balances the economy with its income for 6 months it depends on the loans it obtains to spend the balance six months. This is the sorry state the Mahinda Rajapaksa regime has brought our country down to.

Recently the Commissioner General of Department of Probation and Child Care Services had said nearly 40,000 children in Sri Lanka do not receive any education due to severe economic hardships and nutrient deficiencies. This is where Mahinda Rajapaksa has brought our country down to. On the 11th the Secretary to the Ministry of Finance has convened a meeting of all secretaries to ministries. At the meeting secretaries have been instructed to cut off all re-current expenditure stating that the government is confronted with a severe financial crisis. Instructions have been given to cut off overtime, subsistence and fuel allowances. The state employees make their ends meet from various allowances they get, as the salary they get is very little due to various deductions. Now, P.B. Jayasundara asks secretaries of ministries to cut off these allowances. This government has dragged the masses into a very difficult economic position. Petrol prices are increased under such an environment.

The port and aviation tax is 5%. Pot charges are 2.79%. Then the liter of petrol that cost Rs.89 at the port goes up to Rs.95.91. The government levies an extra tax of Rs.25. The Petroleum Corporation charges Rs.1.50 as service charges. The profit of the petrol shed owner is Rs.1.25. When profits and service charges are added a liter of petrol would cost only Rs.129. The Corporation adds another profit of Rs.30 to this amount. Which means Ceylon Petroleum Corporation steals Rs.60 from a liter of petrol. When you pump 2 liters of petrol to your vehicle you pay a tax of Rs.120 to the government. This is how the government levies taxes from day to day needs of the people and earns its income.

Nearly 80 million liters of petrol are sold every month. If the money that the government cheats from a liter of petrol is Rs.60, it gets a profit of Rs.4,800 million for a month from petrol only. For a year this income is Rs.56,000 million. Petrol, instead of becoming a general consumer item of the masses has become the main source of income of the government. The number of families living in our country is about 5 million. Every family in our country has paid Rs.11,000 as tax for petrol. Nearly Rs.1000 is paid as tax for petrol by every family every month.

The Minister of Petroleum Industries Susil Premajayanthe says the tax is levied for petrol as the Corporation has to incur a big loss due to making available fuel to the Ceylon Electricity Board. 1/3rd of the distribution of fuel in the island belongs to IOC. However, IOC doesn’t give fuel to the CEB. As such, IOC earns a very big profit. We would like to ask from those gentlemen who speak about 13th amendment and the Indian economic expansion whether the government pays a profit of Rs.30 to the Indian company. The Indian company takes away money of the country as dollars. The IOC definitely gives commission to those who take these decisions. What has become government’s priority while petrol prices have been raised? Roads in Colombo are closed and car races are held.

There are two million young people who have A/L qualifications. They are unemployed. Offspring of farmer parents have no lands to cultivate. Those who have abilities do not have money to begin a business or an industry. The youth of the country have been trapped in an unemployment debacle. However, the government spends large amounts of money to hold car races. Colombo city which is the economic center of the country is closed to hold car races. This is an idiotic government that closes the roads of its economic center to hold car races. This could have damaging effects on our economy.

Normally car races are held in special tracks. However, in Sri Lanka the city which is the economic center of the country is closed to hold such races.

In 2013 budget it is stated that special vehicles used for racing sports will be exempt from import tax. However, Carlton Motor Sports Club orders racing cars even before the budget is presented. ‘Carlton’ is the brand name of Mahinda Rajapaksa family. The whole country knows it. This sports club is the sports club of Rajapaksa’s offspring. They knew tax for racing cars would be reduced from the budget. The father, who is the Minister of finance, has revealed budget secrets to his sons. Is this the conscious of the President? He doesn’t work according to the Constitution or the law of the country but according to his conscious. Do these agree with his conscious?

Carlton Motor Sports Club imports 19 racing cars – 2 Lamborghinis, 1Porsche racing car, 13 Etios Motor Racing Cars and one each of Aston Marti, Nissan Fairlady and Honda Civic. The cost of these cars is Rs.93.3 million. Nearly US$800,000 goes out of the country. As import tax has been removed the country loses Rs.200 million. The tax relief for his sons is Rs.200 million. What kind of a leader is he? The government does not have money to increase the salaries of state employees by Rs.2500. The government that does not listen to the woes of farmers and fishermen has given budget relief to their sons.

When port and aviation tax and port charges are added to import tax the whole amount the country loses due to the import of vehicles for Rajapaksa offspring is about Rs.202.2 million. Not a single cent of this money has been paid. Carlton Motor Sports Club has paid only Rs.2500 to remove 4 containers. They have wriggled through the customs regulation called CARNE ATA, an international customs document and title guarantee both, used in trade in goods between the Community and third countries, regardless of transport used to facilitate crossing the border for customs and the temporary importation without paid taxes and customs charges. According to this regulation a foreigner could bring his vehicle to Sri Lanka after depositing an amount in a bank. The customs doesn’t make any charges. However, the vehicle should be taken out within 6 months. If the vehicle is not taken back customs duty is levied. Rajapaksa sons have wriggled through this regulation. The Director of Customs can extend the period when the Minister of Finance makes a request. The Minister of Finance is President Mahinda Rajapaksa. Recently the President had said law is equal to all and the law should be implemented without any favour. However, a few days after this statement he says the Chairman of NSB fell into trouble due to a fraudulent share transaction but they intervened and saved him. This is how the President saves his people. What wouldn’t such a President do for his sons?

Many questions come up now. Where did Rajapaksa offspring get Rs.93.3 million to buy racing cars for their motor club? How did Namal Rajapaksa get such a big amount? He is only an A/L qualified person. How did they get a bank guarantee for Rs.2022 million as taxes? Has Namal been employed? These secrets should be revealed to the country. The Galle road was carpeted for car races. Who spent money for it? 15 million sand bags were placed on either side of the road. The money collected from masses as taxes are wasted on these pointless activities. Poor parents in the villages are levied various taxes – fair tax, when a roof is fixed to a lorry a tax of Rs.56,000 has to be paid. The marriage registration fee has been increased from Rs.1000 to Rs.5000. A copy of an old birth certificate could be obtained only by paying Rs.2000. The money plundered from people this way is wasted so that his sons could have car races.

The administration Mahinda Rajapaksa is carrying out is such an idiotic and vulgar administration. The economic crisis is further widened by the wrong economic policies carried out by the government. Shouldn’t the youth of this country oppose this government? It is a government that cannot find employment for youths; a government that taxes the marriages of the youths. Why shouldn’t they have to struggle against these injustices?

The President has said he is a father to everybody. It is only a lie. He is father to his sons and a selected few. He is the step father of other children. Hence, all lies, frauds and bluffs should be exposed.