PC election Post-mortem JVP: Whatever the result is masses will have to take to the streets 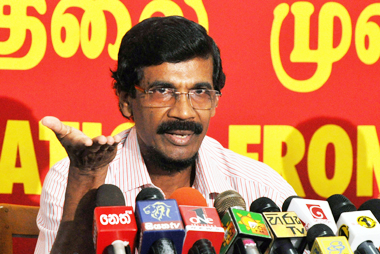 Whatever the results of the election is and whatever the reason are for voting for the government, those who voted for the government and also those who abstained will have to take to the streets soon to defend their rights and win other rights says the General Secretary of the JVP Tilvin Silva.
Speaking at a press conference held at the head office of the JVP at Pelawatta today (9th) afternoon Mr. Tilvin Silva said, “The President, the ministers and government Parliamentarians gave bribes of various kinds from boxes of matches, water pumps, to roofing sheets to the public, used state resources, power of the government and also provincial councils, state media as well as other media to hold the provincial council election. It is not an election held with equal opportunities to all. We explained to the masses at the outset that it is an attempt to plunder the votes of the masses by arbitrarily holding the election which the people didn’t ask for. The UPFA wins the Eastern, North – Central and Sabaragamuwa provincial councils in such an environment. What would happen to the masses once the government has won the election? In the past the government won elections but the people did not get any benefits. Similarly, masses would not get any benefits from government’s victory. Slashing of education and health services will continue. The Prices of essential goods would go up. The masses will confront various difficulties. The waste of public money, frauds and corruption would continue. However, relatives and associates of ministers who contested the election would get various benefits spending public money.

The people should have thought about these when using their votes. However, they failed to consider these facts due to various reasons. Some voted to get things done from the government. Also, some voted due to fear of reprisals. Whatever the reason was for voting for the government, those who voted and also those who abstained will have to take to the streets soon to defend their rights and win others. The JVP is prepared, as it had been always, to give leadership to struggles masses carry out to protect or win their just rights. The present election result is not an obstacle for giving leadership to such mass struggles. Taking part in election is only one strategy of the JVP. The JVP is not a political party that has in its agenda contesting elections only nor does it flee from elections. Using elections to win democratic rights of the masses is in the JVP agenda.

We admit that the number of votes for the JVP has decreased when compared with previous provincial council elections. However, we emphasize that this state would not be an obstacle for us to give leadership to the struggles of masses. The mamoties and roofing sheets given as bribes to plunder votes would start rusting from tomorrow. However, farmers’ struggle for compensation for their destroyed fields would flare up. The struggle of the university dons will continue. The government will continue to close down schools and opposition to this would spring up. Students who have been selected to universities will have to struggle to get their issues solved. Graduates will have to struggle to get employment. None of these issues will be solved just because the government has won the election. This is why we say the election result is not an obstacle for the JVP to give leadership to struggle of the downtrodden masses.

The JVP was able to use the election campaign to have a broad dialogue with the masses. We were able to give them political knowledge. We had broad discussions with masses on the breakdown of the economy, the social and cultural decline and the increase of crime in the country. We hope to continue this dialogue with the masses in districts where the elections were held. We would soon prepare programme for this. We emphasize that genuine solutions for people’s issues could be found only by changing this capitalist ruling system. We are definite that masses will comprehend this reality. The JVP, like in the past, is prepared to make any sacrifice to give leadership to make people’s struggle victorious. We know that the government and certain individuals would be delighted with election results. However, their delight and thrill would not affect the preparedness of the JVP to give leadership to find genuine solutions for the issues of the masses. We assure that the JVP would carry out its struggle on behalf of the masses and until masses achieve true victory.”

Responding to questions posed by journalists Mr. Tilvin Silva said, “The government used various tactics to win the election. They made use of low tactics such as communalism and caste. The JVP never carried out such tactics that are serious threats to the society. It is not our policy. We told the people the truth about the present situation and what would happen in the future. The people may not comprehend the situation now but we are definite they would understand it tomorrow.

We know that a group leaving the party would affect any political party. We don’t believe that it is the only reason for the JVP to lose its votes. Our party has confronted various challenges and repressions from 1971. In 1983 the party was banned and during the  88-89 period enemies tried to destroy the party by murdering many of our comrades including Comrade Rohana Wijeweera. However, all those attempts failed. If anyone thinks that the political path of the JVP would be stopped due to decrease of votes, it would be only wishful thinking. From 1965 to 1981 we did politics in the country without taking part in any election. Taking part in elections is only one strategy of the party. We would make the masses that struggle for their just struggle aware and strive to change this socio- economic system. The JVP need not artificially do anything for it to go forward. This state could be changed by giving leadership to struggles of the masses.

History has shown that a government cannot be in power for ever. No government is perpetual. Winning elections would be useless if there are no solutions for the issues of the people. We know what happened to the UNP which ruled continuously for 17 years. Also there are many examples internationally. In Tunisia mass struggles toppled the government despite winning elections. Ben Ali, the ruler of Tunisia was chased away by mass struggles. Also, Hosni Mubarak in Egypt won elections. However, people toppled him through democratic uprisings and today he is a prisoner. Hence, the JVP has no need to be in a hurry.”

The Information Secretary of the JVP Vijitha Herath and the Member of its Political Bureau Anura Dissanayake were also present.
LT