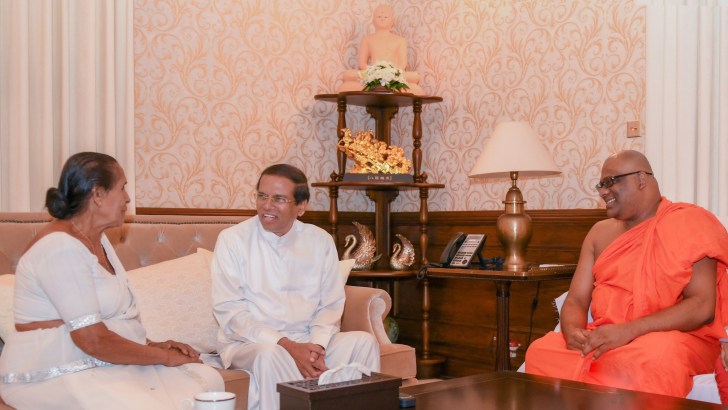 Image: Sirisena invited Gnanasara and his mother to his office after pardoning him.

20th of June 2019: The Centre for Policy Alternatives (CPA) and its Executive Director, Dr. Paikiasothy Saravanamuttu, filed papers challenging the Presidential Pardon of Gnanasara Thero who was convicted for contempt of court by the Court of Appeal on 8th August 2018. He was sentenced to 19 years of rigorous imprisonment to be completed within 6 years.

CPA notes that the Constitution does not permit the President to act in a manner that undermines and erodes the independence of the judiciary in exercising his right to pardon under Article 34 of the Constitution. Further. after the Nineteenth (19th) Amendment to the Constitution came greater accountability as President’s action (except for the exercise of power to declare war and peace) is reviewable by way of the fundamental rights application before the Supreme Court.

CPA reiterates that grant of pardon for Gnanasara Thero for contempt of court frustrates the power of the judiciary to maintain its authority and upholds its dignity and the rule of law. It is submitted that therefore, that fundamental rights guaranteed under Article 12(1) [ All persons are equal before the law and are entitled to equal protection before the law] has been violated.